Cable Access Network Capex in for a Lumpy Ride

DENVER -- CNG2019 -- Cable operators will continue to invest in network capacity in the years to come, but spending levels on access infrastructure are expected to be somewhat sporadic as MSOs weigh how -- and how quickly -- they will start to migrate to a distributed access architecture (DAA).

Some of that unevenness showed up in last year's fourth quarter -- usually a strong quarter for spending, marked by the flushing of budgets before the end of the year -- which was weak overall in terms of capex outlay.

"We're starting to see some lumpiness in spending," Jeff Heynen, research director for broadband access and home networking at Dell'Oro, noted during the recent Cable Next Gen event as he relayed his forecast for the cable access market. 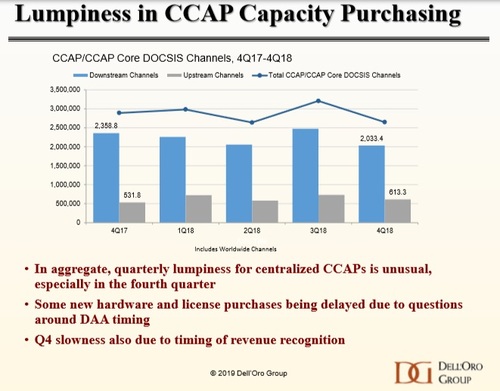 He said a portion of that quarterly weakness can be traced to the fact that several cable operators were still evaluating their technology and product decisions for the transition to DAA, an emerging architecture that will see operators pull fiber closer to the premises and deploy more electronics and other functions out towards access nodes and the edge of the network. In addition to expanding the reach of digital signals that will put more capacity on the network, reduce latency and pave a path to Full Duplex DOCSIS and symmetrical multi-gigabit speeds, DAA is also designed to spread out and cut down on space and powering requirements compared to today's more centralized HFC networks.

However, in aggregate, Heynen said the purchase of downstream channel capacity via licenses (activating and turning up latent ports on already-deployed cable access equipment with software upgrades), new line cards or new chassis shipments over the past three to four years has remained strong. Heynen, for example, noted that there was a 60% surge in DOCSIS 3.1 downstream channel shipments in 2018 as operators such as Comcast and Charter Communications completed their D3.1 network rollouts.

Ahead of the transition to distributed architectures, Heynen expects capacity purchases for today's centralized CCAPs (Converged Cable Access Platforms) to peak in 2019, then begin to slow down as DOCSIS-level investments begin to spread out toward the edges of the network in the form of new nodes and remote PHY device deployments, node swaps and node module upgrades.

Driven by the DAA transition, the overall market -- which includes CCAP cores and chassis, remote PHY devices and a new class of virtualized CCAP products that will operate on off-the-shelf servers -- is expected to reach $1.94 billion in 2023, up from the $1.65 billion to $1.7 billion expected in 2019, according to Dell'Oro's latest projections.

That will also coincide with the expected ramping up of Full Duplex DOCSIS deployments from 2021-2023, Heynen said.

Ovum's forecast also sees a rise in CCAP and cable modem termination system (CMTS) spending to coincide with the expected rollouts of next-gen DOCSIS technologies that include Full Duplex DOCSIS and variants that will not require "node-plus-0" scenarios that eliminate the amplifiers between the node and the home as fiber is deployed deeper into the network. 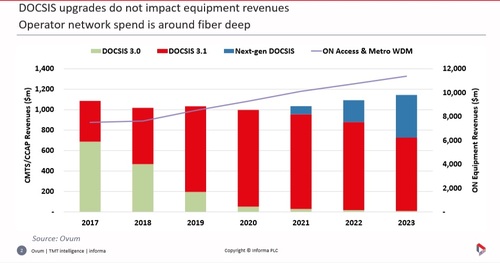 "We believe Full Duplex will be a viable solution," noted Jaimie Lenderman, senior analyst, network infrastructure, at Ovum. "However, some operators see a capex-intensive or difficult business case for node-plus-0, so we're seeing alternatives from vendors right now."

Of note, CableLabs and its MSO and vendor partners are seeking out ways to deliver the multi-gigabit symmetrical capabilities of Full Duplex DOCSIS with one to four amps between the node and the home. (See CES 2019: Cable's 10G Tech 'Will Work' and Arris CTO: What's next for DOCSIS?)

Ovum's data also shows that 1-Gig broadband services have rapidly become the norm and that there's no slowdown in user appetite for capacity and bandwidth. As of December 2018, Ovum's global survey found that 234 operators now offer speeds of 1 Gbit/s or more, Lenderman said.