LOUISVILLE, Colo. – A critical piece of Comcast's Full Duplex DOCSIS (FDX) strategy will start to fall into place by mid-year, when the operator takes possession of a prototype of an FDX Amplifier.

If the product works as advertised, the FDX Amplifier stands to change the game for Full Duplex DOCSIS (FDX), enabling Comcast to deploy the technology across the bulk of its hybrid fiber/coax (HFC) networks. 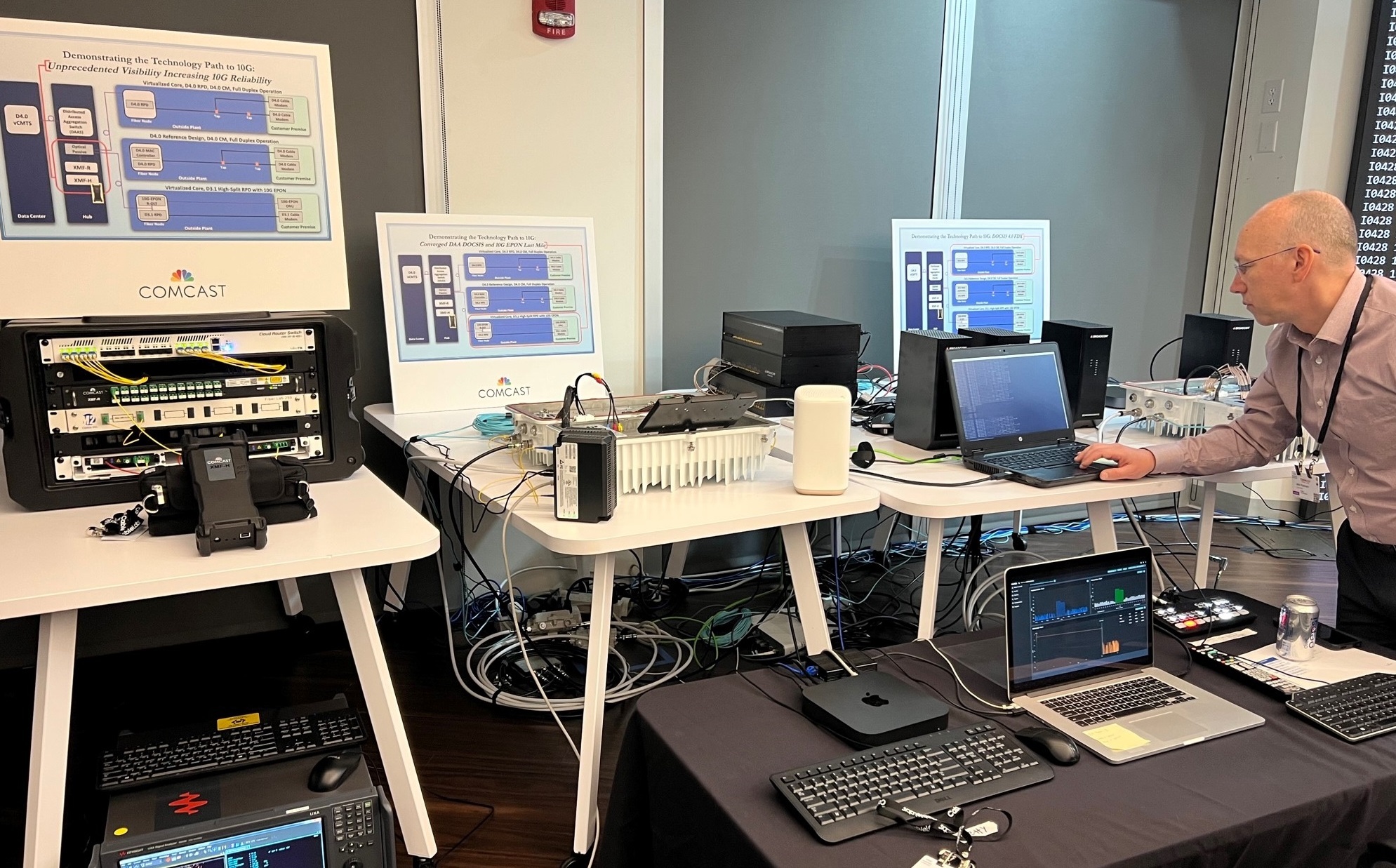 The aforementioned FDX Amplifier prototype did not make an appearance at last week's "10G Showcase" at CableLabs, but Comcast did present a set of demos that showed off its latest DOCSIS 4.0-related handiwork.
(Source: Jeff Baumgartner/Light Reading)

Full Duplex DOCSIS, a flavor of D4.0 that allows upstream and downstream traffic to run in a shared block of spectrum, was originally developed for so-called "fiber-deep" HFC networks where there's no amplifiers between the home and the node – something cable engineers refer to as an "N+0" architecture. By housing the necessary echo-cancellation capabilities in the amplifier, rather than only in the node, the FDX Amplifier will put Comcast in a position to deploy Full Duplex DOCSIS in HFC networks that are not upgraded to N+0.

Comcast has a blend of N+0 and N+X architectures deployed, but declined to detail the composition of its current HFC network. As a possible reference point, Charter VP of Engineering John Williams said here last week that N+4 is "pretty typical" of the HFC network composition today at Charter.

Comcast hasn't formally signaled when the FDX Amplifier will be ready for commercial deployment, but it's clear that the product is well down the road of development.

Noting that a study group focused on the FDX Amplifier kicked off in 2018, Rob Howald, Comcast's VP of network architecture, said work on the technology has accelerated in recent months. The current expectation is that Comcast will have FDX Amplifier prototypes in the lab by July 2022. That tracks with an expectation expressed at last year's SCTE Cable-Tec Expo, when Comcast engineering execs estimated that FDX Amplifier trials could begin in 2022, with deployments possibly to follow sometime in 2023.

A key aim, Howald said, is to be able to drop FDX Amplifiers into existing amplifier locations on HFC networks built to 1GHz or 1.2GHz, while keeping the existing coax and passive devices in place. "It's a big focus for us to make that happen," he said.

"We feel really good about being able to deliver an FDX Amplifier into an architecture that is not N+0 in the Comcast footprint," Howald said. "You're going to hear a lot about that in the second half of the year."

Howald declined to pinpoint how close Comcast is to getting the silicon that will power FDX Amplifiers, noting only that the operator is "working closely" with chipmakers to get that piece added into the ecosystem as quickly as possible.