After its reputation was badly tarnished by the Cambridge Analytica scandal, Facebook needed a communications expert with the kind of trustworthiness and integrity that could win over the skeptics. So for its new head of global affairs, it's picked Nick Clegg, a man so unpopular he can't even win a parliamentary seat for the UK political party he once led. (See Facebook: The Sick Man of Silicon Valley.)

For those in the dark, which probably covers most people outside the UK, Clegg is the UK's former deputy prime minister. Way back in 2010, he took his Liberal Democrat Party into a coalition government with the Conservative Party, then led by David Cameron, even though the Liberals weren't supposed to agree with anything the Conservatives stood for. He measures up to Cameron for sheer blandness, but actually looks like a children's TV presenter who has grown up and put on a suit. 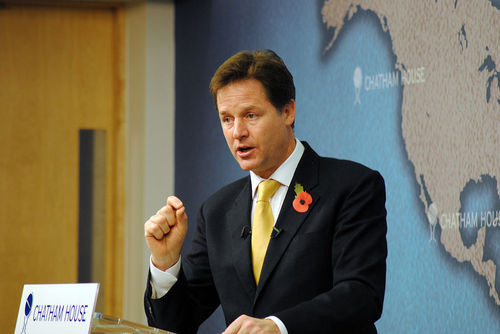 Don't be fooled into thinking those boyish looks give him any kind of street cred, though. He's a knight of the realm, for one thing ("Sir Nick Clegg" to mere mortals). He's also one of those middle-aged types who brags about his sexual exploits, claiming to have slept with "up to 30 women." And while the Liberals are supposed to be a party that appeals to younger voters, support for it collapsed when Clegg broke an election promise to oppose any rise in student fees. If they know who Clegg is, most young people now regard him in the same way a teenager views Facebook: desperate to remain cool and relevant like an embarrassing dad; best avoided.

To the possible relief of his former constituents, Clegg won't be hanging around the UK for much longer. He's off next year to the Facebook headquarters in Menlo Park, where his plummy British accent might do him some favors if he can ditch the politician's wardrobe without going all-out Zuckerberg.

Clegg had this to say, according to the BBC: "Having spoken at length to Mark and Sheryl [Sandberg, Facebook's chief operating officer] over the last few months, I have been struck by their recognition that the company is on a journey which brings new responsibilities not only to the users of Facebook's apps but to society at large. I hope I will be able to play a role in helping to navigate that journey."

Inspiring stuff, eh? You do wonder how appointments like this are made. It's presumably the same kind of logic that powers the merry-go-round in soccer management, where inept managers move from one club to another until they've exhausted every option and eventually retire as wealthy old curmudgeons grumbling about press intrusion into their private affairs.

In fairness to Clegg, he probably knows lots of other politicians and important people around the world. That's what happens when you've been deputy prime minister of an ex-world power like the UK.

Coincidentally, Clegg's appointment came in the same week lots of Facebook types were in London for this year's TIP Summit. TIP, or the Telecom Infra Project, is a Facebook-led initiative to shake up the equipment sector in the telecom industry. Facebook appears to think traditional network equipment suppliers deserve only a C-minus when it comes to providing decent products at low cost. If it can get everyone up close and personal in a big mosh pit of innovation, networks might even get built in out-of-the-way places like, well, Africa. Then even more youngsters will go online and hopefully sign up to Facebook before they realize that -- with a man like Clegg in charge of global affairs -- it's not somewhere you want to spend much of your free time. (See Terragraph: A WiMax in Facebook Clothing?, Telecom Italia Building vRAN Tech, but Not With Ericsson, Ericsson Weighs ORAN Alliance Membership, TIP Forms New Edge Computing Unit, Has TIP Made Networks Sexy to VCs?, TIP, ORAN Alliance Poised to Join Forces on Open RAN and TIP Offers Progress Report at Summit.)