Immobilized by train strikes this week, many of London's frustrated commuters and their employers can be thankful for the railway's modern-day infrastructure equivalent. The sophisticated broadband networks that transport zeros and ones instead of people have turned the average UK home into a hi-tech office. Zoom calls and coffee breaks with family members or housemates replace office meetings and watercooler conversation. Commuting is for the post-work pub trip with colleagues – not work itself.

Yet all is not well in UK broadband, according to research carried out by Point Topic, a firm of analysts, and the Financial Times, the country's best-known business newspaper (subscription required). A gold rush for the most lucrative neighborhoods is transforming the UK into a land of high-speed haves and have-nots. Today, around 5 million properties have access to at least three providers using full fiber, a broadband bullet train next to the steam engines of the old copper wires. But as many as 10 million homes lack a single full-fiber option, says the research. 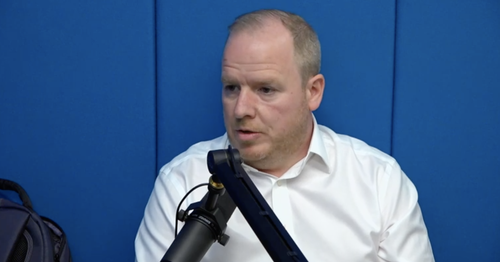 Giganet CEO Jarlath Finnegan has £250 million to use for full-fiber rollout.
(Source: Telecoms.com)

This raises concern that some parts of the country are being neglected while broadband spending flows wastefully into well-served communities. Overbuild, where multiple fiber networks are deployed in the same streets, means there are likely to be 80 million full-fiber connectivity options for the UK's 31 million homes by 2030, according to Point Topic and the Financial Times. Under existing plans, some 1 million homes will have been overlooked while 3 million may have a choice of more than five providers.

It would not be a surprise if the findings prompted calls for government intervention, aimed at redistributing the broadband wealth. But any such action would be ill-advised. Far from being broken, the UK broadband market is probably in its healthiest state ever, and it certainly warrants less attention from Boris Johnson, the UK's prime minister, than railways or the busted energy sector. While broadband is not perfect, the fears outlined in the Financial Times report are overblown.

Toward a full-fiber diet

For starters, overbuild is preferable to underbuild, when a monopoly provider such as BT's Openreach division is the only choice across the entire country. This has been the historical norm for the fixed-line telecom sector. The dearth of infrastructure competition gave Openreach no market incentive to invest in full-fiber networks. Until a few years ago, BT was still promoting Gfast, a copper-based technology, as a worthy alternative. The UK was stuck at the bottom of European full-fiber rankings.

The Financial Times asserts that authorities stimulated competition by stopping BT from slashing prices. What happened, though, was nuanced. As the owner of the wholesale Openreach and a broadband retailer to boot, BT was previously able to squeeze competitors reliant on the Openreach network through a combination of high wholesale rates and low retail prices. But regulatory intervention arguably just made companies piggybacking on Openreach more commercially viable.

There are several other explanations for the surge in broadband investment, and they are not exclusive to the UK. First, a certain class of investor was drawn to fiber stocks as a relative haven while government bonds were becoming less attractive. In support of this trend was the ascent of Big Tech companies dependent on broadband infrastructure. Back in 2009, the world's ten most valuable companies by market cap were mainly in the finance and energy sectors. Only Microsoft made the list from technology. At the end of March this year, that list featured Apple, Microsoft, Alphabet, Amazon and Meta, as well as Nvidia and TSMC from the chipmaking industry.

The recent pandemic has served to highlight the importance of broadband infrastructure to any modern national economy. Like a drawn-out train strike, COVID-19 drove people off the streets and into homes where broadband became a vital link for work, play, education and socializing. Without it, lockdowns would probably not have been socially or economically viable.

CityFibre has been the main fiber catalyst in the UK. Backed by investors including Goldman Sachs, it has secured £4 billion ($4.9 billion) in funding to extend full-fiber networks to about 8 million premises by 2025. That, in turn, has galvanized dozens of other "altnets" as well as BT. Spotting that its copper lines could be eclipsed by fiber rivals, the incumbent has suddenly prioritized broadband investment over TV sports rights, its former obsession. By 2026, it will have spent more than £12 billion ($14.7 billion) on building full-fiber networks to about 25 million homes – assuming all goes to plan. 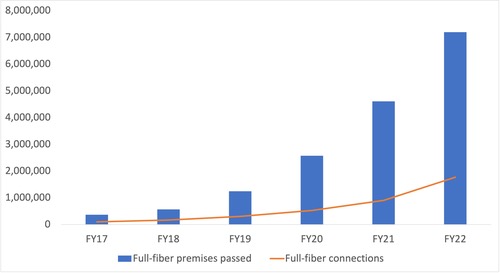 For sure, today's market features too many players, and some of those in popular overbuild areas will not survive. But if there is an unresolved question about how much overbuild is economically sustainable, no wise investor will dig streets in a community already served by four full-fiber networks. Giganet, a UK altnet that has secured £250 million ($306 million) in private-sector funding to connect around 300,000 properties, is deliberately avoiding neighborhoods where a full-fiber network exists, said CEO Jarlath Finnegan on a recent Telecoms.com podcast.

Other altnets are taking a similarly prudent approach, he thinks. And so the main overbuilder is likely to be Openreach, whose target of 25 million properties accounts for more than 80% of the UK total. Publicly available Point Topic data for the end of April shows that Openreach had then passed only about 6.9 million of these premises, and that CityFibre had covered nearly 1 million homes. Overbuild is rising. Some 14 local authorities had three overlapping networks, up from 11 in February. But as the fiber runners reach later stages of the race, some will drop out as plans inevitably change and consolidation sweeps the sector.

Indeed, a scenario envisaged by Finnegan is a market eventually comprising three or four big UK providers – Openreach; CityFibre; Virgin Media, a cable company shifting slowly to fiber; and other altnets. If there is limited overlap between many of these various altnets, merger activity might conceivably bring them together like pieces of a jigsaw. Four separate national mobile networks survive by sharing infrastructure (although there is talk of a merger between Vodafone and Three). A market of three or four fiber players using many of the same ducts and poles does not immediately sound unworkable.

What of those left behind in underserved communities? The private sector can hardly be blamed for ignoring out-of-the-way places, nor are they the only types of business that avoid remote or poorer regions. Yet the percentage of homes that miss out on private-sector investment is likely to be relatively small. The Openreach plan alone overlooks only one in five UK properties.

Authorities, meanwhile, have earmarked about £5 billion ($6.1 billion) in public-sector funds for the harder-to-reach 20%. It is a dubious use of taxpayer money – previous schemes have been inefficiently run and only a much tinier percentage of homes lacks the connectivity needed for essential Internet services. Ofcom, the UK regulator, estimates that 96% of properties can now access a "superfast" service, meaning one of at least 30 Mbit/s.

A BT service promising "normal" download speeds of between 32 and 56 Mbit/s is good enough for a household of teenage gamers and Netflix addicts, your correspondent can attest. If people agree 8K TV is not a universal human right, the government should not be subsidizing broadband rollout to anything more than 4% of homes.

Four years ago, just 4% of UK properties had access to a full-fiber connection, according to Ofcom data. Thanks entirely to the private sector, a third of homes enjoyed that benefit at the start of this year and the figure is rising quickly, up five percentage points between September 2021 and January 2022. Amid persistent grumbling about Brexit, train strikes and various problems stemming from lockdowns and the war in Ukraine, fiber rollout is a rare contemporary success story for the UK. The biggest contribution this government has made is to have stayed largely out of the way.

Like what we have to say? Click here to sign up to our daily newsletter
COMMENTS
Newest First | Oldest First | Threaded View
Add Comment
Be the first to post a comment regarding this story.
EDUCATIONAL RESOURCES
sponsor supplied content
Small cell densification for 5G
Which Path to Convergence Is Right for You?
Helping FTTx Networks Like Yours
Educational Resources Archive
More Blogs from Morris Lore
India's 5G market dashes early hope for open RAN, local vendors