Telstra Preps Service Catalog in Bid to Be Telco AWS

MADRID -- Zero Touch Automation Congress 2019 -- Telstra's Johanne Mayer screws up her face in distaste when she talks about spaghetti. "We started with one technology and added another and then NFV came along and helped us add more spaghetti lines," she tells attendees here in the Spanish capital. "It was supposed to make things easier and cheaper because it would build on white boxes, but in terms of management it is more spaghetti lines and that makes it hard to deliver anything fast."

The Australian operator's grand plan is to get rid of as much spaghetti as possible, replacing it with something more akin to lasagne (see the Telstra slide below). Under a project called NaaS 2020, it has started a major clean-up of its business and operational support systems (B/OSS) and has thrown its considerable weight behind the TM Forum's open APIs initiative as an answer to the problem of growing service complexity. 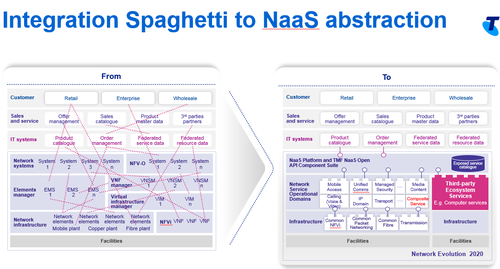 On the left, spaghetti -- on the right, lasagne. (We didn't ask about the rigatoni...)

Mayer, a so-called "evangelist" for the NaaS 2020 project, says the B/OSS overhaul means stripping out all knowledge of resource-level information and providing this only in the separate service domains -- whether mobile access, unified communications, managed security or something else. "Instead of keeping the spaghetti mess, we will make the IT systems lighter," she says.

The other mess is the duplication in the services area. Peruse Telstra's catalog of enterprise services today and you would find at least six products using a different firewall. What this means is that every separate product manager is creating a whole service stack with its own firewall supplier. In other words, the Internet security product comes with its own firewall, the intrusion security protection service provides another, and so on. It is all highly inefficient, says Mayer.

The solution is to create a bumper catalog of smaller, reusable services that can be deployed across different domains and eventually exposed to customers, she says. "What we are building as an operator is a catalog, just like AWS, of services that can be reused by another domain. This is what we are doing."

So how far has Telstra got? As things stand, it has built a network-as-a-service platform that functions as a kind of API gateway and knows where the different services reside. Today, that is for internal use only, allowing one domain to order services from another, but it will eventually be opened to customers. Mayer thinks the scheme could slash the time spent on creating new products from 12-18 months to between four and six. 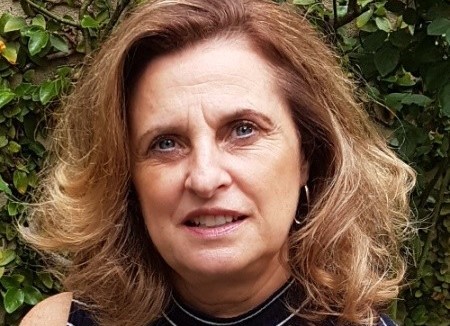 Telstra's Johanne Mayer: "What we are building as an operator is a catalog, just like AWS, of services that can be reused by another domain."

But there are still hurdles to overcome. Above all, Telstra needs to secure backing for the TM Forum's open APIs amid apparent signs of vendor resistance. It is precisely because vendors have clung to their own APIs that different product catalogs have been hard to reconcile, Mayer indicates.

"They all speak different languages and have to adapt to different systems that have their own way of speaking, and their own APIs, and that is because the suppliers say they have better APIs than the TM Forum APIs. That means we need a systems integrator to adapt to your better APIs  this is why I participate in standards -- to alert you to these things we actually need," she told an audience that included representatives from various network vendors.

Getting the industry to "congeal" around defining common interfaces can be like trying to "herd cats," Mayer told a panel session at the event on Wednesday morning. But Telstra hopes such efforts will ultimately enable it to rely less, and spend less, on systems integration, an objective other service providers are likely to share. "In a project when you buy kit, 80% of the cost goes on systems integration and 20% goes on buying features," says Mayer. "We want to pay 80% for the features and have 20% for adapting and getting it into the network."

Related to all this, her other big frustration is the pace of development on standardization that would support some of Telstra's service-oriented goals. "There is no such standard as firewall-as-a-service and I am looking for a forum where we can agree on these things and speak the same language," she says. "The MEF [Metro Ethernet Forum] is addressing some of that but not all of it, and it is painfully slow."

With AWS encroaching further into telco territory, that is a message that service providers everywhere will appreciate.