The demonstration was as smooth and uneventful as anyone could have hoped. A vast screen showed two video streams of the same footage, one stuttering and fuzzy. Using a separate monitor and PC, a technician selected a bandwidth upgrade from a drop-down menu. Minutes later, and with minimal fuss, the video quality was restored.

To the casual observer, it was not exactly the moon landing on the excitement scale. But it was a giant leap for network automation, where the less dazzle the better. Previously, an enterprise customer of a telco trying to upgrade an off-net connection would have faced a byzantine process and a long wait. This week it was done with the click of a mouse.

This was only a trial of what network partners Colt Technology Services Group Ltd and Verizon Communications Inc. (NYSE: VZ) are calling "cross-carrier automation." But it was carried out on production networks at Verizon's office in central London, with technicians playing the role of the customer, and points the way toward a full commercial offering in the near future.

"We have a development project running to 'productize' capability and plan to finalize that by the end of the second quarter," says Peter Konings, the head of Verizon's product development business in Europe, in response to questions from Light Reading. "We will then go to market with Colt and we've started to work on this with other partners." (See Verizon Lays Out Virtualization Demands.) 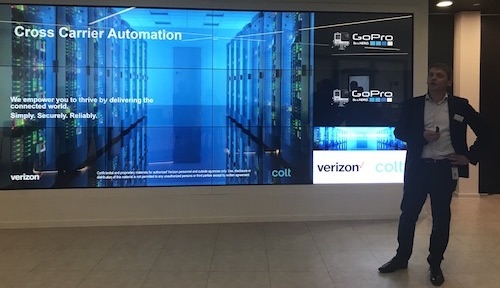 Given enough push, such cross-carrier services could be available from a number of operators by late 2019, says Mirko Voltolini, Colt's vice president of technology and architecture. Besides working with Verizon, the UK-based operator is in talks with AT&T Inc. (NYSE: T) and Orange (NYSE: FTE) about commercial tie-ups, he tells Light Reading.

But a lot needs to happen before then. Their investments in software-defined networks -- allowing operators to separate the brains of the network from its muscle, and then centralize that intelligence -- have underpinned the rollout of more automated services in a single carrier environment. For that, operators can thank progress on the standardization of the "northbound" network interfaces with business applications, as well as the "southbound" ones to routers and switches. With cross-carrier automation, the real challenge is on the "east-west" interfaces between partners and customers, says Konings.

"We need to be able to scale this, and that is where standardization comes into play," he says. "We must work with partners and standardization bodies to push that message."

Enter the Metro Ethernet Forum (MEF), whose representatives were tellingly in attendance at the Colt-Verizon demo. Recently lauded by Germany's Deutsche Telekom for its standardization efforts, the MEF has been developing two "east-west" interfaces called Sonata and Interlude as part of its MEF 3.0 platform. Sonata supports automated service checks between network partners, covering things such as billing and ticketing, while Interlude handles interactions like bandwidth changes, and can check on problems with real-time service delivery. (See DT Demands Automation, Cloud Tech From Pan-Net Suppliers.)

The MEF's mission, and that of supporters like Colt and Verizon, is to popularize these technologies. "We need to make sure the work done on inter-carrier APIs [application programming interfaces] will actually be adopted by the rest of the market," says Daniel Bar-Lev, director in the MEF's Office of the CTO. "If others don't offer this, an operator will have a limited range of partners that can actually offer a customer these dynamic services."

Operators also face a lot of heavy lifting on the commercial front. The rollout of cross-carrier on-demand features will have implications for billing and marketing, for instance. "Typically we would bill the customer in advance," says Konings. "As soon as you allow dynamic changes this is not possible because you don't know what you are billing for." The provision of services in minutes, rather than days or weeks, will also necessitate changes to the service level agreements that operators guarantee their customers. "As you automate and rely more on APIs, what happens if something fails? How do you deal with that?" he says.

Moreover, while Colt and Verizon are touting this as a fully automated service, Colt's Director of Architecture and Development Fahim Sabir says there is still work to do on the integration with other platforms, such as the customer relationship management system. Even so, the machine-to-machine processes shown off in London should cut out the phone calls between operators, and various other administrative chores, that are currently required. If operators can ultimately drive enough customers toward these services, there should be cost-saving benefits. (See Colt: Automation's 'Silent Killer' Is Poor Quality Data.)

During the London demo, upgrades were carried out from the perspective of a Colt customer as well as a Verizon one. This showed that each operator could handle an off-net upgrade on the other's production network. But a bandwidth-on-demand offering would only partly address customers' emerging needs.

"Being able to upgrade bandwidth might not be that important," says Konings. "We're seeing customers requesting changes almost on a daily basis."

Eventually, that means, operators will look at using cross-carrier automation to support other types of service. "This is not just about making requests in a portal but also ensuring that apps like Skype and other services can talk more directly with service provider systems," says Bar-Lev. "There is a lot of work to do." This week's demo is a encouraging start.