PARIS -- Orange Hello 2019 -- The CEOs of Orange and Deutsche Telekom have issued a rallying cry for Europe's underperforming technology sector with the launch in Paris of a new smart speaker that uses artificial intelligence (AI) developed almost entirely in-house.

While European operators such as Telefónica have already released voice-activated digital assistants, the move by Orange (NYSE: FTE) and Deutsche Telekom AG (NYSE: DT), under a 50:50 joint venture, appears to mark the first effort by European telcos to build AI technology without the support of the US tech giants, said David Watkins, the director of connected home devices for the Strategy Analytics Inc. market-research firm.

The Telefónica Aura technology, launched in six European countries during this year's Mobile World Congress at the beginning of the year, relies heavily on the AI capabilities of US software giant Microsoft Corp. (Nasdaq: MSFT), for example. And Orange turned to the IBM Corp. (NYSE: IBM) Watson technology when developing an AI assistant for its Orange Bank service. (See Telefónica Takes Aura AI Tool Into 6 Markets and Orange Plans Bank Raid With AI, Digital Weapons.)

The AI tools unveiled at Orange's annual Hello show in Paris earlier today are the fruit of an 18-month collaboration between Deutsche Telekom and Orange that has involved 150 experts from Germany and France. "They have been working to develop hardware and software components for AI," said Timotheus Höttges, Deutsche Telekom's CEO, in Paris this morning. "We've pooled resources on language processing and IT orchestration and AI skills to share knowledge and design one unique German-French product." 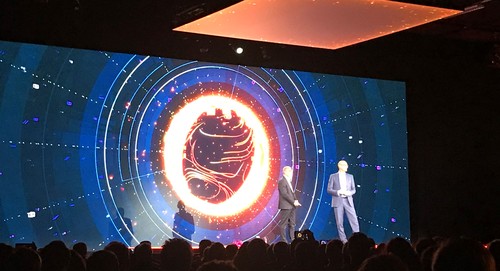 Orange CEO Stephane Richard said his company would launch a smart speaker costing 49 ($56) next spring, allowing customers to request information, play music and control various household services. Using the same underlying AI technology, Deutsche Telekom will market its own smart speaker under its Magenta brand, although details of pricing and availability were not announced at today's event.

While the smart speaker is entirely new, Orange unveiled a digital assistant under the Djingo brand at last year's Hello event, announcing its partnership with Deutsche Telekom at the same time. Until now, customers have been able to make use of Djingo through a smartphone app. (See Orange Adds Voice to Growing Chorus of Digital Assistants.)

The entry into the busy market for smart speakers will clearly put Orange and Deutsche Telekom in even closer competition with US tech giants such as Google (Nasdaq: GOOG) and Amazon.com Inc. (Nasdaq: AMZN), which already provide speakers based on their own AI systems.

Höttges and Richard, however, are hoping they can tap into growing concerns about data protection and the dominance of technology giants based in the US and China. "Today, only 4% of the world's data is stored in Europe on European companies' clouds," said Höttges. "Meanwhile, the global tech guys have access to all this data, and the more they get the better their services get. We have to do something about that." (See Facebook: The Sick Man of Silicon Valley and How the West Can Hurt Huawei.)

Deutsche Telekom and Orange are promising that customers' data will be stored and secured on European soil in full compliance with the recently introduced General Protection Data Regulation (GDPR). "With GDPR, Europe has moved to protect the data of citizens in the right way," said Höttges.

He also urged Europe to assert itself in areas including Internet security, quantum computing, photonics, nanotechnology, connected cities and 5G infrastructure. "These are key enabling technologies that will guarantee wealth and prosperity in future."

Richard echoed those remarks, arguing that Europe has the requisite assets to become a "digital driving force" in the years ahead. "We have the best engineers and schools in the world, an outstanding industrial base and a flourishing environment of innovative start-ups," he said, citing the UK's DeepMind and Luxembourg's Skype as high-profile examples of Europe's technology strength. (See Robot Wars: Telecom's Looming AI Tussle.)

Of course, those companies are today subsidiaries of Google and Microsoft Corp. (Nasdaq: MSFT) respectively, but the US tech giants have so far had zero involvement in the AI work being carried out by Deutsche Telekom and Orange, according to an Orange spokesperson.

Instead, the operators have drawn on the expertise of a range of smaller AI companies. Those include Nuance, a specialist in language processing, and SoundHound, which is also working on voice-enabled systems.

A French software partner called Gogowego, meanwhile, is developing tools for connecting bots. This should allow a retailer using IBM Watson to link its systems to Djingo, said Orange's spokesperson.

Despite the anxiety about US technology dominance, Orange's smart speaker will provide support for Amazon's Alexa AI system, said Richard, and Orange is trying to ensure that Amazon's hardware will support Djingo. "We are working with Amazon to embed AIs into respective speakers," said Orange's CEO. "We want to handle all needs."

Orange has indicated that other hardware, including TV remote controls, will be able to support Djingo after a simple software upgrade.

The Wild West of smart home assistants
From the first quarter of next year, it is also rolling out a new "Connected Home" service that will allow subscribers to control and monitor various household fixtures and appliances. According to Richard, anyone with Orange's latest-generation Livebox home gateway will be able to use the service after performing a software upgrade. "From the first quarter, you will be able to connect objects to Livebox using an app on the smartphone or TV screen," he said. "When we flick the switch around 3 million homes will be able to step into this IoT universe." (See Orange to Bring Virtual LiveBox to France in 2018.)

Richard promised the service would be available "at no extra cost" and be compatible with products from companies such as Philips, Bosch and Netatmo. On top of this, customers will be able to pay for a forthcoming "Protected Home" security service that Orange is currently developing with Groupama, a French insurance giant whose banking subsidiary Orange acquired in 2016.

Richard described the security service as Orange's "second venture as a multi-service operator," following its launch of Orange Bank last year. "We will send a crew to your home to set up the alarm system and then you can manage it with an app remotely," he said.

Linkage to this range of connected home services should boost the appeal of the Djingo technology, giving it a potential advantage over Alexa and Google Assistant for existing Orange customers.

Nevertheless, tech, media and telco analyst Paolo Pescatore thinks operators will face a tough fight in this market. "The web giants hold a significant lead in this area," he said. "However, telcos still hold the relationship through the router, which will be paramount."

When it comes to data protection, one potential concern is whether Amazon would have access to customer information in cases where both Alexa and Djingo are used on the same speaker. Answering questions from reporters and analysts, Bertrand Rojat, the deputy vice president of Orange's Technocentre R&D facility, said Amazon would be able to access data only when a customer calls on Alexa. But critics who think smart speakers are constantly relaying information to web providers may be skeptical.

Moreover, while free availability should bolster Djingo's appeal, it could also limit the sales opportunity, at least in the short term. Amazon clearly sees Alexa as another channel for ecommerce sales, but operators like Deutsche Telekom and Orange are evidently not in the same kind of retail position.

CCS Insight principal analyst Kester Mann thinks Djingo could help Orange to sell a broader range of connectivity and entertainment services, including its TV offers. The big question, he says, is whether customers will be sufficiently concerned about data privacy to pick it over Alexa or Google Assistant.