And the 5G Winners Are the Telcos  LR Poll

Asking any long-in-the-tooth financial analyst if 5G will be a good thing for telcos is likely to elicit a groan.

As they know only too well from the 4G experience, next-generation network technologies rarely seem to pay off for the investors. When it came to 4G, operators spent billions on rollouts without seeing any corresponding boost in service revenues. Cash flow was squeezed. (See EE: New Tech Is Mobile Revenue Savior.)

It was great for the app economy, though. Internet companies and software developers surfed the investment wave churned up by telcos and got rich. Given the shortcomings of 3G, the likes of Uber and WhatsApp, used daily by smartphone addicts everywhere, would probably not have thrived without 4G.

None of this retrospective wisdom would have stopped telcos from building 4G networks, of course. With voice in decline, 4G has been the conduit for revenue-generating data traffic, even if that hasn't offset a decline in sales of older services. Sitting out 4G would have meant losing business to 4G rivals. And 4G was simply more up-to-date and efficient than older gear. As equipment vendors wind down their support for 3G technology, the upgrade seems even more important. (See Let's Talk About 5G Efficiency, Not Wacky Services.)

Such mundane considerations are now spurring operators to invest in 5G technology. Yet there are signs of industry optimism that 5G will not repeat the same bleak pattern as 4G. When Light Reading's audience was asked who stands to profit most from the launch of commercial 5G networks, 28% of 300 respondents picked network service providers, putting them ahead of any of the other five options.

Who Stands to Profit Most From the Launch of Commercial 5G Networks? 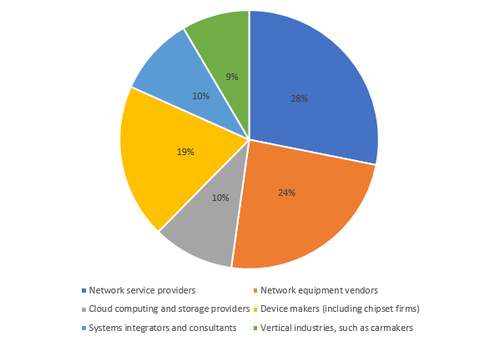 Why might 5G be different? Rather like 4G, the first versions of 5G technology will power higher-speed connections for smartphone users. Given consumers' reluctance to pay extra for a faster service, it is no wonder telcos such as Three UK are skeptical this will buoy service revenues. A reduction in network costs, thanks to 5G's spectral efficiency, might fatten profit margins, but probably not by much. None of which sounds very encouraging. (See Three UK to Go Big on 5G for Home Broadband.)

But as 5G grows up, it could, in the next few years, do a lot more. Think of connectivity in facilities that need more security and reliability than WiFi can deliver. Or a service that replaces satellite systems in live broadcasting. Even more futuristic examples include connected, self-driving cars and remotely controled robotic surgeons. (See 5G Still More Like Rocket Fuel Than a Mission to Mars and BT Hopes to Score With 5G Broadcasting Push.)

Not everyone is convinced and telcos themselves have acknowledged there are still too few viable examples of non-traditional mobile services. While the telecom industry has busied itself building a standard, it seems to have forgotten to ask other industries how 5G might be used. Producing a list of possibilities, in partnership with non-telco organizations, must be one of the biggest priorities for service providers this year. (See 5G Stuck in Slow Lane Beyond Consumer Biz.)

Coming from the telecom industry, the view that telcos will profit from 5G more than cloud computing companies or other industries may be wishful thinking (network equipment vendors ranked as the next most popular choice, while device makers came third). It is also worth noting there was not a clear majority of respondents in favor of telcos: Opinion is very much divided on the issue.

But 5G does, at least, hold out the possibility of sales growth. And it has been a long time since that has happened in any meaningful wayin telecom.