LONDON -- Software Defined Operations & the Autonomous Network -- In Minority Report, a 2002 movie starring Tom Cruise, a "pre-crime" police unit uses data analytics to predict murders and then arrest the apparent offenders before any deaths have occurred.

While the scenario is fictional (for now), the same kind of technology is already in use at one of the world's biggest telecom operators. Spain's Telefónica, which operates across markets in Europe and Latin America, has been using increasingly sophisticated data analytics to predict business problems and take steps to avoid them. As the technology becomes more advanced, the success rate is improving.

Juan Manuel Caro, Telefónica's global director of operations and customer experience, is now experimenting with more than 300 potential "use cases" for the technology, and some go way beyond the mundane application of analytics to basic network monitoring. 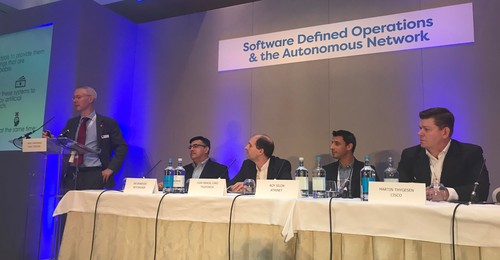 In one of the most attention-grabbing examples, Telefónica has been collating information about weather patterns and using this to see where hurricane activity might pose a threat to its undersea cables.

While Tom Cruise could arrest criminals in their tracks in Minority Report, Telefónica has not yet figured out a way of stopping hurricanes. But its own version of a pre-crime unit could make a big difference to costs, according to Caro.

"You have to rent capacity from a third party as back-up and if you do this after a cut you have to pay a lot because they can charge whatever," he said during a Light Reading conference in London this week, Software Defined Operations & the Autonomous Network. "If you do it in advance it is much cheaper."

During trials in Argentina, the operator has used what it calls "signature recognition" technology in bus cameras to see where roadworks might pose a similar risk to its underground lines. Caro says it has been able to predict 56% of cuts where the technology is used, and that Telefónica is now looking to establish a more formal agreement with bus companies for the installation of cameras. "Almost anything is possible with the right data," says Caro. "You just have to think outside the box."

Some of the analytics technology has already made its way into a commercial setting. Telxius, the Spanish operator's infrastructure business, has taken advantage of the hurricane-monitoring tools, for instance. More generally, Telefónica's ability to predict outages in network equipment has so far improved network availability by 0.2 percentage points across the footprint. Algorithms have also been used to prioritize investment activity and match the appropriate spare parts with specific equipment problems. Such capabilities could help Telefónica and other service providers to slash capital expenditure in future.

James Crawshaw, a senior analyst with Heavy Reading, is impressed with the way Telefónica has gone about taking advantage of data analytics. "One of the more interesting things for me about Telefónica's approach is their use of crowd sourcing to leverage the expertise of independent data scientists, academics and hobbyists, in addition to their internal resources," he says. "This is like the marketplace concept of the Linux Foundation's deep learning project, Acumos, where third parties can publish machine learning algorithms and service providers -- as well as companies from other industries -- can 'try before they buy' on their own datasets."

Indeed, collaboration may be critical in this area. "No service provider can achieve the economies of scale of global companies like Google and Facebook, so they need to find ways to collaborate both with each other and the wider community of data scientists and AI [artificial intelligence] experts," says Crawshaw.

One of the main difficulties for operators right now is gathering, storing and cleaning the data they need for predictive maintenance and other business insights. "Data is spread across legacy systems and putting it in a data lake is not easy," says Caro. "Data quality is not a strength of service providers and you have to clean it, standardize it and normalize the data model. It's complicated." That process could also drive up costs before operators have seen any real business benefits.

Martin Thygesen, a project manager with Cisco Systems Inc. (Nasdaq: CSCO), says dumping all the data available to an operator in a single repository might not even be the right answer. "Data has different legacies and retention ratios and trying to build a one-size-fits-all lake is a challenge commercially," he says. "In the service provider environment, it might seem like a good idea to throw all the problems in one area, but the relevance of data depends on the system it is scaled for and how you interact with it."

Telefónica is certainly not the only service exploring opportunities in this area. France's Orange (NYSE: FTE) has also been using data and network analytics to predict demand patterns and anomalies in dense urban areas. During a conference earlier this year, Imen Grida Ben Yahia, a research expert with Orange Labs, said the operator had used real network data from Manhattan to see if it could predict large-scale events that might have a drastic effect on traffic demand. (See Orange Hails AI Progress in 5G With IBM, Nokia.)

"I think it shows we can do lots of things," she said when commenting on Telefónica's bus trials in Argentina. "It depends what data you have, but you can build many use cases."