AUSTIN  Big 5G Event  AT&T's Brian Daly sounds to me like a man who just spent thousands of dollars on fortifying his property only to find the approaching hurricane is even more violent than he expected.

So frazzled he seems by the onslaught of gigabytes that he temporarily mixes up his numbers. Some 525 petabytes of data crash through AT&T's global network every quarter, he tells the Big 5G Event in Austin this week, before realizing that deluge is a daily occurrence.**

"Our network has had a 934,161% increase in data traffic since 2007," said the assistant vice president of standards and industry alliances for the US telco giant.

"We don't anticipate that will slow down. When I look to the next generation, I have to consider how to support more and more data." It is the "top consideration" for 6G, he said.

This is exactly what his big equipment suppliers want to hear as they try to justify another monstrous investment splurge around the 2030 timeframe.

If operators believe  rightly or wrongly  that a new generation of mobile technology is needed to withstand this data storm, the hard work of marketing 6G disappears. 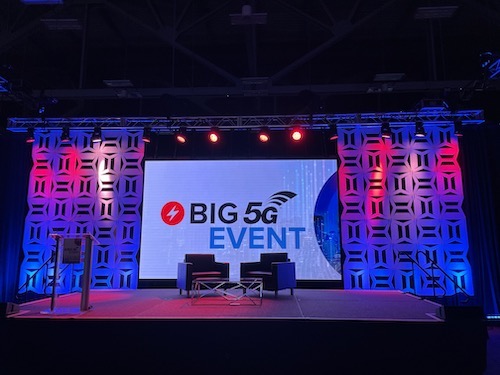 Many governments will also be delighted. The industry's once-a-decade upgrade cycle is not carved in stone like a commandment, and it means conceiving technology ideas years before anyone really knows what the market demands will be.

But to your average destitute finance minister, it is a future auction payday he or she can jot down on the wall planner, a lucrative Go square on the Monopoly board.

The US government pocketed $80 billion by licensing airwaves for 5G just over a year ago, and it didn't even bother to check if the services would interfere with aircraft altimeters (they do, said the aviation industry, spotting an opportunity to make someone else pay for equipment upgrades).

Technology giants watch from outside the game, trying to conceal their smiles. On February 27, Dan Rabinovitsj, the vice president of connectivity for Facebook (sorry, Meta), complained that his avatars in some dystopian, Ready Player One future won't render properly on today's technology.

His blog on the subject includes a list of requirements  symmetrical bandwidth, lower latency, edge  that connectivity companies are obviously supposed to read, plan for and ultimately invest in (it was published during this year's Mobile World Congress) so that Facebook, Meta or its successor can profit.

The band has passed out

Everyone's happy except the telcos and their long-suffering shareholders. Daly's employer makes less now than it did in 2018, before 5G was launched (AT&T's revenues dropped from $170.8 billion then to $168.9 billion in 2021).

The only Americans who don't own smartphones are babies, survivalists, technophobes and other people who are never going to buy one. Mobile data has become an all-you-can-eat buffet. Gluttons fill their plates without having to spend more.

Investments in technology and bad bets on content have pushed liabilities up to ear-popping levels. AT&T's long-term debt has shot from $66 billion ten years ago to nearly $153 billion.

Trade shows and conferences seem largely oblivious. At the Big 5G Event, there was the usual echo-chamber talk about extended reality, 5G-connected farms, private wireless and other applications that neither generate nor will generate much extra dosh for the likes of AT&T.

It is called the connectivity industry, but the disconnect is stark  regulars on the events circuit party hard, excitable about the next generation of mobile, and yet the music has long stopped, and the band has passed out.

Outside these venues, company bosses are in a panic about having to pay for late-stage 5G improvements and 6G rollout when their business models have atrophied and cluelessness is endemic.

They have already sold assets, spun off infrastructure (and leased it back) and started sharing networks. The next move, they hope, is to make the Internet companies fund network deployment.

The idea is about as ridiculous as forcing JK Rowling to pay for the bookstores that sell her novels, but it has gained ground in Europe and even appears to have a sympathetic ear among regulators.

After years of drawing up unfathomable rules to enforce net neutrality  the principle that operators should not be able to favor some Internet services over others (or extract payment from their providers)  authorities look set to break them.

As noted in a recent Financial Times story, a European Commission report on digital rights recently said that "all market players benefiting from digital transformation [should] make a fair and proportionate contribution to the costs of public goods, services and infrastructures."

For the Internet companies, investing would presumably mean taking a stake in networks? That is typically what happens in a free-market economy when funds are contributed, but the issue has been dodged in this case.

Europe can always do what it does best, of course, imposing fines or heavy taxes on Internet companies that won't play ball. A harbinger has come from non-EU Switzerland, where the government  with public backing  is now forcing Netflix to subsidize the local movie-making industry. Stranger things indeed.

Meanwhile, 5G stakeholders in Texas this week seem to have overlooked something important  that a global 6G standard has all the long-term survival chances of an ice cream under the Austin sun.

Despite the apparent sickliness of globalization, Amitava Ghosh, the head of the radio interface group for Nokia Bell Labs, laughed off a Big 5G Event audience suggestion that standards could fragment, as confident as someone predicting Hillary Clinton would never lose to Donald Trump.

** Editor's note: Saying someone seems frazzled or strained by the sheer amount of data hitting their network is not a professional or personal attack nor is it a condemnation of the panelist's ability to be an effective public speaker. Italics were added to make the point a little clearer for our readers. Please direct complaints to [email protected]