Even if Verizon spends an astounding $44 billion to purchase C-band spectrum, it still won't have anywhere near the amount of midband spectrum that T-Mobile will command, according to a new report by the financial analysts at Evercore.

The analysts expect T-Mobile to own twice the amount of midband spectrum than Verizon on a per-subscriber basis, even after the C-band results are tallied. Even if Verizon bought all of the C-band spectrum up for grabs in the FCC's auction  which would carry a $95 billion price tag in bidding and clearing costs  it would only pass T-Mobiles midband spectrum holdings by 16%.

The findings help highlight the value of the vast trove of midband spectrum that T-Mobile acquired via its $26 billion purchase of Sprint, which closed in April 2020. Already T-Mobile has applied the "ultra capacity" brand to the 5G network it's building in the 2.5GHz midband spectrum it acquired from Sprint. The operator said the network is supporting average speeds of around 300Mbit/s and will cover 200 million Americans by the end of this year.

Verizon, according to the Evercore analysts, has little chance of catching up to T-Mobile's spectrum lead.

"T-Mobiles strong spectrum position means the company had the least need to bid in the [C-band] auction. With that said, one can never be too rich, too thin, or have too much spectrum, so we would not be surprised to see T-Mobile had participated actively," they wrote.

The FCC's C-band auction ended last month at a total of $81 billion in bids. The agency is widely expected to announce the winners of the auction in early March. Perhaps not surprisingly, Verizon, AT&T and T-Mobile have all scheduled major investor meetings in the weeks after the FCC is scheduled to announce C-band auction winners, presumably to disclose how they expect to pay for their spectrum licenses and how they might make money from that spectrum investment.

In their newest report on the C-band, the Evercore analysts outlined their specific predictions for each carrier's C-band spending. "For the purposes of this analysis, we assume that the Phase I spectrum, which comprises 100MHz in 46 of the top 50 metro markets, and is scheduled to be available in December 2021, is split 70/30 between Verizon and AT&T. For the remainder of the spectrum (a further 180MHz in those 46 markets, and 280MHz in the remainder of the country), our spending forecasts imply 26% to AT&T, 38% to Verizon, and 21% to T-Mobile," they wrote. 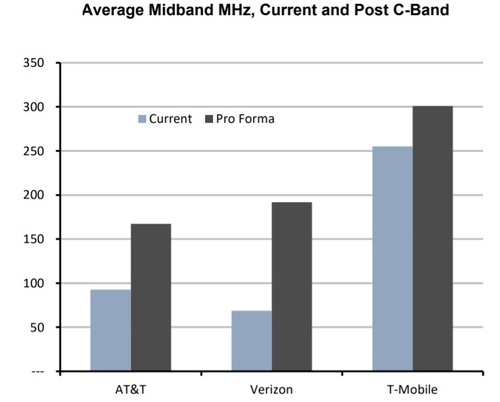 Evercore offers a prediction on how much midband spectrum Verizon, AT&T and T-Mobile might own after the C-band auction results are tallied. Click here for a larger version of this image.
(Source: Evercore)

It's worth pointing out that Evercore's analysis only focuses on operators' midband spectrum assets and not their lowband or highband spectrum holdings. 5G networks of the future are expected to run across lowband, midband and highband spectrum. However, many have argued that midband spectrum like the C-band will play an outsized role in the development of 5G networks because signals in such spectrum can cover wide geographic areas while also supporting speedy connections, partly because advanced technologies like Massive MIMO are considered ideal for midband spectrum operations.

The reason the FCC's C-band auction generated record-breaking bids is due to a variety of factors. First, the agency isn't expected to release so much spectrum anytime in the near future. Further, an operator's 5G capabilities are often directly tied to the amount of spectrum it owns. The more spectrum an operator can apply to its network, the more capacity it has and the more customers it can connect.

T-Mobile's healthy spectrum holdings, coupled with its aggressive business tactics, have led a number of financial analysts to raise their expectations for the company.

"All in all, we believe the significant free cash flow generation as the new T-Mobile exits the [Sprint] integration period should be dramatic," wrote the financial analysts at Raymond James in a recent note to investors. The analysts reiterated their "outperform" rating on T-Mobile's stock and raised their share target price from $140 to $142.