As the US gears up for what could be the most subdued July 4 celebrations in living memory, the goal of an Independence Day from Chinese technology remains firmly on the government agenda.

The campaign to expunge any trace of Chinese technology from US telecom networks motored on this week as authorities added Huawei and ZTE to their latest naughty list. But removing these "bad actors" will be much easier than ridding the US entirely of their secret sauce.

Like it or not, the 5G cookbook that Ericsson, Nokia and Samsung are using in North America was written with Chinese authors and published by the 3GPP, a global standards organization. Every 5G network built for AT&T, T-Mobile US, Verizon or any other US service provider is based partly on Chinese expertise.

To what extent is unclear. Some analysts think Huawei's 5G knowhow exceeds that of any other company. Even if it does not, the Chinese vendor is undeniably one of the main contributors of 5G patents. 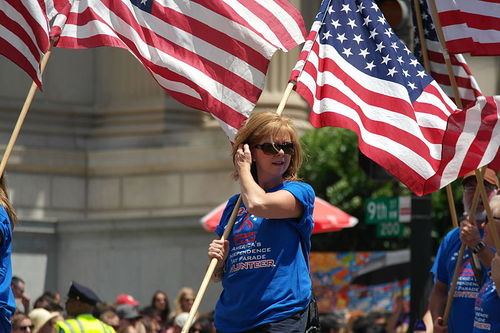 If only it weren't for those damned Chinese patents.

This is an inconvenient truth for US hawks. For one thing, it entitles China to royalties on the sale of devices in the US market, fattening wallets at Huawei and ZTE.

More important, it means China is effectively in control of a big part of the 5G standard. The full implications of that might become apparent as relations between China and the US continue to deteriorate.

The US cannot simply boycott the 3GPP, however. Doing that would risk further aggrandizement of the Chinese.

Accordingly, it recently tweaked its anti-China trade sanctions to ensure that American firms can work alongside Chinese ones on the development of 5G and other standards.

"The US will not cede leadership in global innovation," said Wilbur Ross, the US secretary of commerce, in explaining the move.

Starks raving mad?
To reclaim the tech initiative, some US officials have backed open RAN, a system they apparently regard as a 3GPP alternative. Designating Huawei and ZTE as "national security threats," the Federal Communications Commission (FCC) this week championed open RAN as a potential answer.

Even ignoring open RAN's immaturity, these remarks seem to overlook two major barriers to an Independence Day from Chinese technology: the involvement of Chinese companies in open RAN specifications; and the fact that open RAN is an adjunct to the 3GPP, and not a standalone system.

The former should be obvious to anyone who has tracked open RAN's short history.

Announced to the wider world at Mobile World Congress in 2018, the O-RAN Alliance, the name of the specifications group, was formed from the merger of two existing operator-led associations.

One, the X-RAN Forum, was mainly American and featured AT&T as its biggest member. The other, the C-RAN Alliance, was Chinese and backed heavily by China Mobile, the country's largest telco.

While such a US-China collaboration would surely be unthinkable now, the tie-up has embedded Chinese knowhow in what the US government today wields as a weapon against China.

The contradiction is not lost on Peter Claydon, the UK-based president of Picocom, a Chinese startup and O-RAN Alliance member.

"Part of the irony of O-RAN now is that a lot of it is stuff that came from China Mobile in the first place," he says.

Just like the 3GPP, the O-RAN Alliance uses a system of fair, reasonable and non-discriminatory (FRAND) licensing for intellectual property, says John Baker, the senior vice president of business development for Mavenir, an open RAN software company. That essentially allows contributors to charge for use of their patents under an agreed set of principles.

But figuring out the O-RAN ownership stakes is even harder than it is for 3GPP technologies.

One of the most important O-RAN technologies is a new interface between radios and the baseband (which processes signals). This "fronthaul" would replace an older industry specification called CPRI (for common public radio interface), which forces an operator to buy radios and baseband products from the same kit maker.

The O-RAN alternative, which allows different radio and baseband suppliers to be used, was developed mainly by AT&T, Cisco, Mavenir, Nokia, Samsung and Verizon, says Baker. None of those players is Chinese.

It is inconceivable the C-RAN Alliance did not bring something to the table, however.

The Chinese operators, all of which are now O-RAN Alliance members, have been "very much behind O-RAN," says Claydon.

"Fundamentally, O-RAN is something they want to deploy," he says, noting that an O-RAN "plugfest" is scheduled for September in Beijing.

Most Chinese vendors in the O-RAN Alliance are relatively small and unknown, like Picocom. But ZTE is an obvious exception. Sources at the company insist it has been very active as a contributor.

Hitched to the 3GPP
Even if the US did have the upper hand in O-RAN, it simply cannot avoid the 3GPP or existing technologies. All O-RAN essentially does is plug a few gaps where mobile interfaces were either incomplete or unavailable.

When it came to fronthaul, it took CPRI as a starting point and filled in the missing parameters that made this impossible to implement as an open standard.

"O-RAN is still reliant on the 3GPP process and the overall end-to-end specifications to make sure that everything fits and works," says Baker.

CPRI alone counts Huawei as one of its main four patent owners, the others being Ericsson, Nokia and Japan's NEC, a resurgent force in the equipment market.

In the 3GPP, China might be less powerful than it likes to appear, but its presence has indisputably grown in the last few years as operators have shifted from 3G to 4G and now to 5G technology.

This dependency on the 3GPP creates another potential issue for open RAN companies  the risk that an open RAN opponent with mobile technology patents tries using them to block an open RAN deal.

Baker reckons this is highly unlikely. Major patent owners, including Ericsson, NEC and Nokia, are all now part of the O-RAN Alliance, he points out. Such tactics would also probably meet with a backlash from operators.

Regardless, the US government seems oblivious to the "irony" that Claydon highlights. "Even if the US was to go off and develop from the ground up their own products, they would still be using Chinese patents," he says.

A charitable explanation is that today's priority is to remove Chinese equipment and cultivate US alternatives to Chinese vendors.

A harsher one is that officials really have missed the bigger picture.

"I don't think  from people in the US and companies I've been talking to  that US politicians really understand things at that level," says Claydon.