The 5G debacle in the C-band isn't over yet

It's been a remarkable week in 5G. Dozens of international flights were canceled or modified due to airline industry concerns that 5G operations in C-band spectrum could interfere with aircraft radio altimeters.

However, thanks to last-minute concessions forced onto Verizon and AT&T, fears that 5G would literally crash airplanes have now been averted. As a result, airlines ranging from Emirates to Japan Airlines have resumed flights into the US.

"I don't think you're going to see any material disruption going forward" due to 5G, American Airlines CEO Doug Parker said Thursday during his company's quarterly conference call, according to a CNBC reporter.

But that doesn't mean the issue has been resolved. A complete fix could take years, and it could cost millions  or even billions  of dollars.

Will the calling party pay?

According to a lengthy article in The New York Times, the Federal Aviation Administration (FAA) has so far cleared 62% of the US commercial fleet to perform low-visibility landings  where radio altimeters are critical  at airports near 5G operations in the C-band.

However, there are still presumably hundreds of other aircraft that have not yet been cleared to use their altimeters in such areas. And there may be a reason for that. The NYT cited an engineer from altimeter-maker Honeywell Aerospace who said the company had found a range of errors  from altimeters "getting noisy" to providing no reading at all  in the company's 5G tests.

In such cases of interference, "the most likely solution is [to] swap out the altimeters," Peter Lemme told the paper. Lemme is a former Boeing engineer who spent 16 years at the company designing safety systems that relied on altimeters.

Who might pay for that potentially expensive retrofitting? Well, that's unclear at best.

"There are only three sources of such funds for the aviation industry," former FCC chief Tom Wheeler wrote in November. "The government could pay out of the almost $82 billion generated by the sale of licenses to use the C-band; that would probably require an act of Congress. The wireless industry could pay an additional tariff on top of the billions already spent for spectrum the government said would be ready for use on December 5. The aviation industry, having known for some time of the new 5G allocation, could pay to fix the offending altimeters."

There is precedence for payments from 5G providers. Verizon and AT&T have already agreed to pay Intelsat $4.87 billion and SES $3.97 billion for moving some of their satellite operations out of the C-band quickly.

Harold Feld, of public-interest group Public Knowledge, told the NYT that any solution to the altimeter-replacement question will have to be negotiated between the airlines and the FAA on one side and wireless companies and the FCC on the other. "But the two camps view the problem so differently that reaching agreement could be difficult," the publication dryly noted.

Now, if that's not worrisome enough, here's where things get really crazy: According to Breaking Defense, a trade publication that covers the US military, the Pentagon does not even know yet whether it will need to update the altimeters in its own aircraft. And the US Department of Defense is the largest aircraft fleet owner in the world.

The Pentagon's US Transportation Command told Breaking Defense that it is "aware of and is closely monitoring, via the FAA, the 5G rollout and its impact to aviation." But interference studies are ongoing.

Ultimately the Biden administration is responsible for this debacle, regardless of the fact that it traces its origins into the Trump administration.

And, according to Politico, the president knows this. The publication reported that the White House "has realized the dysfunction and been taking the right steps," according to an unnamed wireless industry executive. "They get it now. They get the problem. And you see the result in a clear and definitive resolution," the executive told Politico.

Regardless, the PR disaster surrounding the launch of 5G in C-band this week  complete with breathless reporting on dozens of canceled or altered flights  only helps to highlight the ongoing dysfunction at practically all levels of the US government.

And those involved in the situation are fully aware of that.

"It wasn't our finest hour as a country," said American Airlines' Parker.

At the heart of the matter is the NTIA, the government agency charged with managing spectrum negotiations between government and commercial users. The agency has been without an official leader for years. Biden's pick to head up the agency  Alan Davidson  finally won Senate confirmation just eight days ago.

According to the financial analysts at New Street Research, the ongoing political debate over the C-band could ultimately impact a wide range of other areas of spectrum management.

"There will be long run residue in spectrum policy making" due to the C-band debate, the analysts wrote in a note to investors this week. "For example, it probably increases the value of 12GHz, as there is no federal government user there and the FCC leadership may want to accelerate a positive spectrum proceeding to change the spectrum discussion ... It probably will lengthen the internal debate over the next big midband spectrum allocation, the 3.1-3.45GHz band, as the parties will all go to lengths to make sure what happened with the C-band does not happen again."

Ultimately, there's only one clear winner that has emerged from the detritus of the C-band debacle. And T-Mobile knows it.

"While the government works to address 5G coexistence in the C-band with aviation, you can keep getting the most out of that 5G smartphone on T-Mobile," T-Mobile's networking chief Neville Ray wrote on the company's website Thursday.

T-Mobile's midband 5G network runs in 2.5GHz spectrum, which is nowhere near the C-band or radio altimeters and, therefore, cannot cause any interference. T-Mobile does own some C-band spectrum licenses, but they won't become available for commercial operations until 2023.

Network-monitoring company Ookla this week offered a very clear look at exactly why T-Mobile has reason to boast  and why the C-band debate is so important to AT&T and Verizon. 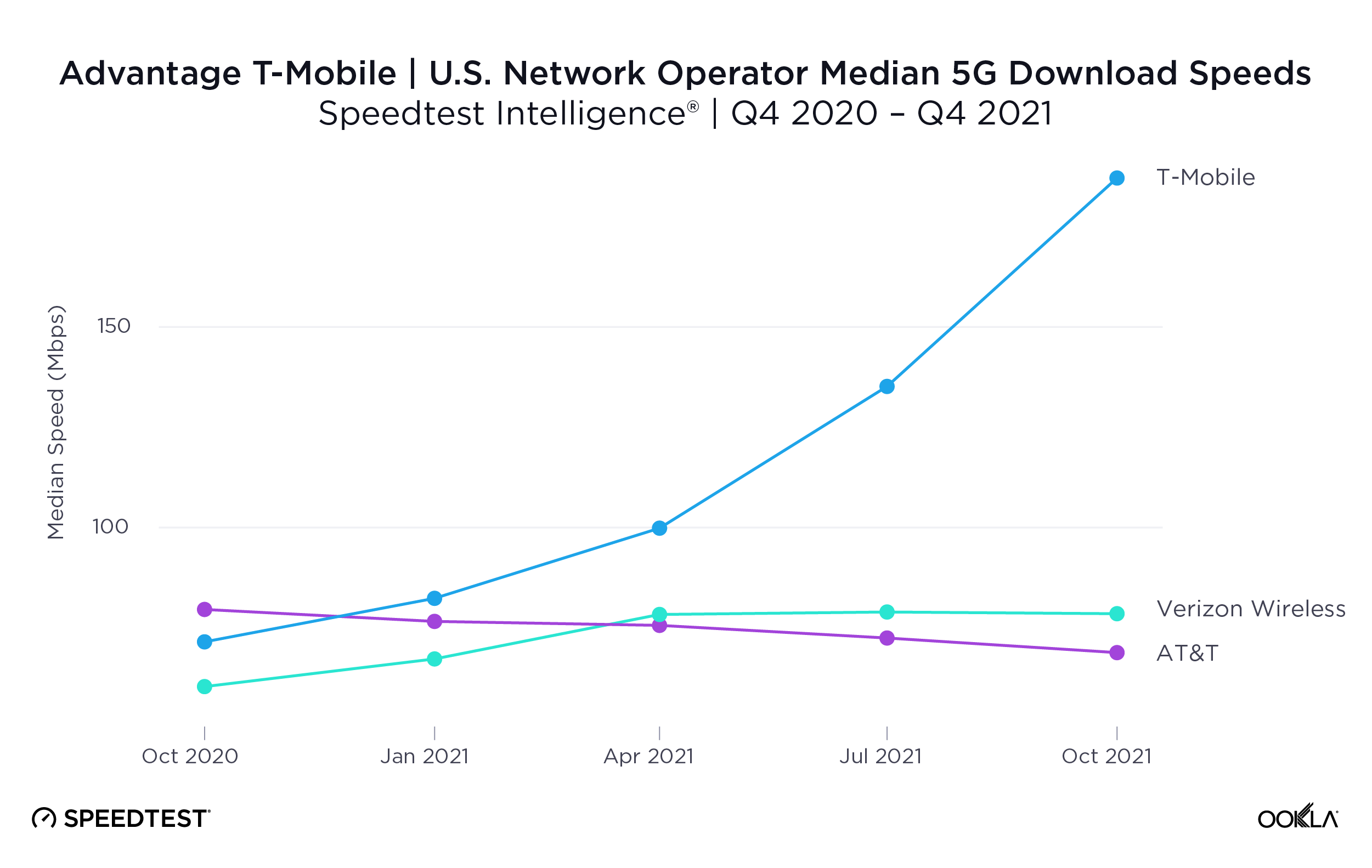 Ookla's data shows how T-Mobile's ongoing midband 2.5GHz network deployment has dramatically increased the speeds it can offer on 5G.
Click here for a larger version of this image.
(Source: Ookla)

"T-Mobile continues to extend its lead on 5G performance, which has helped the self-styled 'uncarrier' attract more postpaid net additions than its key rivals combined," the company wrote on its website. "This is why both Verizon & AT&T had little choice but to placate the FAA."

The firm cited data from France where operators launched 5G in spectrum similar to the C-band in early 2021. Thanks to that launch, French operators managed to double their download speeds, from around 100 Mbit/s to 200 Mbit/s.

"They set up a testing plan, performed tests and subsequently developed mitigation at airports. They were able to keep the 5G rollout on schedule. In France, these government agencies realize that they must work together for the good of the people," the firm explained. "Compared to the US, France has used reason, science and evidence to test the proposition that 5G transmissions interfere with altimeters."

Finally, it's important to point out that, ultimately, the analysts at New Street Research don't believe AT&T or Verizon will be "materially" affected by the ongoing troubles in the C-band. "The important point for investors is that the marketing competition for 5G services between the three major players can begin in earnest and the dispute did not give T-Mobile an additional edge in that competition," they wrote this week.