AUSTIN  Big 5G Event  John Legere, the former boss of T-Mobile US, cheekily used Dumb and Dumber when talking about AT&T and Verizon, his mobile rivals. Slow and Slower might be more appropriate  if Neville Ray's assessment is to be trusted. "We are on a much bigger footprint and much deeper set of spectrum assets and that is why we can talk about 5G leadership," said T-Mobile's chief technology officer at this morning's Big 5G Event in Austin.

After its controversial merger with Sprint, Ray's employer now lays claim to a huge swath of spectrum  some 357MHz in total, according to a recent filing with the US Securities and Exchange Commission  spanning the 600MHz to C-band ranges. On average, its mid-band holdings dedicated to 5G alone amount to 100MHz, the same quantity that AT&T and Verizon hold together. If the 5G wars are all about speed and capacity, spectrum is the ammunition, and T-Mobile evidently holds a massive supply.

It will use that spectrum this year to extend 5G mid-band coverage to about 260 million people, up from 225 million today, Ray revealed at today's Austin event. While the population increase is only 16%, the nature of those coverage zones means tripling the geographical footprint of the mid-band network. Next year, when T-Mobile is targeting mid-band coverage of 300 million people, that geographical footprint will then double. 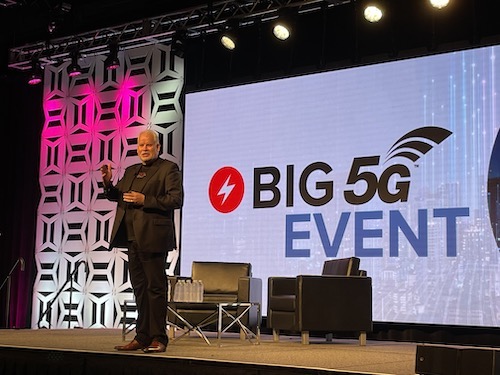 The ambitious deployment partly explains why T-Mobile is projecting peak capital expenditure this year. Figures published by Deutsche Telekom, T-Mobile's German parent, show that spending after payments for spectrum hit about $10.9 billion in 2021, up from $9.8 billion the year before, at today's exchange rates. This year, the expectation is that capex will rise to between $13.2 billion and $13.5 billion.

But even if sales remain flat between 2021 and 2022, that would be only 16% of revenues, a relatively low rate of capital intensity. For instance, BT, the UK telecom incumbent, is now investing about a quarter of revenues in capex as it rolls out both fiber and 5G networks. T-Mobile's revenues, moreover, increased by 17% last year, to $80.1 billion, as it continued to hoover up 5G business.

Sprint sped us up

The speed of the 5G deployment vindicates T-Mobile's arguments about the benefits of a merger with Sprint, Ray believes. The deal, indeed, was sold to regulators on the premise that a combined company would have the resources to build 5G faster. Including its low-band airwaves, T-Mobile puts total 5G coverage today at about 315 million people, or 95% of the population. Geographically, it means that 1.8 million square miles of US territory are served by 5G signals, according to Ray.

Rivals are clearly lagging when it comes to the mid-band, he told attendees at today's show. "The competition doesn't even have plans to get past 260 million this year." Yet the merger with Sprint, and T-Mobile's subsequent dynamism, has galvanized AT&T and Verizon to invest, he insists. Last year's C-band auction raised more than $80 billion for government coffers, with AT&T and Verizon coughing up 85% of the proceeds. Spectrum-rich after buying Sprint, T-Mobile spent just $9.3 billion.

Other attractions of the deal are less obvious, though. Legere, before leaving, promised regulators: "This merger is all about creating new, high-quality, high-paying jobs, and the New T-Mobile will be jobs positive from Day One and every day thereafter." The same pledge came from Deutsche Telekom as regulators considered what impact a merger would have. However, T-Mobile's annual filings with the US Securities and Exchange Commission show that the headcount has fallen from 80,500 across the two operators in 2018, the year the transaction was announced, to 75,000 in 2020. The number was unchanged last year.

How the US compares with other countries on 5G is also up for debate. For one thing, the geographical coverage of 1.8 million square miles that Ray claims to provide is only 47% of the US landmass. No doubt, much of this is unpopulated, but T-Mobile's network also comprises only 102,000 macro cells in total, across all the technology generations. The equivalent ratios in 5G-rich China and South Korea are in the double digits. If denser networks turn out to be necessary for more advanced 5G services, T-Mobile's spending budget may have to go up.