T-Mobile celebrates 5G buildout with booze but no maps

And to mark the occasion, T-Mobile said it will sell limited quantities of self-branded gin and ginger beer through its website.

"As we begin to get back to all the things we have missed, it's time for a celebratory toast with 5Gin and 5Ginger Beer," T-Mobile CEO Mike Sievert said in a release.

However, a T-Mobile spokesperson confirmed that the operator is not providing detailed maps of its own 5G coverage. T-Mobile's coverage map continues to show only "5G" coverage and does not distinguish between "Extended Range" or "Ultra Capacity" 5G. According to T-Mobile, "Extended Range" 5G is slightly faster than its 4G LTE network, while its "Ultra Capacity" 5G supports average download speeds of 325 Mbit/s and peak speeds of 1 Gbit/s. That's much, much faster than the speeds available on T-Mobile's 4G network. 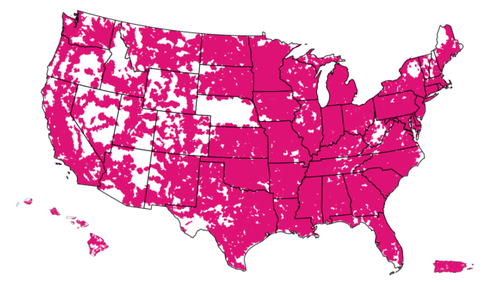 T-Mobile's coverage map does not distinguish between "Extended Range" or "Ultra Capacity" 5G. Click here for a larger version of this image.
(Source: T-Mobile)

The absence of accurate coverage maps from T-Mobile is particularly noteworthy considering the operator is more than a year into its Ultra Capacity 5G network buildout, and has been loudly touting its leadership position in the midband 2.5GHz spectrum that underpins that effort. But without maps, T-Mobile customers cannot check whether they will be able to access the faster speeds supported by T-Mobile's midband spectrum.

Moreover, T-Mobile lambasted Verizon throughout 2019 via T-Mobile's "verHIDEzon" advertising campaign because Verizon did not offer maps of its own 5G coverage. Verizon introduced maps of its own highband, millimeter wave (mmWave) 5G service at the end of 2019.

Overall, the current mapping situation again helps to highlight the messiness around 5G in its early days. Due to the differences in signal propagation across lowband, midband and highband spectrum, there are multiple "flavors" of 5G that provide dramatically different experiences. For example, highband 5G typically only works indoors or in small downtown areas, but it generally provides speeds above 1 Gbit/s. Meanwhile, lowband 5G isn't much faster than 4G. Indeed, when T-Mobile first launched its own lowband 5G  dubbed Extended Range  the operator quietly warned reviewers that it would only be about 20% faster than 4G.