In the early days of the mobile Internet, several European operators embarked on network projects that rank among the boldest in their history. Ditching products from traditional Western suppliers, they turned instead to Huawei, a Chinese vendor touting advanced but low-cost alternatives, across swathes of their networks. This epic redesign would have been a task many hoped never to repeat. Yet Vodafone, whose own reliance on Huawei has grown in the past decade, is now preparing for the possibility of a new swap on a grand scale.

Just a few weeks ago, at the end of October, it issued a tender for the whole of its European radio access network (RAN), a system that comprises around 150,000 mobile sites. Replacing so much equipment, including some 5G gear that has just been deployed, would entail huge expense and risk. But Vodafone insists it is willing. "If we have to swap out our kit, we will do," says Yago Tenorio, Vodafone's head of network strategy. "We have done this in the past."

Sick of the Status Quo 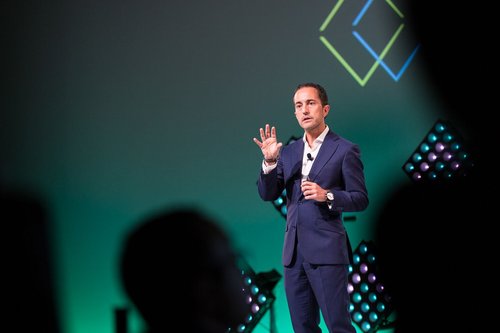 Yago Tenorio, Vodafone's head of network strategy, is determined to give open RAN a boost.

The plans reflect operator concern about the state of the mobile infrastructure market. The disappearance of several equipment vendors in successive rounds of consolidation has left operators with less supplier choice than ever before. Three mammoth firms dominate the sector -- Huawei, Sweden's Ericsson and Finland's Nokia -- and doubts surround them all.

US authorities, notably, see Huawei as a Chinese government stooge and trade cheat, despite its protestations of innocence, and are fighting to have it barred from Western 5G markets. Nokia, meanwhile, messed up its 5G product strategy with a decision to use pricey, margin-squeezing components, and is now scrambling to fix the problem. All that puts Ericsson in an unhealthily strong position. Vodafone is determined to find alternatives.

"Operators are really interested in vendor diversity right now," says Gabriel Brown, a principal analyst with Heavy Reading, the market-research arm of Light Reading. "You have a situation in Europe where they have as much Huawei as they want and politically it is hard to expand that. You have Nokia with challenges in 5G RAN. That leaves Ericsson in prime position and not exactly motivated to negotiate better terms. [The operators] need the prospect of new entrants."

Vodafone has no shortage of reasons to be unhappy about the existing ecosystem. One of the main triggers for the big European tender, says Tenorio, is a lack of 5G progress in several key areas defined by the 3GPP standards body: the so-called Options 4, 5 and 7 (referencing the various options of connecting the radio access network to a 4G or 5G core platform). These, explains the Vodafone man, would allow an operator to make better use of its 4G network in conjunction with emerging 5G capabilities. Option 5, for instance, would let Vodafone provide new 5G core network services on 4G basestations. Yet the level of effort required has led to supplier resistance, says Tenorio. "So far the suppliers have had a very limited appetite for these options."

From Vodafone's perspective, the big three vendors have been similarly resistant to calls for more open network technologies. In a traditional RAN, an interface called CPRI (for common public radio interface) forces an operator to buy radio units from the same supplier of the "baseband" products that process signals (or, at least, from that company's radio partners). Vodafone wants the freedom to use different suppliers and the big three have not budged, says Tenorio. "I am not seeing any signal that Ericsson or Nokia or Huawei would be willing to open interfaces."

You Better Believe It

Vodafone has put the entirety of its European RAN up for tender.

Accordingly, the front page of Vodafone's October-issued request for quotation asks vendors for two things: First, 5G support for the Options 4, 5 and 7 that Vodafone deems so important; and second, compatibility with new open interface specifications developed by the O-RAN Alliance, an association that today includes most of the world's big service providers.

It is through these interfaces, and the "open RAN" ecosystem they support, that Vodafone believes it has the best chance of boosting competition. Consequently, it has become one of the most visibly active members of the Telecom Infra Project (TIP), a Facebook-inspired industry body trying to spur innovation and reduce equipment costs through software and open network technologies. Details of Vodafone's Europe-wide tender were first announced at the annual TIP Summit, held last week in Amsterdam. "We are looking for more modern, up-to-date, future-proof and lower-cost kit. It is a great opportunity for open RAN," says Tenorio. And Europe is only the starting point. "We will follow with the rest of the world. In the end it will be 200,000 sites."

Next page: All or nothing?