Nokia, firing on most cylinders, expects an extra 1B in sales

Amid a heatwave in Finland, Nokia is on a hot streak. The equipment maker had already promised investors a sunnier outlook this year than it had previously given. It is now confident annual sales will be around 1 billion (US$1.2 billion) higher. And the entire business is expected to be a lot more profitable.

The update in today's earnings report for the second quarter is a further encouraging sign for a company that had struggled in 2019 and 2020 after running into problems at its 5G business. If Nokia can hit the midpoint of its revised sales target, revenues will be about 5% higher than previously expected, reaching 22.2 billion ($26.4 billion) for the full year. The new margin target, similarly, could lift operating profits by roughly 600 million ($713 million), to around 2.4 billion ($2.9 billion  again, using the midpoints of earlier and new ranges). 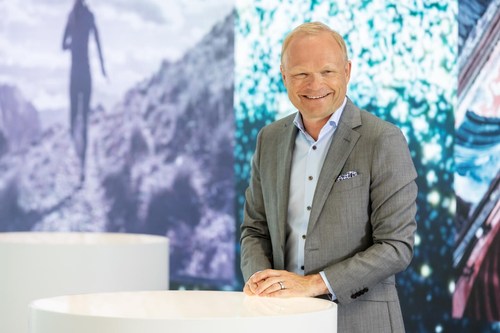 Nokia CEO Pekka Lundmark can look back on a successful first year in charge.

Visibly satisfied on a Teams call earlier today, CEO Pekka Lundmark told reporters that guidance had been raised to reflect a growing addressable market and Nokia's newfound vigor. "Product competitiveness is supporting gross margin competitiveness and on top of that there were good results in operating margin cost control."

The improvements for the second quarter are some of the best Nokia has seen for a while. Sales were up 4%, to 5.3 billion ($6.3 billion), compared with the year-earlier quarter, and they rose 9% on a constant-currency basis. Nokia's operating margin shot to 9.1%, from just 3.3% a year earlier, and its net profit was three and a half times higher, rising to 351 million ($417 million).

Lundmark on a roll

Investors were delighted, sending Nokia's share price up 7% just after markets had opened in Helsinki. It has now risen 26% since August last year, when Lundmark's tenure began. Making a clean break with the previous regime, led by Rajeev Suri, he has scrapped efforts to sell an "end-to-end" portfolio of products to Nokia's customers, instead focusing on better execution at individual units. A restructuring has broken out the all-important mobile business and given other divisions greater autonomy.

Money saved through cost cutting  expected to claim up to 10,000 jobs over the next two years  is being injected into research and development spending, up 5% in the recent quarter, to about 1.06 billion ($1.3 billion). A recent 5G product refresh has already been welcomed by analysts. "The stats around weight, power  are as competitive as any other product I've seen," said Gabriel Brown, a principal analyst with Heavy Reading (a sister company to Light Reading), when the new portfolio was revealed. "On paper, it is highly competitive."

Some validation of that has already come with a 5G deal in China. After missing out last year, when Chinese operators were awarding their initial 5G contracts, Nokia has just secured a 4% share of phase-two work for China Mobile, the country's biggest operator. That puts it ahead of Nordic rival Ericsson, whose share has slumped from 11% in phase one to just 2%  a drop Ericsson blamed on Sweden's decision to ban Chinese vendors from its own 5G market.

"More good news is expected to follow from Unicom and China Telecom  though operations in this market will continue to present challenges," said CCS Insight analyst Richard Webb in emailed comments. Building a joint 5G network, China's two other big service providers have yet to announce details of their own phase-two contract awards.

While the Nokia win equates to just 19,200 basestations, and will not have a major impact on sales, Lundmark says the size of the deal is not what matters. "As we know, the China market is enormously competitive, and we take this award as a testimony and proof that our 5G competitiveness has significantly increased."

Problems surfaced in late 2019 when Nokia was let down by a major semiconductor supplier  subsequently revealed by analysts to be Intel  and resorted to costlier 5G chips supplied by Xilinx. Since then, it has been working on developing its own customized chips, under the ReefShark brand, in partnership with Broadcom, Intel and Marvell. It expects to have entirely phased out the programmable Xilinx chips by the end of next year and its gross margin has been ticking up as the swap-out gathers pace.

"The focus on mainline products, and the progress with Nokia's ReefShark chipset strategy are at the forefront of this business improvement, all of which shows very healthy progress from CEO Pekka Lundmark for the first year of his tenure," said CCS Insight's Webb.

Geopolitics have clearly buoyed Nokia's mobile business in countries like Sweden that have moved to ban Chinese equipment vendors on grounds of national security. But mobile sales rose just 3% on a constant-currency basis, and they dropped 2% in the report, to just less than 2.4 billion ($2.9 billion). Nokia is still suffering from last year's setbacks in China as well as a recent loss of mobile market share in the US, where Verizon picked South Korea's Samsung over the Finnish company for a major 5G contract.

That meant it was other divisions that fueled sales growth in the second quarter. At network infrastructure, the division that lumps together Nokia's Internet Protocol, fixed access and optical products, revenues were up 15%, to about 1.8 billion ($2.1 billion), as demand soared amid the pandemic for broadband technology.

Meanwhile, the small but highly profitable Technologies unit, responsible for brand and technology licensing, managed an 18% increase in sales, to 401 million ($476 million), and accounted for nearly half of Nokia's operating profit for the quarter.

This was inarguably a strong set of results from Nokia, but it was not provided without a few words of caution. Besides noting the market share loss and price erosion in North America as second-half "headwinds," Lundmark reminded investors of the ongoing semiconductor shortage that has been so disruptive in some sectors.

"The components situation continues to be tight, and we expect it to continue through the second half and well into 2022," he said. "The market is so strong that we would be able to grow faster if there were more components available." If Nokia can boost its operating profit by 600 million ($712 million) even with these constraints, shareholders will not much care.