Speculation about the fate of this year's Mobile World Congress has gripped the telecom industry for much of the past year. Normally held in late February, this year's event was postponed until June because of coronavirus. When the rescheduling happened last year, organizers probably expected 2021 to look more normal than it does.

But after suggestions dates could slip once again, the GSMA looks determined to press on. In recent days, John Hoffman, the organization's CEO, has talked up the possibility of attracting 50,000 attendees to what will probably be a much hotter and sunnier Barcelona than most MWC regulars usually experience. Today, the GSMA published its health-and-safety plan for running that show. One way or another, MWC is happening.

Signed off by Catalan heath authorities, the plan should have most epidemiologists humming contentedly behind their face masks. Set for the full hygiene makeover, the hangar-like conference venue will be kitted out with testing facilities, "touchless environments" and contact-tracing technologies. There will be something called "revamped catering," which sounds like unmasked schmoozing at the nearest bar will be a non-starter. Coronavirus marshals will be on standby to break up any dangerous handshaking activities. French air kissing, if still practiced, is probably a capital offense. 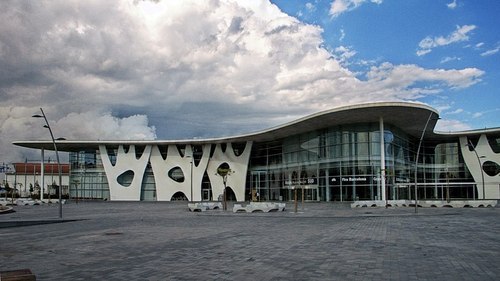 The MWC venue is set to be much quieter than normal this year.

Short of wearing a full hazmat suit, the average traveller, vaccinated or not, can expect more health-and-safety checks than someone visiting an Ebola zone. That will start at the airport when many flyers will have to produce evidence of a negative test taken recently. Negative rapid test results, valid for 72 hours, will also be needed to enter the venue. Temperature checks will be mandatory at all access points. Anyone who strays outside the one-way lane system will receive a socially distanced reprimand. The unmasked, lest there is any doubt, will not be allowed inside.

No one can blame the GSMA, which is desperate to host a money-spinning show kiboshed by coronavirus in 2020. It will do whatever it must (within reason) to ensure MWC takes place. This event, then, is in itself a big test on a couple of levels. First, it will show whether a huge trade show is feasible with so many restrictions in place. Second, it will demonstrate if there is an appetite for business travel on a major scale.

Because 50,000 attendees would be some achievement. In a virus-free year, MWC would usually attract about 100,000 visitors from all corners of the globe. Hoffman thinks around half will still be willing and able to travel. But the GSMA also concedes that restrictions could affect people travelling from countries including the US and the UK. "We would expect to have a lower number of attendees from those geographies," says Stephanie Lynch-Habib, the GSMA's chief marketing officer. Her organization is working with Spanish authorities to ease travel, but it cannot predict "where the restrictions will go," Lynch-Habib told Light Reading, or if they will be imposed or lifted as the show nears.

What's more, many travelers may also face potentially disruptive quarantines on their return home. And regardless of the pandemic, some executives will have other plans for late June and early July, when they would not ordinarily plan to be working in Barcelona.

The experience of smaller venue re-openings in some countries has been a sharp drop in footfall. The success of vaccination programs might persuade some of the stay-at-homers to return. But the vast majority of people around the world have not received a vaccine. On a planet of about 7.7 billion people, just 284 million vaccines have so far been administered, according to the latest data.

There has already been some negative publicity about the GSMA plans. Just last month, The Verge ran with the headline: "MWC insists on holding potential COVID-19 superspreader event in Barcelona." How Catalonians feel about the scheme is unclear. While hoteliers, taxi drivers and restaurant owners may be delighted, the decision to invite international tennis players into Melbourne for this year's Australian Open proved unpopular with some locals. Even if visitor numbers are low, MWC will entail far more international travel than that.

The chief concern for conference people has to be whether the "new normal," a horrible and already hackneyed expression, means online events replacing giant shows just as home working replaces the office. Fans of MWC say nothing can substitute for the face-to-face meeting over a plate of pimientos, the opportunity to see clients and contacts in the flesh. But the absence of MWC last year did not stop vendors from announcing major deals. And the face-to-face meeting could lose its appeal when masks, social distancing and hand sanitizer are involved.

On a more positive note, some of the big equipment makers that normally travel to the show have told Light Reading they plan to be there in June. They include mega vendors Ericsson and Huawei, both of which have already signed up for their giant booths. Others are uncommitted, and Lynch-Habib declines to name companies that have said they will come. "I'd rather not go down the naming route today," she says. The hope must be that today's health-and-safety update proves a reassurance and not a deterrent.