Mediacom, a cable operator that reaches about 1.5 million homes and businesses in 22 states, said it will tap Ericsson's 4G and 5G RAN product mix to launch CBRS-powered Internet services.

Mediacom did not immediately identify which areas it will focus its CBRS efforts on first, and whether it intends to use both licensed and unlicensed CBRS spectrum.

Light Reading has asked for further comment. Word of Mediacom's work with Ericsson comes after Mediacom spent about $29.47 million for 576 CBRS licenses. 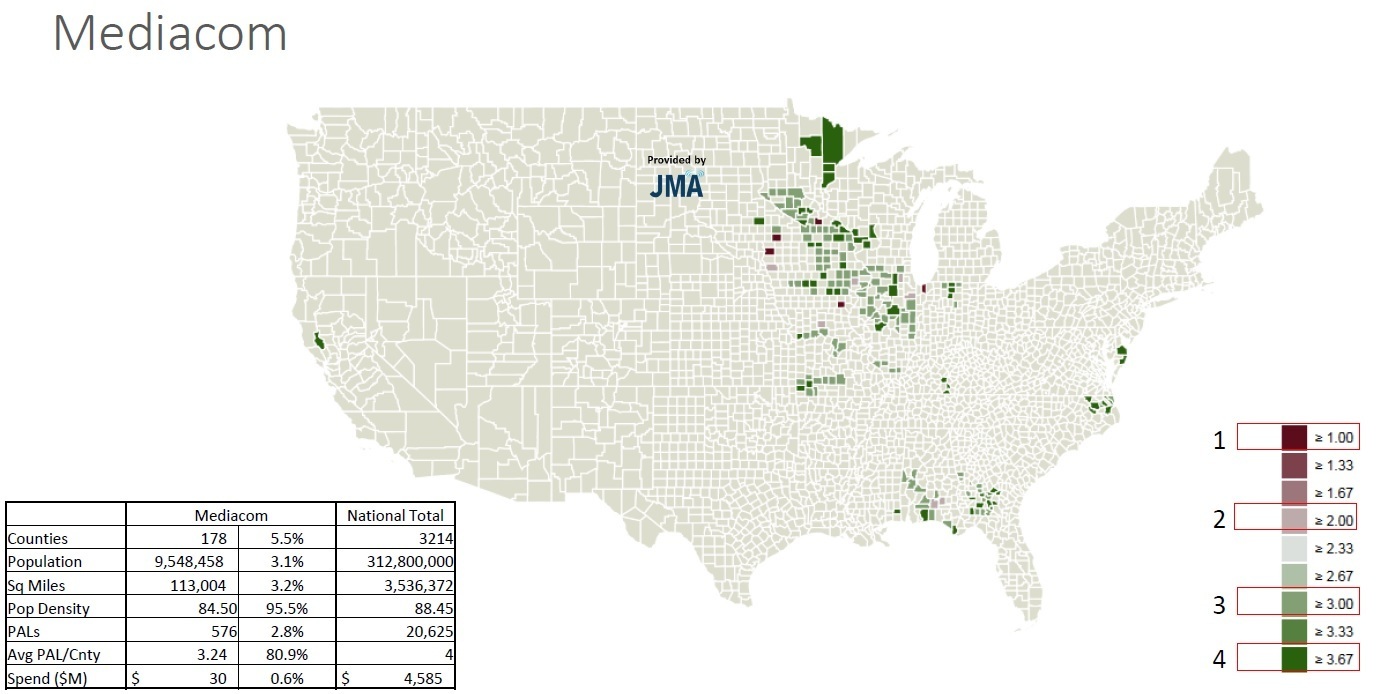 Mediacom was among the US cable operators that bid for and won licensed CBRS spectrum.
(Source: From maps supplied to Light Reading by Stephen Wilkus of Spectrum Financial Partners, Moise Advisory and JMA Wireless.)
Click here for a larger version of this image.

Update: Mediacom initially launched its fixed wireless service, branded Mediacom Bolt, in parts of Alabama, Iowa and Florida, in July 2021, a company spokesperson said. Mediacom, the official added, plans to gradually bring more towers online in the counties where the company won CBRS spectrum, and that the service will primarily rely on licensed spectrum. Mediacom also confirmed it has licensed CBRS spectrum in 178 counties across 16 states.

Per the Mediacom Bolt website, the service currently offers three tiers of service:

Mediacom Bolt customers who exceed their monthly data limits will be billed $10 for each additional bucket of 50GB.

Mediacom will use CBRS-powered fixed wireless access services to reach new communities and underserved rural areas, Per Wahlen, VP and head of business development for Ericsson North America, noted in the press release.

Ericsson said its platform will enable Mediacom to offer fixed wireless access Internet services up to nine miles from each tower location, enabling the cable operator to deploy broadband to "thousands" of new, underserved homes and businesses in rural portions of Mediacom's multi-state footprint.

"We are thrilled to work with a trusted partner like Ericsson to launch robust fixed wireless broadband services in areas of the country that need it the most," added JR Walden, Mediacom's CTO.

Mediacom is among the first cable operators to shed light on plans to use CBRS to deliver broadband services. Charter Communications has also hinted at using CBRS to extend broadband to new, unserved areas, but has largely expressed interest in using CBRS in high-traffic areas to help offload MVNO costs.