Suarez, for those in the dark, is a Uruguayan soccer star who currently plays as a striker for Spanish team Barcelona. Technically, he is brilliant  so dextrous with his feet he could have fingers in place of toes.

He is also one of the dirtiest players in the game, with a vampiric enthusiasm for biting opponents. He was first caught doing it in 2010, earning the sobriquet the "cannibal of Ajax" when he was a player for the Dutch side. Three years later, at Liverpool, he chomped into Chelsea player Branislav Ivanović. Undeterred by the lax punishments, Suarez next sank his teeth into Italy's Giorgio Chiellini at the World Cup in 2014. Replays showed a dental impression in Chiellini's shoulder, as if it were the mould for a mouth guard. 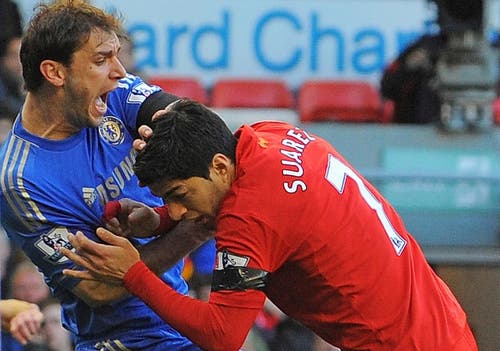 After three such infractions, any average player would have received a lifetime ban. But not Suarez. Soccer authorities knew that losing a star of his quality would do incalculable damage to the sport. Now 33 years old, he remains on the team sheet of one of the world's biggest clubs.

Much the same concerns loom over a UK government decision about banishing Huawei from the UK's 5G market.

The Chinese equipment vendor is rightly seen as one of the most technically proficient in the world. Fans and opponents highlight its superiority over rivals in some areas. Excommunicating it would hurt the entire game and leave customers out of pocket, goes the argument. 5G would suffer for years.

Yet, increasingly, Huawei looks to its opponents like one of the dirtiest players around. Unlike Suarez, it has never been caught in flagrante delicto. But the checklist of possible sins and misdemeanors grows longer by the day. It is also as Chinese as Peking duck. Even if Huawei really is saintly, its government is most certainly not, as far as public opinion in the West is concerned.

Huawei robbery
To recount, Huawei has repeatedly been accused of filching intellectual property from rivals including Cisco and Canada's Nortel, whose demise coincided with Huawei's ascendancy, as described in this excellent piece of investigative journalism by Bloomberg this week. Huawei has repeatedly denied these allegations, but many outside China remain unconvinced.

Using its misbegotten gains, Huawei then spent years undercutting rivals with the succor of China's state-owned banks, say critics. Publicly listed firms in Europe and North America, including Alcatel-Lucent, Ericsson, Nokia and Nortel, simply could not withstand this government-backed assault. Although questions (and eyebrows) were raised, most Western governments, including the UK's, did not stop their national operators from buying Huawei equipment. Some became almost entirely dependent on the firm, according to new research by Strand Consult.

More recently, Huawei has been accused of flogging equipment to Iran, in breach of US trade sanctions, and of trying to cover up its activities there. Meng Wanzhou, its chief financial officer and the daughter of founder Ren Zhengfei, is under house arrest in Canada, awaiting possible extradition to the US to face related charges of fraud. Huawei is fighting the case, but documents uncovered by Reuters are damning.

No one has ever proved Huawei's products are a conduit for Chinese spies or would allow China to cripple other countries' national infrastructure. But is the risk worth taking? Huawei's Chinese identity clearly puts it under the control of an autocratic, unaccountable government, just like any other Chinese company or citizen. As this week's brutal intervention in Hong Kong has demonstrated, that government now looks like a sinister force in international affairs.

"China is much more aggressive than it was in the past," says John Strand, the CEO of Strand Consult. "The list of things they don't tolerate is becoming longer and longer and the way they react is becoming harder and harder. You cannot compare the China you had five years ago with the China you have today."

Hong Kong could, indeed, be the final straw for Huawei in the UK. After a Chinese crackdown on the supposedly semi-autonomous region, Johnson this week offered UK citizenship to 3 million Hong Kongers. China's response was to say it would block the citizenship plan. As relations deteriorate, Johnson may warm to the idea of a Huawei ban.

Little red card?
And yet a ban would cost UK operators about £1.5 billion (US$1.9 billion) in replacement costs, according to Enders Analysis, a market-research firm. It would leave the UK reliant on two big Nordic vendors  Ericsson and Nokia  for most of its mobile equipment. Worse, it would hinder the rollout of 5G, say operators, risking the UK's technology advantage.

Largely for these reasons, the UK, under US pressure, meted out much softer restrictions in January, limiting Huawei to 35% of any 5G radio access network and 35% of any fiber-based broadband one. The vendor was banned from the sensitive "core," the control center of any network, where operators had themselves decided it was too risky to use.

Unfortunately for Huawei, authorities may feel the case for an outright ban now outweighs the telco concerns. If 5G really is that important  and Vodafone this week said it could be worth more than £150 billion ($187 billion) to the UK economy by 2030  avoiding "bad actors" would seem paramount. Next to that figure, a £1.5 billion bill to guarantee national security would look small.

Operators still think keeping Huawei out of the core mitigates the risk. But this argument sounds tenuous. Arun Bansal, the head of Ericsson's business in Europe, reckons it will be harder to say where core ends and radio begins in 5G networks. "That boundary will disappear in 5G simply because of the way the architecture will be done," he told Light Reading in a previous interview.

It is not just about any security threat China might pose, either. Recent US sanctions may cut off Huawei's access to vital components made with US equipment or design expertise, including semiconductors from Taiwan's TSMC. Huawei's inventory could run out within a year, according to some analysts, threatening the company's very survival. Switching to other vendors may be a prudent move by UK operators.

New equipment rivals are emerging, too. South Korean electronics giant Samsung is at the forefront of that crowd. It has already landed deals in other markets where operators are swapping out Huawei, including Canada (with Telus) and New Zealand (with Spark).

Daryl Schoolar, an analyst with Omdia, says the South Korean vendor was previously wary of investing in Europe while the fate of Chinese players remained uncertain. "But this was two years ago, and Huawei and ZTE's position appears to be getting worse, not better," he says.

NEC and Fujitsu, Japanese firms that are trying to challenge the big vendors in parts of the mobile infrastructure market, could also be viable options. Just this week, Fujitsu landed a deal to provide radio equipment in the US (for Dish, which is building the country's fourth mobile network). NEC has reportedly been in talks with UK authorities.

As for the delay to 5G, doubts persist over whether this technology will be as game-changing as cheerleaders claim. What's clear is that it will not make a huge difference at first, merely supercharging connections for smartphone customers and freeing up space on congested mobile networks.

The UK can arguably afford a delay, too. Omdia ranks it ahead of every other European country bar Switzerland on 5G preparedness. Some have yet even to license spectrum for use with 5G services, and the coronavirus pandemic has prompted several countries to postpone these auctions. Handsets might take longer to appear as well, including a 5G iPhone.

The mood is definitely changing. Earlier this week, Oliver Dowden, the UK's culture secretary, told parliament that US sanctions were "likely to have an impact on the viability of Huawei as a provider for the 5G network." Discussing Huawei with reporters, Johnson emphasized a need to protect the UK from "hostile state vendors." Unlike Suarez, Huawei could soon receive a permanent red card.

AI/ML for the 5G RAN
5G for the Internet of Things: Connecting Everything, Everywhere
Deploying mmWave to unleash 5Gs full potential
Whats in the future of 5G millimeter wave?
How to build high-performance 5G networks with vRAN?
More Blogs from Morris Lore
Ericsson plans return in cheery news for MWC, but Sony may be out