The young woman in the Ericsson photo appears far too happy to be wearing a hard hat and lugging radio units, but that is the point.

Earlier generations of equipment were so heavy that a box would have wrenched her arms from their sockets. With the new lightweight units, she looks as if she is ambling merrily down the local high street, a bag of shopping in each hand.

At just 12 kilograms, the 5G box Ericsson launched this week seems to be as lightweight as these units come in their category. The Swedish company, of course, is promoting it as the smallest and lightest in the industry, and no rival has been quick to refute the claim.

It is about 8 kilograms lighter than its predecessor and could rather upset the recent efforts by Nokia, Ericsson's Finnish rival, to seize the leadership position in this field. 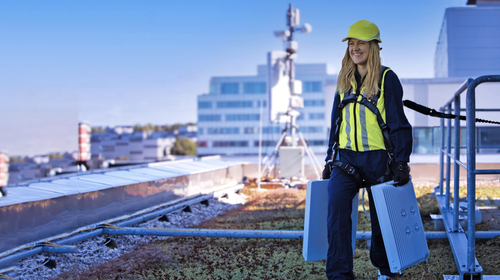 Just another jolly day on the rooftop.

Back in June, after a 5G refresh, Nokia began advertising a 5G "massive MIMO" radio unit that included 32 transmitters and 32 receivers (the so-called 32T32R configuration) and weighed 17 kilograms.

"What is fantastic about the new product platform is that it will put us in the lead in the weight of what is the highest-volume massive MIMO configuration across most of the markets in the world," said Tommi Uitto, the head of Nokia's mobile business.

But the 12-kilogram unit Ericsson is touting this week falls into exact the same 32T32R category, and a 5-kilogram difference sounds potentially significant.

The current obsession with weight is not just for appearances. Lighter boxes, for one thing, require less man- or womanpower, as Ericsson tries to convey in its marketing photo. For the service providers rolling out this equipment, that could promise less effort and lower costs.

More importantly, bulkier equipment gobbles energy, something the UK's Vodafone complained about during a press conference earlier this month.

When it began its 5G rollout, it was relying on units that each included 64 transmitters and receivers, weighed as much as 60 kilograms and "burned electricity for fun," in the words of Ker Anderson, Vodafone UK's head of radio and performance.

We don't want boxes falling from the sky

Another problem with heavy equipment is the stress it puts on masts, brackets and other supporting infrastructure. Massive MIMO units usually need to be installed at the edge of a rooftop to get the full benefits of beamforming, says Gabriel Brown, a principal analyst with Heavy Reading (a sister company to Light Reading).

Beamforming is used to focus the mobile signal on a user device, rather as a flashlight can be shone directly at a small object.

In the absence of lightweight units, operators have had to invest money in reinforcing site infrastructure. The risk, otherwise, is that brackets buckle and the radio unit falls off, a nightmare scenario for any operator.

The main attraction of the smaller boxes for Vodafone is that it can spend less on reinforcements and not have to worry. Indeed, when it comes to savings on labor, a Vodafone spokesperson said it was improbable in any case that rooftop riggers would be working alone and required to lift boxes without help.

Anderson, then, was chuffed when Ericsson, Vodafone UK's main supplier, produced a 32T32R unit weighing less than half as much as the 64T64R one. Thanks to improvements on the technology side, it performs just as well and has reduced energy consumption by 43%, Anderson told reporters, describing the box as a "godsend" for his business.

The 12-kilogram unit goes even further. It will run on 3.5GHz spectrum, the band widely licensed for use with 5G services, and is reckoned by Ericsson to be 10% more energy-efficient than its predecessor. It appears to have been developed in partnership with BT, Vodafone's main UK rival, which is pivoting from 64T64R to 32T32R units as part of its 5G rollout strategy, Light Reading has learned.

It does not seem to beat Nokia on all criteria, though. In June, the Finnish company said its 17-kilogram box comes with 400MHz of instantaneous bandwidth (IBW), the frequency range in which it can operate. A spokesperson for Ericsson says the 12-kilogram unit comes with IBW of 200MHz. That suggests it made a trade-off to reduce the weight.

Once again, Ericsson took the opportunity in its release to laud the efforts of its in-house silicon unit. When it downsized its 64T64R unit at the start of the year, the weight reduction was attributed largely to a "cadence" of improvements in the design of application-specific integrated circuits (ASICs), the customized chips that go into its massive MIMO units.

Ericsson Silicon has clearly benefited from a sharp increase in group spending on research and development, which rose from 31.6 billion Swedish kronor ($3.1 billion) in 2016 to SEK39.7 billion ($4.6 billion) last year.

It will be interesting to see how Ericsson's rivals now respond. When Ericsson cut the weight of its 64T64R unit in January, Huawei struck back a few days later, boasting a box just 1 kilogram lighter. Such a tiny difference will hardly matter to customers but is good for the marketing brochure. Asked how much its latest 32T32R unit weighs, the Chinese firm had no data to share.