Tie-ups between service providers from different markets are rarely very interesting. Often, they are about issues as humdrum as roaming. Sometimes, joint procurement or exerting pressure on vendors is the intention. A new partnership between Germany's Deutsche Telekom and South Korea's SKT is much higher up the excitement scale, although it does not come entirely out of the blue.

It will involve the formation of a 50:50 joint venture, to be headquartered in Germany. The purpose of that business will not be anything service-related. Instead, it will cross the line that usually separates operators from their suppliers. Initially, the goal is the development of 5G products that will boost indoor reception. In time, the companies believe there will be opportunities in augmented and virtual reality, mobile edge computing and apps.

The first move would take them into a multi-billion-dollar market for so-called distributed antenna systems (DAS). Today, that is served by vendors such as CommScope, Corning and Axell Wireless. Drawing on third-party forecasts, Deutsche Telekom and SKT say market sales are rising at a compound annual growth rate of more than 10% and will hit $10.3 billion in 2023. 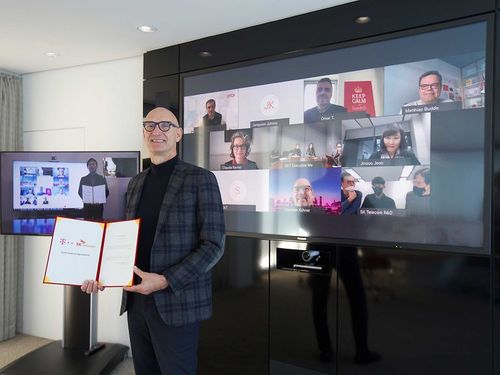 Deutsche Telekom's Timotheus Höttges is happy about his latest tie-up with SKT.

The gap they see is in the area of 5G repeaters, antennas that would essentially catch and strengthen a mobile signal before handing it down the line. These may be critical if 5G is to become an alternative to other in-building wireless technologies. Yet none of the existing DAS players has taken much of a lead, according to the operators. Their joint venture, they say, "will be well-positioned to pioneer the market."

Most of the wizardry comes courtesy of SKT, which will contribute all relevant technology assets to the new joint venture. As one of the first operators in the world to launch 5G, the South Korean firm has been highly regarded for its technology prowess and the role it has played in the wider 5G ecosystem. In its last annual report, it notes a patent filing after making improvements to battery consumption and call quality in antenna technology.

Deutsche Telekom's main role seems to be as a gateway into Germany and Europe. Trials of SKT's technology have already been carried out inside facilities in Berlin, Hamburg, Bonn, Cologne, Munich, Darmstadt, Frankfurt and Leipzig. Those led to a significant improvement in the voice and data experience for customers, according to the operators.

"We will start with the repeater, but this joint venture is aiming at a much higher goal," said Timotheus Höttges, Deutsche Telekom's CEO, in a statement. "That goal is to create major innovations for both companies in the years to come."

The joint venture, which still needs regulatory approval, builds on a deepening relationship between the European and South Korean operators. Ties have grown ever since Alex Choi, formerly the chief technology officer of SKT, became Deutsche Telekom's senior vice president of technology in early 2018. A few months later, SKT agreed to make an investment in MobiledgeX, an edge-computing startup founded by Deutsche Telekom, while the German operator invested the same amount in ID Quantique, an SKT-backed developer of quantum cryptography.

Plans for the joint venture announced this week first surfaced at Mobile World Congress 2019, when the two operators signed a strategic partnership agreement. In February this year, Deutsche Telekom was reported to have begun testing a 5G repeater co-developed with SKT. Trials were apparently due to be carried out with some 200 customers.

That line dividing operators from vendors is now looking blurrier than ever. Rakuten, an e-commerce company building Japan's fourth mobile network, has taken ownership stakes in some of its most important technology developers. Reliance Jio, India's largest service provider, is said to be working on a homegrown set of 5G technologies. The dismissal of China's Huawei from various markets has created a void that some operators believe they can help to fill.

Even so, telco efforts to be more than just connectivity providers have not typically been a success. Despite the arrival of 5G, and the opportunities that brings, most operators have failed to shake off a perception they are glorified utilities, or "dumb pipes" to their most ardent critics. When it came to MobiledgeX, Deutsche Telekom decided innovation worked best outside the constraints of the mainstream telco organization. At this stage, it is unclear how the joint venture with SKT will operate.

Its other challenge will be on resources. Operators have deep pockets but commit much of their spending to investments in major infrastructure projects, such as the rollout of 5G and fiber-optic networks. Research and development have been the prerogative of the equipment vendor. That particular line will be a difficult one to cross.