Cellnex's stock-diluting and debt-fueled mission to buy up European towers seems to have no end. Just weeks after splashing about 10 billion ($12 billion) on towers owned by Hong Kong's CK Hutchison, the Spanish firm has looked under the worn mattress of its balance sheet and found another 5.2 billion ($6.2 billion) to spend in France. The deal with Altice France and Starlight Holdco gives it full control of Hivory, a company that owns about 10,500 French towers used mainly by Altice's SFR unit.

The deal has yet to be signed off by regulators, but it seems unlikely to meet with complaints. As they fret about mergers between telcos, authorities have been seemingly oblivious to the dozens of tower transactions signed in the last couple of years. If Cellnex's latest splurge does not provoke concern, then perhaps nothing will.

Back in 2019, Ernst & Young (EY)  in a report it wrote for the European Wireless Infrastructure Association  reckoned there were about 420,000 mobile towers in Europe, forecasting annual growth of 1% to 3%. After its latest deal, Cellnex says will own about 120,000, or about 29% of the 2019 total, according to EY. In a relatively short space of time, it has become a regional powerbroker.

Key players in the European tower sector in 2018 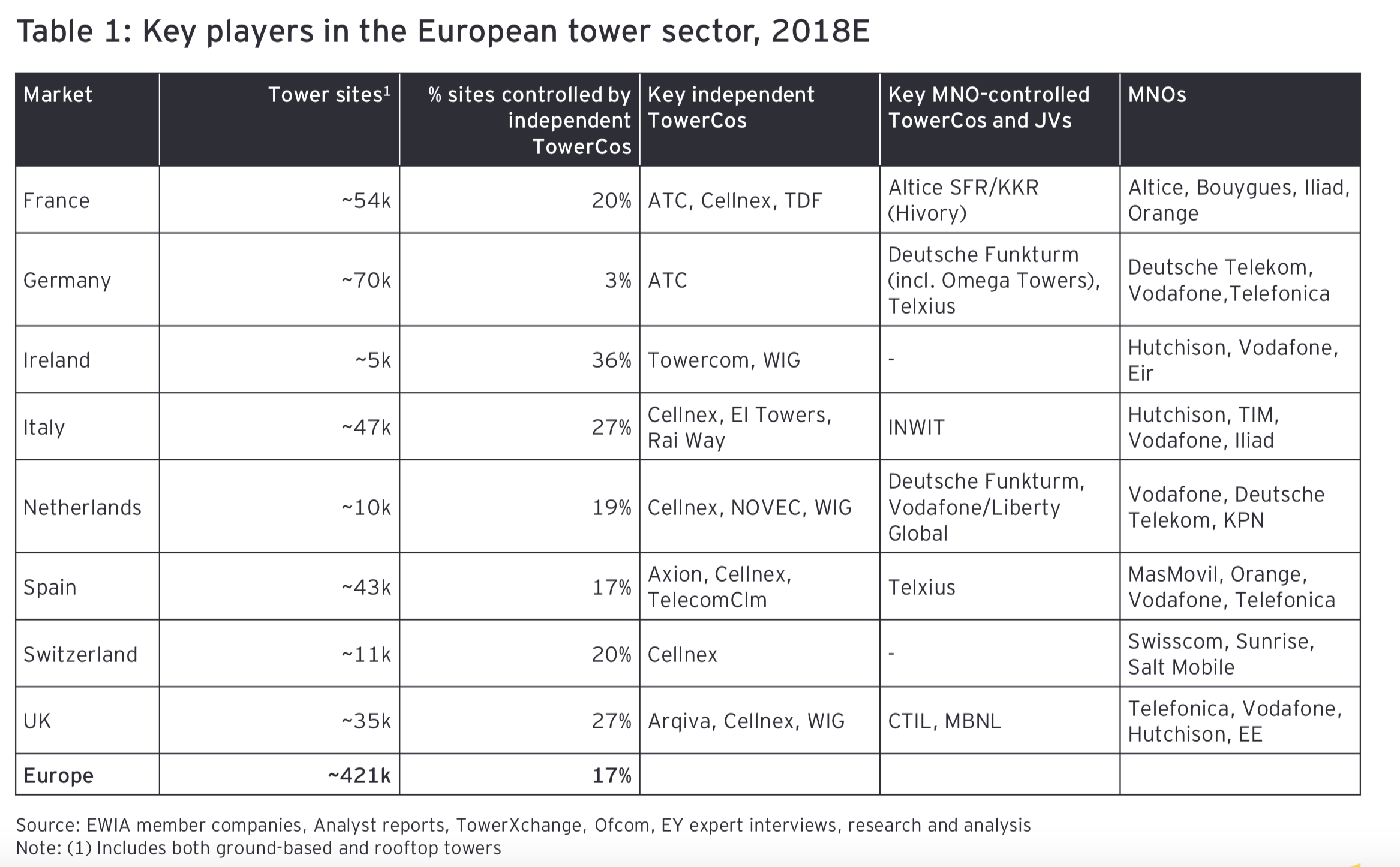 It looks especially daunting in France. Cellnex had already struck deals with Bouygues and Iliad, SFR rivals that have sold towers to pay off debts. If the Hivory deal goes ahead  as it probably will  the Spanish firm will have 26,740 French sites. Judging by EY's 2019 report, which estimated there were about 54,000 tower sites in France that year, it would control roughly half the French market. Three of the country's four network operators would be Cellnex tenants. That does not sound healthy.

Cellnex towers over the Italian infrastructure market, as well. After its deals with Iliad and CK Hutchison, it has 24,549 Italian sites, or about 52% of the 2019 total, according to EY's data. If its takeover activity is allowed to continue, Cellnex could soon become a dominant force. 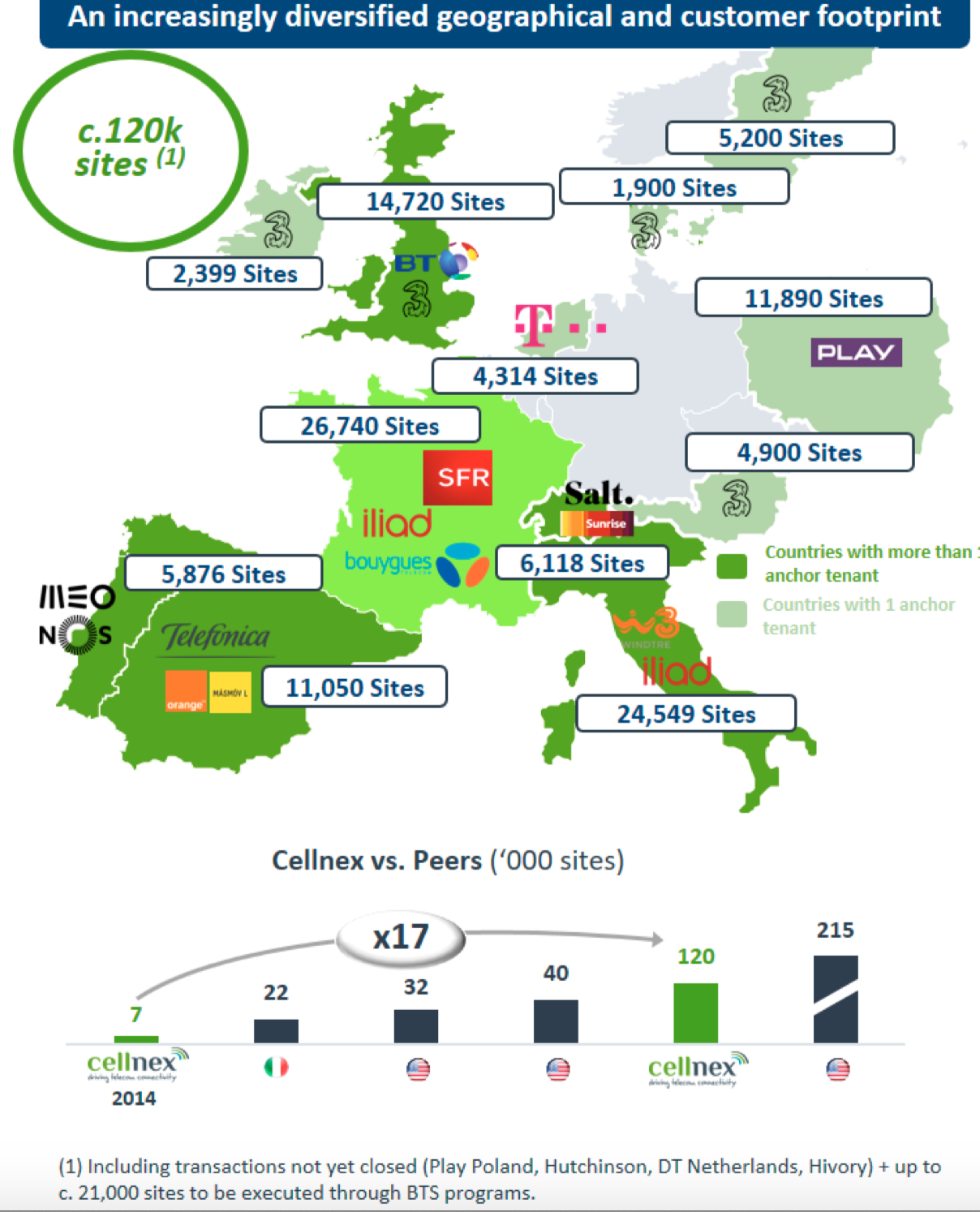 Investors are drawn to this acquisition-hungry firm as a relatively safe bet. In a world of smartphone addicts and surging data consumption, service providers will always need somewhere to hang their electronic equipment. The towers they use are a guaranteed source of revenues and profits. Their biggest owners are the property barons of the telecom sector.

That explains why Cellnex's share price has nearly quadrupled in the last five years, and why Cellnex, with a market capitalization of 23.5 billion ($28.2 billion), is currently worth 3.2 billion ($3.8 billion) more than Telefónica, which makes 28 times as much in revenues.

Peaking at 55.12 last October, Cellnex's share price has been falling ever since, however. It was down 2.4% this afternoon, at the time of writing, because Cellnex intends to fund its latest transaction through a 7 billion ($8.4 billion) rights issue, diluting the value of its shares. In the meantime, leverage is up sharply. Debts were more than 6.7 times its annual earnings after the deal with CK Hutchison, according to Fitch Ratings. To some naysayers, the business outlook does not justify spending tens of billions on towers.

More towers are planned, though. Under the Hivory deal, there is a 900 million ($1.1 billion) provision for the rollout of another 2,500 sites over the next eight years. Its latest rights issue, it says, will finance projects worth up to 18 billion ($21.6 billion) in total, with 7 billion ($8.4 billion) of that earmarked for Hivory and a separate deal with Germany's Deutsche Telekom in the Netherlands.

Service providers should worry. Consolidation means a dwindling number of firms own a large share of the region's mobile infrastructure. With less choice, rental fees could rise in future. If there were no risk, then Deutsche Telekom, Orange and Vodafone would not look so determined to retain big ownership stakes in their mobile sites. But if charges do increase, then consumers might end up footing the bill. Authorities should probably consider if they really want to sit this one out.