The FCC's first big midband spectrum auction, for 3.5GHz CBRS licenses, ended with gross proceeds of $4.6 billion. However, the agency won't release the identity of the winners until later this week or next week.

Verizon and the nation's cable companies are expected to walk away with the bulk of the licenses.

While the FCC is not releasing the identity of CBRS auction bidders, it is releasing information on which specific geographic licenses received bids. And one important takeaway from the auction's initial results is that demand stretched across the country, including in big and small markets.

And according to Ari Meltzer and Rick Engelman with Wiley Rein, a law firm that is heavily involved in telecom matters, demand for spectrum was the hottest in big markets ranging from Los Angeles to Chicago to Houston. That's not surprising considering network operators often generate the most revenues from large US cities.

The firm published auction prices for the 25 largest US counties by population: 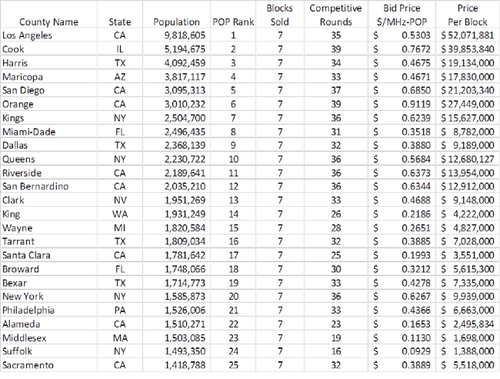 Los Angeles was the county that saw the most demand in the US.
(Source: Wiley Rein)

The firm also published the most expensive markets in terms of per MHz-POP pricing: 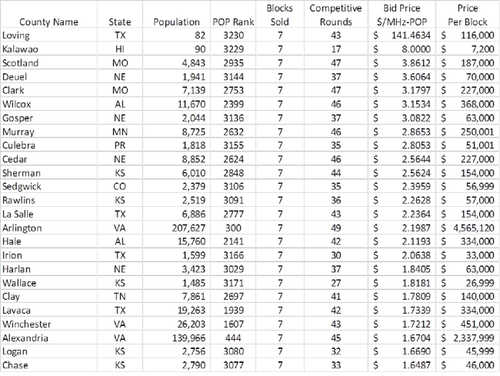 A tiny county in Texas generated the most expensive bids.
(Source: Wiley Rein)

Given that the auction raised much more than some initial estimates, which ranged as low as $1.3 billion, the FCC cheered the results.

"This is a banner day for American leadership in 5G and for American consumers. The 3.5GHz auction has concluded, and I can say unequivocally: It was a resounding success," said FCC Chairman Ajit Pai in a statement.

But the Wall Street analysts at Raymond James said that the CBRS auction will be overshadowed by the upcoming C-band auction in November.

"While CBRS spectrum could find significant use in 5G development, especially through expanded in-building and private network opportunities, we think the upcoming C-band auction will garner significantly higher bids and prices," they wrote in a note to investors. "Auction 107 [which is the C-band auction] will offer 280 MHz of spectrum, compared to just 70 MHz in Auction 105 [which is the CBRS auction], and C-band should be more valuable to carriers than the CBRS Band that had power limits, tiered access, and important incumbent users (most notably the US Navy in coastal areas)."