Most people would not think of Apple as much of a 5G stakeholder or specialist, and yet the iPhone maker is looking like the main beneficiary of the new mobile technology. Sales for its recent second quarter soared 27% year-on-year, to an astonishing $81.4 billion, as consumers rushed to buy its latest, 5G-compatible products.

Contrast that with Ericsson. The Swedish equipment maker's entire religion is 5G, but its sales for the equivalent period slipped 1%. Apple barely acknowledged the existence of 5G until the iPhone 12 was announced last year, and has a testy relationship with Qualcomm, the brains behind the iPhone 12's 5G chips. Now it appears to be swimming in 5G money.

CEO Tim Cook certainly attributes the recent quarterly success to the newest generation of mobile technology. "We're only in the early innings of 5G, but already its incredible performance and speed have made a significant impact on how people can get the most out of our technology," he said on the company's earnings call. "Customers love iPhone 12 for its superfast 5G speeds." 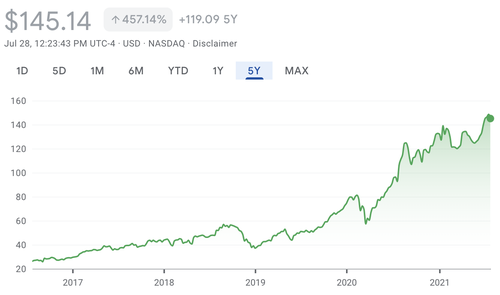 The bump in iPhone revenues is clearly much bigger than Apple saw from the iPhone 11. In the quarter that was launched, iPhone sales rose less than 8%. For the subsequent one, ending in March 2020, they fell 7% while investors panicked about coronavirus, China's preference for local brands and a lack of smartphone innovation. Over the last three quarters, during which the iPhone 12 has been available, iPhone sales are up a massive 38%, to more than $153 billion.

While some economies recover from last year's lockdowns, there is also a hunch that iPhone addicts chose to skip the iPhone 11, aware that an even better model was just around the corner. Why buy a 4G iPhone if a similar model that works on 5G networks will be out a year later? This previous hiatus in buying could explain the current boom, as fanboys in iPhone cold turkey indulge their addictions through overdue upgrades.

For iPhone pusher Apple, that translated into a 93% surge in net income, to more than $21.7 billion. And Cook thinks the 5G good times will continue. "The penetration on 5G is obviously still very, very low," he said. "And so we feel really good about the future of the iPhone."

The average consumer, though, will not see much improvement. Design-wise, the iPhone 12 is a bit lighter and sharper-edged than the curvy iPhone 11, but it sports no ground-breaking new features. A 5G network service is not widely available in most countries, and only gigabyte-guzzling gamers and TV addicts, permanently glued to their phones, are likely to notice any 5G difference. Shaving milliseconds off the download time for images, news stories and even video snippets is not something most people will cherish.

Still, as more iPhone 12s and other 5G devices enter circulation, the chances will grow that a "killer app" is eventually conceived  the equivalent, perhaps, of Uber in the 4G world. That would be good news for Apple, which pockets a share of the revenues generated by app sales, and convince the 4G laggards to finally upgrade.

Today, the industry looks short of ideas. Evidence of that can be seen in the latest wacky advert by the UK's BT, in which someone atop a Welsh mountain is shaved by a robot controlled by a smartphone-wielding London barber. The thing about killer apps is that they are not actually supposed to kill you.