Amid 5G capex spike, tower cos diverge on strategy

All of the big 5G providers in the US  and even some small ones  have promised to spend heavily on their networks this year. And that's stoking plenty of excitement  but not necessarily conformity  among the nation's big cell tower owners.

"I can't think of another time in the history of our business where we've had four well-capitalized carriers with spectrum and the desire to deploy network. So we're certainly riding the wave of that," Crown Castle CEO Jay Brown said this week during his company's quarterly conference call, according to a Seeking Alpha transcript of the event.

But Crown Castle's plans to invest in the future differ significantly from rivals like American Tower and SBA Communications.

A spike in capex

Dish Network, Verizon, T-Mobile and AT&T have all spent billions of dollars on new spectrum licenses during the past year or so. And now all of them are planning to significantly increase spending on their 5G networks to put that spectrum to use.

All that capex spending isn't lost on cell tower executives like Crown Castle's Brown. After all, tower companies typically charge rent for each square foot of space operators use for their networking equipment, including the new equipment they'll need to put new spectrum licenses into action. "They've got a significant amount of spectrum to be deployed, and they have the capital to be able to deploy that," Brown said of the nation's top mobile network operators.

"We expect to continue seeing elevated domestic leasing activities through the balance of this year and well into 2022," SBA CEO Jeffrey Stoops said during his company's recent quarterly conference call, according to a Seeking Alpha transcript of the event.

US wireless capex is set to expand in 2022 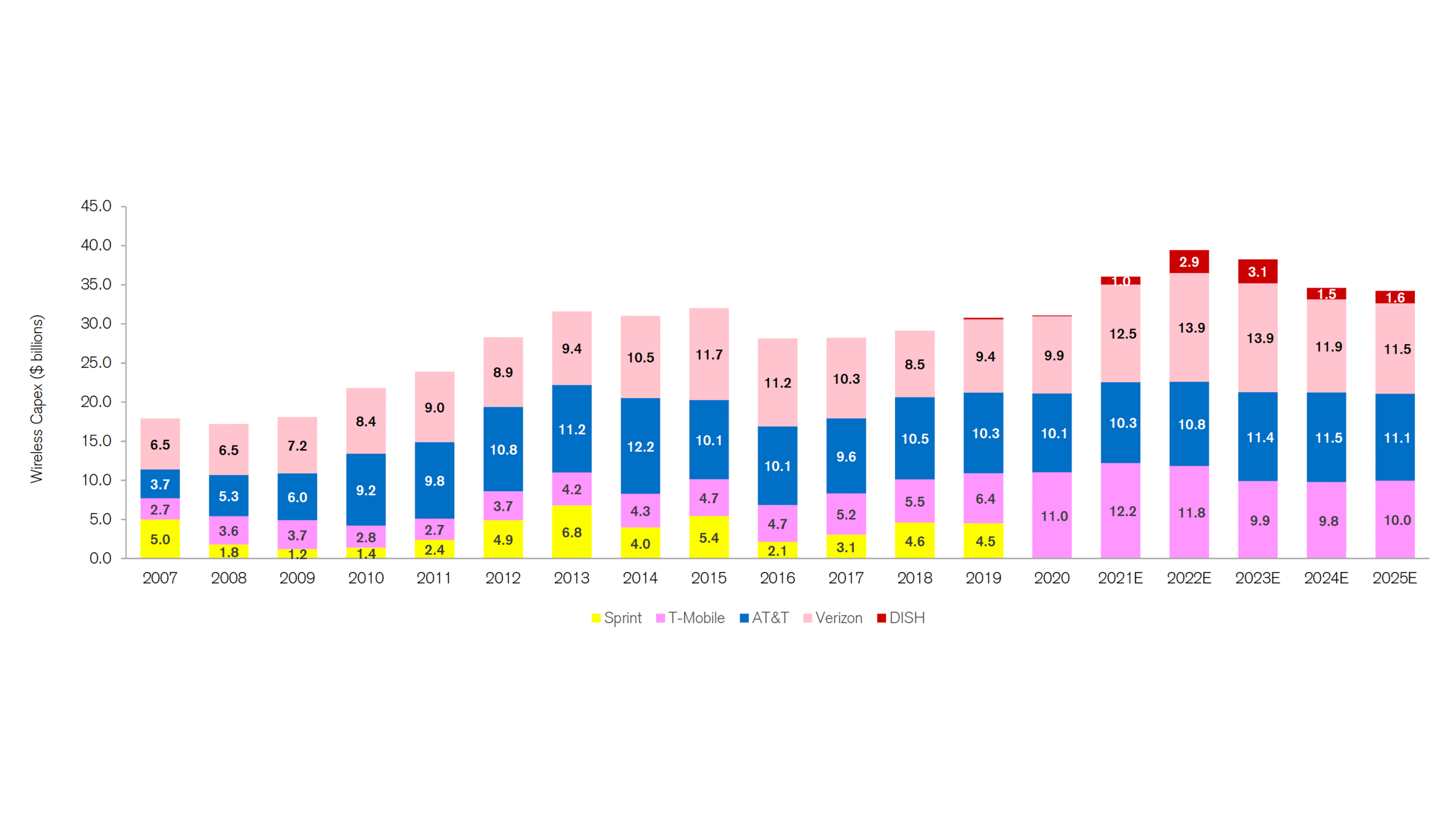 Click here for a larger version of this image.
Credit Suisse financial analysts expect capex in the US wireless industry to reach almost $40 billion across the nation's top mobile operators in 2022. The firm's estimates only cover wireless capex and not fiber spending.
(Source: Credit Suisse, which used company data and Visible Alpha consensus estimates for its figures.)

However, that's where the agreement ends among tower company executives. Where they diverge is in how to invest the money they're making.

Specifically, one company (Crown Castle) is betting on further network densification via small cells in the US, another (American Tower) is betting on a broad shift to data centers, and still another (SBA) is looking toward international markets for further growth.

And each company is touting the success of its plans.

"I'm convinced that this period is one of the most important proof points for the small cell business model," Crown Castle's Brown said of his company's investment into small cells.

Although Crown Castle has come under fire for an early bet on small cells, Brown said the company's recent small cell deals with T-Mobile and Verizon validate its strategy. He said the company currently operates around 55,000 small cells but now has official orders for another 50,000 new ones.

However, the financial analysts at Raymond James pointed out that some of Crown Castle's small cell buildout deals stretch out for the next five years. As a result, "any major inflection in new [small cell] nodes deployed by carriers may still be a few years out," they argued in a recent note to investors.

As Crown Castle doubles down on small cells, American Tower is pursuing data centers. Just a few months ago, the company said it will spend $10.1 billion to buy CoreSite Realty, one of the nation's biggest operators of data centers. The move highlighted the tower company's belief in the potential importance of data centers in general to future telecommunications networks. Indeed, American Tower officials said the most important element of the transaction involves "the convergence of wireline and wireless networks amid accelerating global 5G deployments."

Finally, SBA is essentially working to replicate the model it built in the US in other international markets. For example, CEO Stoops said the company is watching South American spectrum auctions with interest, hoping that operators there will eventually use that spectrum to upgrade to 4G and 5G in the same way they have in the US. SBA owns cell towers in South Africa and a wide range of other international countries.