Europe's regulators have seemed largely oblivious to Cellnex. The Catalonian "towerco" has spent the last few years galloping around Europe and relieving its indebted service providers of the masts on which they hang their basestations. In a region of about half a million towers, Cellnex will own 129,000 in 12 countries once its latest deals are finalized, renting property out to its previous owners.

Then, last month, Italy's competition watchdog caught the unpleasant whiff of market dominance in its nostrils. A planned takeover of European towers owned by CK Hutchison would leave Cellnex with about 70% of the Italian market for leasing, it noted. The third operator of passive infrastructure would effectively disappear, it wrote in its weekly bulletin. Following an earlier deal with Iliad and the latest with CK Hutchison, Cellnex would own around 25,000 towers. Inwit, a joint venture between Telecom Italia and Vodafone, claims 22,000. 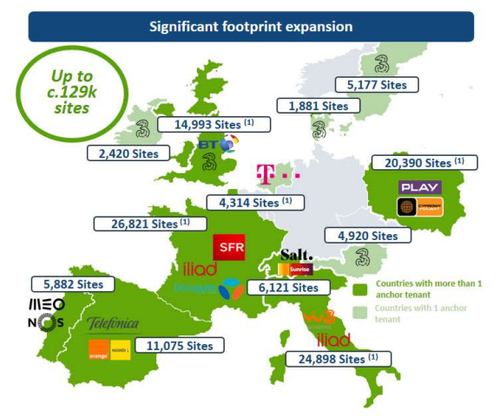 While the tower numbers prompt questions about that 70% figure, what regulators do not seem to have spotted is the possibility that Cellnex mutates into something far more dangerous. It is already evolving. In one of its most recent deals, Cellnex bought about 7,000 towers from a Polish service provider called Cyfrowy Polsat in February. And with that deal came not just the passive infrastructure but a huge quantity of active equipment, including "37,000 radio carriers covering all the bands used by 2G, 3G, 4G and 5G," said Cellnex. Instead of just leasing towers, Cellnex is starting to buy and rent out mobile network equipment.

This effectively makes it an operator, and not just any operator but one that owns about a quarter of Europe's towers, according to some estimates. Cellnex has already flagged plans to spend about 600 million ($725 million) on Polish 5G equipment. Notwithstanding its lack of spectrum, there would be nothing to prevent it from buying 5G gear in other markets, too.

Analysts at Cowen believe this model has caught attention in the US, as Light Reading reported last month. "We're hearing of increasing interest in providing an active/shared RAN [radio access network] solution for carriers where the tower operator owns the radios/antennas and the carrier provides some type of fee for usage on the network," said analysts in a note to investors. "We expect to hear more about this from tower operators as we go forward."

Dish, the company building a fourth mobile network in the US, has also expressed interest. "From an architecture point of view, this is exactly in line with the way we're thinking," Marc Rouanne, Dish's chief network officer, previously told Light Reading. "We can share the investments."

An email to Cellnex's investor relations team, enquiring about its future strategy, was answered as follows: "Our business model remains the same but we are strengthening our industrial proposition and expanding the traditional towerco model." Yet if Cellnex did start to buy and rent 5G basestations as well as towers, it would completely alter the dynamics of the European mobile telecom industry. The ramifications for service providers, equipment makers and regulatory authorities could be huge.

Imagine a vast regional market in which former incumbents no longer buy telecom equipment but effectively operate as mobile virtual network operators (MVNOs), renting capacity from Cellnex and other giant towercos. By and large, Europe would have seen the consolidation of networks that has proven elusive for so many years.

Enormous obstacles clearly stand in the path. If Italy's regulator is suddenly alarmed about Cellnex's towering presence, then other authorities will surely take more interest as well. Europe's telecom incumbents, moreover, may be less comfortable than Dish or other greenfield operators with these arrangements, and they would be unwilling to relinquish spectrum licenses for which they have paid billions.

Ordinarily, spectrum is owned by the company buying active 5G equipment, not the MVNO. Could Cellnex or another towerco operate in a wholesale capacity without its own airwaves? Possibly. Two operators can evidently share basestation equipment but hold separate frequency licenses, as Orange and Vodafone do in Spain. Open RAN, a new concept that attracts service providers, could make it easier to share basestation equipment. Yet a company renting capacity to numerous operators may be forced to invest heavily in radio gear.

The question then is whether Cellnex has the financial muscle or desire to be more than a towerco. Published today, its first-quarter results showed that revenues grew 41% year-on-year, to 506 million ($611 million), on the back of takeover activity, while underlying earnings rose 47%, to 381 million ($460 million). It is forecasting full-year sales of about 2.4 billion ($2.9 billion) and earnings of at least 1.8 billion ($2.2 billion). But its first-quarter net loss widened to 43 million ($52 million), from 30 million ($36 million) last year. And at 8.8 billion ($10.6 billion) in March, its net debt is nearly five times this year's projection for earnings.

Unlike some of Europe's operators, however, Cellnex is worth more than it carries in debt. Its share price in Spain has been on an upward trajectory for most of the last five years, rising from 12.37 in June 2016 to 55.12 in October last year. It has dipped since then but is still worth about 47, valuing the company at 31.9 billion ($38.5 billion), more even than Spain's Telefónica.

Analysts remain captivated by the story. In a research note to investors about Cellnex's latest results, Jefferies wrote: "For an equity under the thumb of interest rate rises and asset yield compression fears, there's nothing here to dispel those fears, but enough here to start an evidence base that life in European towers, and Cellnex therein, will continue unabashed."

Updates: The original version of this story mistakenly said Inwit had 11,000 towers. This has been corrected to 22,000. The story has also been changed to include input from Cellnex.