Mass panic always breeds a few morons. For evidence of the brainless, witness the attack on property owned by a pediatrician after local news stories about pedophiles. Or, more recently, a fall in sales of Corona, a Mexican lager, when a similarly named virus had a thirst-quenching effect.

Conspiracy-theorizing nutters have now drawn a link between coronavirus and 5G. Contrary to informed scientific belief, the virus did not jump from animals to humans, they say, but is actually transmitted by a deadly generation of mobile-phone equipment that operators have switched on like plague-spreading terrorists. News stories about "computer viruses" are perhaps all the evidence they need for establishing a link between technology and disease. And COVID-19 even sounds like a type of malicious software, designed in labs by technicians after 18 less successful attempts to create a pandemic.

Inclined to vandalism, some of these idiots spent a chunk of their weekends torching network sites in the UK. Masts were reportedly set ablaze in several locations, including the cities of Birmingham and Liverpool. On Saturday, during the government's daily afternoon briefing on COVID-19, Michael Gove, the Chancellor of the Duchy of Lancaster, slammed talk of disease-carrying 5G gear as "dangerous nonsense." He might have cited the findings of technical experts  if only he weren't the same man who said "people in this country have had enough of experts" during the now-forgotten Great Brexit Debate of 2016. 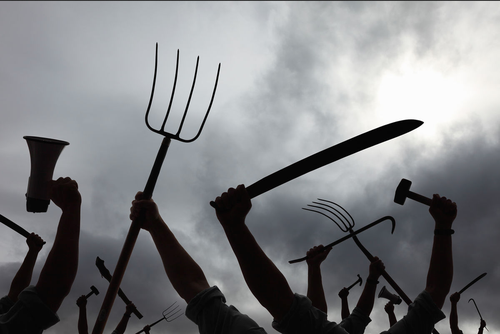 Modern-day 5G arsonists are the equivalent of the witch-drowning medieval lynch mob.

It's possible to see how someone with a deficit of grey cells might confuse pediatrician and pedophile, or Mexican lager and coronavirus. But computer viruses and software-like nomenclature provide a tenuous basis for the intellectually challenged to connect 5G with COVID-19. What appears to have happened is that some of the erroneous health concerns already surrounding mobile technology have permeated imbecilic thinking about COVID-19. Before the virus arrived, the somewhat less irrational fear was that 5G radiofrequency transmissions might be carcinogenic. This endures despite assurances by the World Health Organization that mobile networks use frequencies far too low to be harmful. To your technophobic arsonist, the merest suggestion it can cause cancer means it must be responsible for COVID-19.

The China connection probably doesn't help, either. In the past year, people who had never previously heard of Huawei have been told by parts of the popular press that it's a rogue Chinese firm behind 5G. Is it just a coincidence that China also spawned the worst virus the world has known in about 100 years? Well, yes, it is, actually. But that won't stop conspiracy theorists from seeing coronavirus particles in Huawei's 5G radios.

In the UK, the situation is certainly bad enough for the government to have urged social media companies to crack down aggressively on posts linking COVID-19 to 5G. Internationally, the GSM Association, a trade body that represents mobile operators, has also weighed in. "It is deplorable that critical communications infrastructure is being attacked based on outright mistruths," said Mats Granryd, the GSMA's director general, in a statement. "We urge everyone to trust health authorities and rest assured communications technology is safe. There is no link between 5G and COVID-19."

Full Facts, an independent UK fact-checking charity, has taken the claims seriously enough to be able to crush them with the weight of science. In a Light Reading blog aimed at sane professionals, taking the trouble to expand on the evidence would seem about as valuable a use of time as disproving that pigs shit microprocessors. But perhaps the most important detail the crazies have overlooked is that COVID-19 is now racing through countries where there is not a single 5G mast in commercial service  India being the largest.

Unfortunately, the last thing the industry needs is gangs of torch-wielding technophobes roaming the countryside and burning equipment. As service providers cut spending and governments postpone the licensing of spectrum, 5G has enough problems already. Critics have long argued it does nothing special that 4G can't. Operators will certainly have other priorities now that people are housebound and data traffic is shifting to Wi-Fi and broadband. Sending engineers out to put up 5G boxes meant exposing them to COVID-19 risks; now it means exposing them to potential violence, too.

Worse still, the inexpert vandals cannot distinguish between 5G and older technologies, which means other equipment may have been destroyed, as well. Not equipment used by some early adopters with strange-looking handsets, that is, but gear that's critical in this age of lockdown, when work, Fortnite and Amazon-delivered groceries all depend on telecom. Next time they're ordering pizza online, the vandals might want to think about that.