British TV presenter Eamonn Holmes shares his surname with a certain Victorian super sleuth, but his powers of deduction would not even qualify as what the fictional Sherlock might have called "elementary."

During an on-screen slot about the farcical notion that 5G causes COVID-19, Holmes said he did not accept "mainstream media immediately slapping that down as not true when they don't know it's not true." Before crediting himself as someone with "an inquiring mind," he proceeded to argue that "it's very easy to say it is not true because it suits the state narrative."

The comments have already prompted an assessment by Ofcom, the UK's national regulator, to see if Holmes breached any rules. In the meantime, the presenter has issued a statement distancing himself from some of the views he originally expressed. "Many people are rightly concerned and are looking for answers and that's simply what I was trying to do," he qualified. 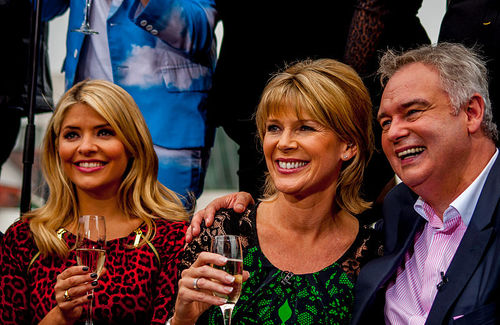 It may have been too late for that. In both the UK and the Netherlands, 5G conspiracy theorists have damaged masts and abused engineers, seeking vindication in the remarks made by mainstream celebrities including Amanda Holden, another British TV personality, and Woody Harrelson, a US actor. Government officials, telecom executives and scientists spent much of last week defending 5G against the baseless claims. Holmes helped to undo their efforts.

In democracies, people should be free to say whatever they want, however ludicrous. They are not free to burn property or attack others doing their jobs. What Holmes said, and what other celebrities have said, cannot really be construed as an incitement to vandalism or violence. But the remarks were irresponsible and may have been a contributing factor.

They also mark a new low in public discourse. Vigorous and intelligent debate is a bedrock of any progressive society and has been since the days of ancient Greece. But the argument about disease-carrying 5G equipment is so dumb it makes conversation during a typical episode of Love Island sound like a showdown between Cicero and Hortensius. As COVID-19 rages, dragging scientists into this "dispute" is a waste of valuable resources.

That wasn't the case when experts were addressing the more rational concern that 5G might be carcinogenic. Then, scientists were needed to show that 5G (just like 4G) operates in spectrum bands that are far too low to cause cancer. They should not have had to disprove that harmful biological organisms zip around on radio waves  like uncontrollable bachelor parties on budget flights  because it is patently not feasible. Linking 5G equipment to a virus is no more sensible than arguing that cars cause volcanic eruptions, that overconsumption of cheese is to blame for unwanted pregnancies or that 4G is responsible for influenza.

Holmes is right to say we shouldn't dismiss an argument because doing so suits the state narrative. We should dismiss it because it is nonsense. But which state narrative was he talking about? The narrative that 5G is a potentially important communications technology that does not spread disease? Does he see a cover-up of global proportions as governments sacrifice lives and economic wellbeing to make 5G a reality? To what end, Eamonn?

Unfortunately, some of the damage is already done. Once out in the world, conspiracy theories, like viruses, can be difficult to kill. For 5G, this one could make life this year even harder than it already was.