Monthly viewership via streaming services and apps surpassed viewing of broadcast TV and cable TV for the first time in July 2022, according to a new monthly study from Nielsen that analyzes how consumers access content across various delivery platforms.

Streaming accounted for 34.8% of viewership, ahead of cable TV (34.4%) and broadcast TV (21.6%). Broadcast TV's share dropped 3.7% on volume in July versus the prior month, and 9.8% versus the year-ago period. Cable TV usage dropped 2% in July versus June, and dropped 8.9% compared to July 2021. Netflix was the top individual service in the streaming category. 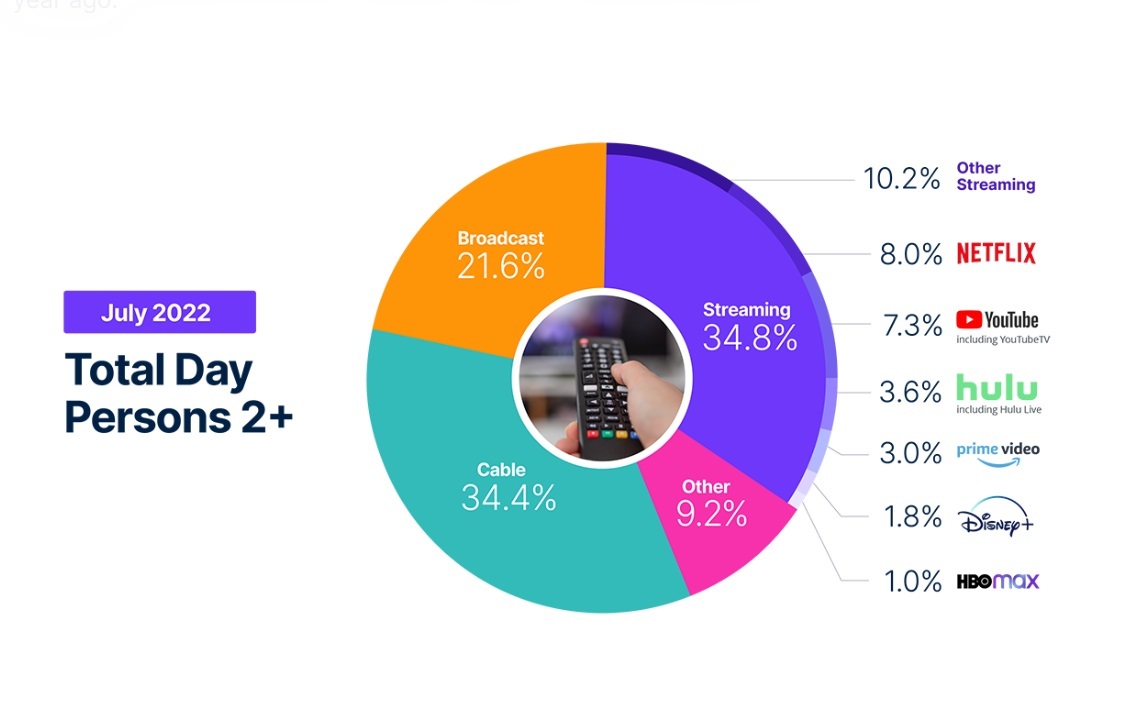 Nielsen's analysis uses data from two separately weighted panels and is combined to create the graphic. Nielsen's streaming data is derived from a subset of streaming meter-enabled TV households within the national TV panel. The linear TV sources (broadcast and cable) as well as total usage are based on viewing from Nielsen's overall TV panel.
Click here for a larger version of this image.
(Source: Nielsen)

Drilled down further, Nielsen said US audiences logged an average of 190.9 billion minutes of streamed content per week in July, surpassing the 169.9 billion minutes watched during the pandemic lockdown period in April 2020.

Amid monthly viewing gains at major streaming services such as Netflix, YouTube, Hulu and Amazon, Nielsen attributed the general trend to a slowdown of new content on "traditional" television as well as reduced access to live sports programming.

That trend has taken shape as media giants continue to funnel their new, original fare to their respective direct-to-consumer (DTC) streaming services.

The trend is also happening as DTC services continue to lock down sports rights deals. Just this week, Paramount Global renewed its US rights to Champions League soccer matches for a reported $1.5 billion over six years, with some of that coverage expected to go to the Paramount+ premium streaming service. That deal reportedly drew interest from Amazon and Apple, streamers that recently have been successful in scoring a range of sports rights deals of their own.