Google Fiber is making progress with the phase-out of Fiber TV, its legacy IPTV service, as it continues to push out free upgrades to the company's own Chromecast with Google TV streaming dongle.

Google Fiber halted the sale of Fiber TV in February 2020, and announced this week it has completed the phase-out in Nashville, Huntsville, Salt Lake City and Provo. Transitions in Raleigh-Durham, Charlotte and Irvine will be wrapped up by the end of September, and the same should be completed in Austin and Atlanta by the end of November.

Google Fiber is fueling the retirement of Fiber TV with a free upgrade offer that includes the streaming device along with a whole-home Wi-Fi upgrade centered by the company's own Google WiFi system. Google Fiber introduced the upgrade program in June. 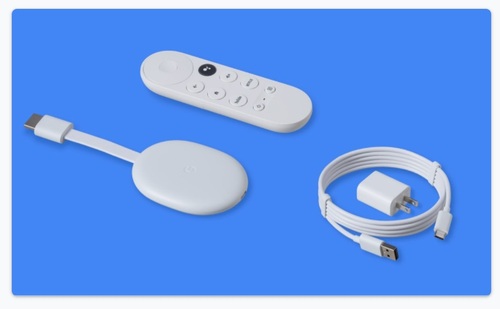 Google Fiber is using its own Chromecast with Google TV streamer to help spur the eventual phase-out of its original Fiber TV service. Google Fiber is offering to replacing all of those older IPTV set-tops with the streaming dongle, which fetches $49.99 at retail.
(Image source: Google)

Google Fiber's upgrade plan paves the way for video customers to replace every Fiber TV box they currently have installed with the 4K-capable Chromecast with Google TV streamer. Google Fiber customers are, of course, free to use other streaming players from the likes of Roku and Amazon, but the service provider is going in-house to fuel its upgrade campaign.

Google launched the Chromecast with Google TV dongle in the fall of 2020, and currently sells it at retail for $49.99. As an upgrade from the original Chromecast, which relied on navigation and content casting from the user's mobile device, the new product is a fully fledged Android TV device that's also equipped with the Google TV navigation system and interface.

As Fiber TV heads toward extinction, Google Fiber is directing those pay-TV customers to a handful of OTT-TV partners that include Google's own YouTube TV service, as well as Philo, Fubo TV and Sling TV.