Evoca TV has kicked off a petition drive at Change.org directed at top execs tied to the Denver Nuggets, Colorado Avalanche, Altitude TV and the Colorado Rockies as part of an effort to drum up support for the financially-troubled pay-TV service.

The petition arrives more than a week after Evoca TV, a service that delivers a slimmed-down pay-TV package in a handful of US markets, warned that it would discontinue operations at the end of 2022 if it's unable to raise more capital. 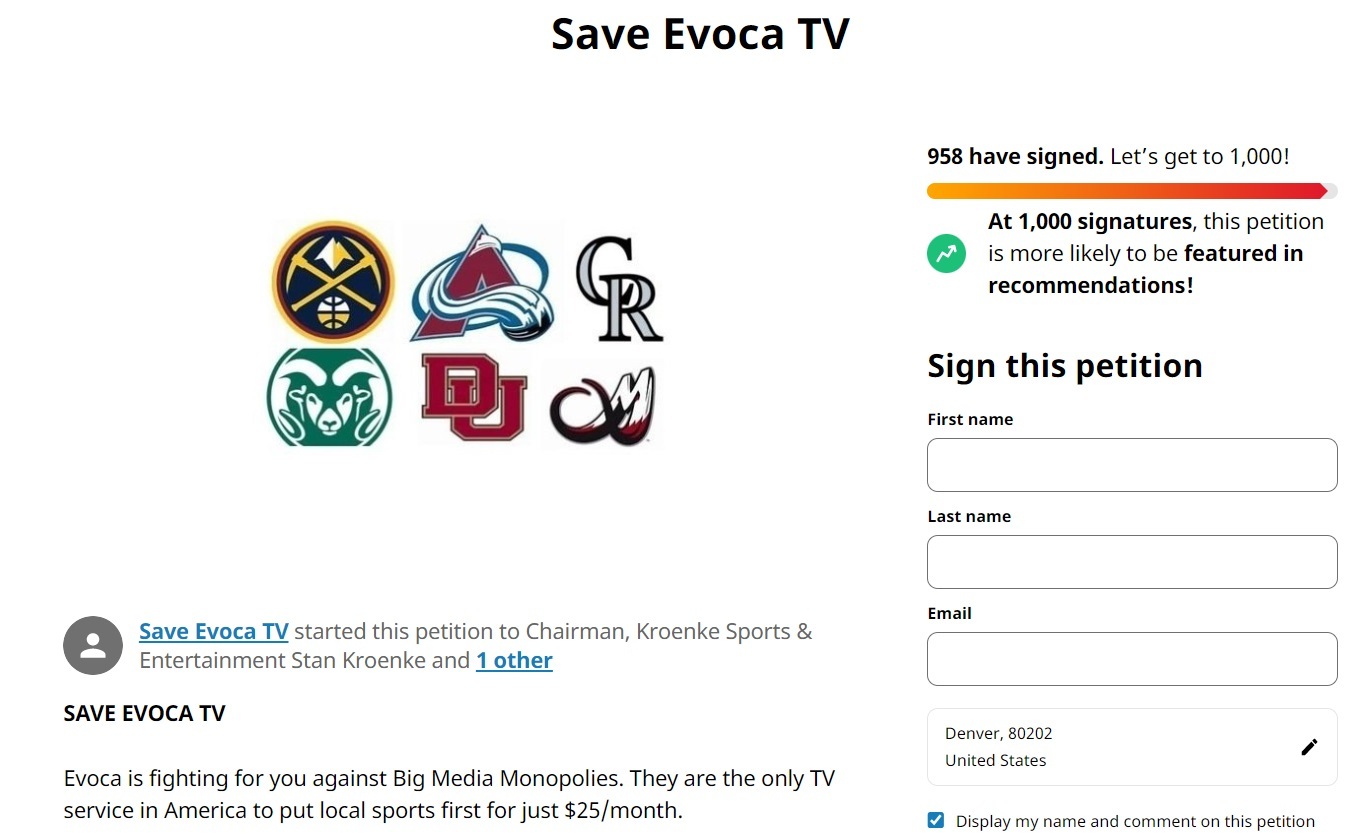 Evoca TV is urging fans and viewers to sign a digital petition at Change.org as the pay-TV service faces a possible shutdown at the end of 2022.
(Source: Change.org)

Evoca TV CEO Todd Achilles told Light Reading last week that the company has "been making good progress on our funding. We feel really good that we're going to get this thing done."

He said Evoca, which has raised about $35 million over the past four years, has been in touch with a group of potential investors that includes broadcasters, content companies, sports media teams, sports team owners and some private equity investors focused on the sports and media market.

That mix of potential financial partners helps to explain why Evoca TV directed a Change.org petition at Monfort and Kroenke.

Evoca TV uses a blend of over-the-air ATSC 3.0 broadcast signals and Internet-delivered streaming to deliver a pay-TV package that starts at $25 per month. The company is one of a small group of providers in the Denver area carrying Altitude TV, a regional sports network that's the TV home of the Denver Nuggets and Colorado Avalanche. The Altitude TV network remains blacked out on Comcast and Dish Network, but DirecTV and FuboTV carry it. Comcast and Altitude TV remain locked in a court battle tied to the carriage impasse.

With a message to help "save Evoca TV," the service provider alerted subscribers to the petition via email on Thursday. "Evoca is fighting for you against Big Media Monopolies," it reads. "Sign this petition and tell your favorite team's owner to support Evoca and keep it on the air so fans always have an affordable, reliable way to watch."

Evoca initially called on viewers and supporters to surpass 1,000 signatures on the petition, a number that would help it secure a spot in Change.org's featured recommendations. At last check, Evoca was nearing 1,500 signatures.

Most of the reasons cited for signing the petition pertain to Evoca TV's carriage of regional sports networks for a price that undercuts other options.

"It is too expensive to watch AltitudeTV on any other platform," wrote one petition signer.

"Evoca TV provides reliable access to the Nuggets, Avalanche, and all the local college sports all in one place for a reasonable price," wrote another.

Yet another signer lamented that she had gone two years without seeing Avalanche and Nuggets games at home before Evoca TV was launched in the Denver area. "Please find a way to keep this option available to thousands of fans who can't afford paying $70-$100 a month," she wrote.