Vimeo Streams in Support for AV1

Vimeo has extended support for AV1, marking some real-world progress for a new bandwidth-efficient, royalty-free video codec. Microsoft, Google, Facebook, Apple, Amazon, Mozilla and many others back the same codec.

After joining the Alliance for Open Media (AOMedia), the group running AV1, last year, Vimeo has shifted into the implementation stage by offering AV1-encoded versions of the Vimeo Staff Picks channel on web browsers. 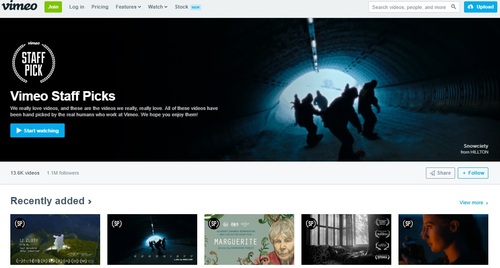 Vimeo currently supports AV1 on its Staff Picks channel and is making plans to extend support to all videos uploaded to its platform.

As part of a collaboration with AOMedia founding company Mozilla, Vimeo said it has also made contributions to rav1e, Mozilla's open source encoder for AV1.

Vimeo said this rollout marks initial support of AV1-encoded content on its free, open video platform, which, the company claims, has more than 90 million "members" spread over 150 countries that use its tools and technology to host, distribute and monetize streaming video.

Vimeo, a company official said, is closely monitoring playback quality-of-experience on its current library of AV1-based content, and expects to invest further in AV1 encoder improvements and "explore new applications in the future," and eventually provide AV1 support for all videos uploaded to Vimeo as well as the company's "Live" offering.

Why this matters
Adoption by Vimeo represents another step in AV1's plan to scale up and become a significant option for video codecs and a rival of sorts to HEVC/H.265. As 4K, virtual reality and other bandwidth-intensive OTT apps and services increase in popularity, AV1 intends to make that content more bandwidth efficient, holding that the codec is 30% more efficient than VP9 and nearly 50% more efficient than H.264/MPEG-4.

AV1 had a splashy debut at the 2018 NAB show. At this year's NAB, Nathan Egge, a senior research engineer at Mozilla, stressed that early implementations of AV1 are still based in software, but that expectations are that first-gen AV1 hardware will surface in 2020.

The Mozilla-Vimeo collaboration also follows the May release of Firefox 67, which includes the royalty-free AV1 video decoder, called "dav1d," with default support on all Firefox desktop platforms.

Mozilla said it had seen a significant rise in AV1 usage on Firefox of late, with 11.8% of video playback in Firefox Beta using the new codec, up from 3% in March 2019 and 0.85% in February.