IBC2018: What MediaKind Did Next

AMSTERDAM -- IBC2018 -- MediaKind might not have been granted its full independence from parent Ericsson just yet, but the video networking and media content management specialist has come to IBC with the bullish attitude of a company that's been let off a leash.

MediaKind is the new name for what was Ericsson Media Solutions (but not including the broadcasting services operation Red Bee Media, which remains an Ericsson subsidiary): The Swedish vendor struck a deal to offload 51% of that unit to One Equity Partners earlier this year and is retaining the other 49%. The deal is not quite completed yet, but it's close. And CEO Angel Ruiz and his team haven't been waiting for the lawyers to pick up their M&A fees before pitching the unit as a leaner, hungrier and more focused outfit than it was at the turn of the year. (See Ericsson Rebadges Media Unit, Eyes Smart Cities, M&A.)

With MediaKind's independence still not sealed, Ruiz still can't discuss financials or reveal quite how much slimmer the unit has become in terms of headcount and operating costs. But he's bullish about the company's potential to make money (rather than lose a small fortune, which it has been doing in recent years), as is Andrew Dunn, the managing director of soon-to-be majority owner One Equity Partners. Beyond having cut costs significantly in the run up to the divestment (no figures available, though), there's no indication from the company as to how the business is going to reverse its financial fortunes.

So at the moment, it can offer only fighting talk: As senior VP of North America Sales Steve Payne told Light Reading, under Ericsson the Media Solutions business was focused on "making money now we're focused on making profitable money."

All involved, though, stress the importance of having Ericsson as a stakeholder and sales channel, particularly as the mobile networking and services sector offers potential new business opportunities, especially as the shift to 5G takes mobile network operators further into the IP networking and cloud platform domains. "The video sector is shifting towards IP-based video and that's different from before," says Dunn. "These guys [Ruiz et al] are ready for that. The opportunity is growing." 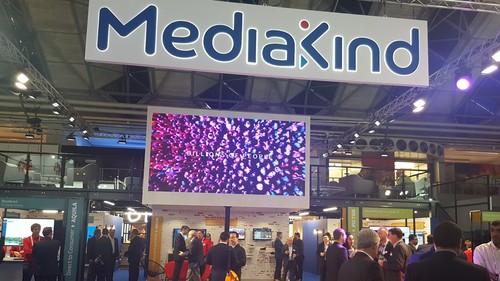 The MediaKind stand at IBC was busy even in the early stages of the show.

So what is MediaKind up to in the final weeks of its life under the Ericsson flag? It didn't make any major new announcements here, but provided some updates on where it's focusing its efforts: