US Pay-TV Subs Erode at Record Pace in Q1

The US pay-TV industry took another big hit in Q1 2019, as "traditional" video providers combined to lose a record 1.4 million subscribers, equating to a 4.8% loss on a year-over-year basis, according to MoffettNathanson's latest "Cord-Cutting Monitor" report.

Those losses of 1.4 million subs among traditional pay-TV providers (cable, satellite and telco TV) compared to a year-ago loss of 808,000 subs. 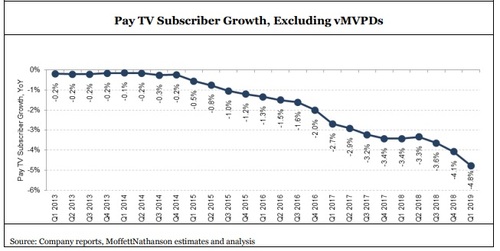 Virtual MVPDs (a group that includes DirecTV Now, Sling TV, Hulu, YouTube TV, Philo and fuboTV, among others) are losing steam -- the report estimated that they collectively added 563,000 subs in Q1 2019, off from a gain of 722,000 a year earlier.

MoffettNathanson analyst Craig Moffett surmised that the conversion rate for those vMVPDs (the rate at which they recapture fleeing traditional pay-TV subs) has fallen sharply. Just 40% of the 1.4 million traditional subscriptions lost in Q1 were converted to OTT-TV providers, compared to 59% over the last 12 months, and versus 89.4% in the year-ago quarter, according to report data.

He said several factors contributed to the fall-off of conversion rates, including password sharing, a resurgence in use of over-the-air broadcast TV antennas and a growing belief that some demographics (especially among consumers who aren't sports fans) are finding that subscription VoD services like Netflix are sufficient to suit their needs.

By Moffett's estimates, US virtual MVPDs ended Q1 with almost 8 million subscribers, still a minority subset of the 20 million or so cord-cutter/cord-never households in the US. 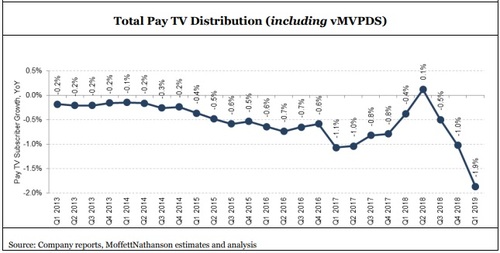 Situation expected to worsen
If the pay-TV industry is looking for a bottom, it will need to keep searching. "There's every reason to believe that things will only get worse," Moffett wrote.

He said it's becoming evident that cable operators are now less inclined to defend the "status quo" -- meaning that some MSOs will stop defending their video base but not abandon pay-TV altogether -- causing traditional MVPD sub losses to accelerate further. A prime example among publicly traded US cable operators that have veered from that status quo is Cable One, which has de-emphasized pay-TV in favor of its higher-margin broadband offerings.

"Cable operators are increasingly indifferent to video retention, and the wheels are rapidly falling off satellite TV," Moffett wrote.

Against this trend, programmers will be forced to raise rates to pick up the slack, and that will only exacerbate the decline of pay-TV subscribers, he added.

Virtual MVPDs, meanwhile, have recently jacked up their pricing as well, which could slow subscriber growth among that group even further in Q2 2019, Moffett predicted.

These broader pay-TV trends are also forcing studios and programmers to dive more deeply into direct-to-consumer offerings. Moffett views Disney's coming subscription OTT offering, Disney+, as a "lifeboat" for The Mouse to board should the status quo continue to deteriorate.

"With Q1 cord-cutting results now in the books, it may still be too early to abandon ship but it's not too early to put on the lifejackets," Moffett wrote.