After missing its early window to launch a rebranded home pay-TV offering by late 2018, T-Mobile now expects to introduce it sometime in the first half of 2019.

T-Mobile US Inc. has not announced an exact launch date. But, speaking on the company's fourth-quarter earnings call this morning, T-Mobile President and COO Mike Sievert said the company decided to hold off on the debut so it could develop some new features and "quality improvements" before rolling out the new, rebranded product. (See T-Mobile Dumps Plan to Debut New OTT-TV Service in 2018  Report .)

"We're not date-driven when it comes to the home part of the strategy," Sievert said. "We're quality driven." 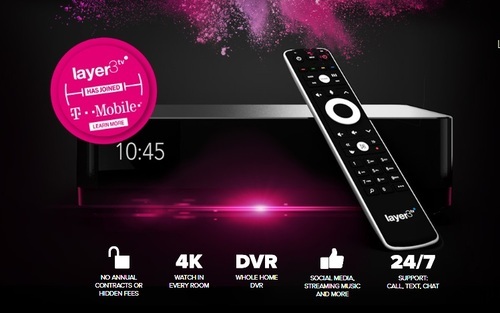 T-Mobile plans to introduce a rebranded and 'reimagined' version of its home pay-TV product in 1H 2019, and in more markets than the handful that Layer3 TV has service available today.

T-Mobile, Sievert said, expects to introduce a "redefined and rebranded product to many, many more places across the country in the first half of this year."

Sievert stressed that T-Mobile's home TV service will be "highly tied" to a wireless-powered home broadband product that is still in development.

He also said that those two elements can operate independently of each other, "but they really operate well in concert in our future plans."

Sievert also dropped word that T-Mobile plans to start piloting a home broadband service, initially using 4G/LTE and later 5G, in the first half of 2019.

Though T-Mobile will initially run the home broadband service separately, "don't get confused by that because the ultimate strategy is for these -- home TV and home broadband -- to be a blended go-to-market approach," Sievert said.

Light Reading will have a lot more on this development later today.

The other prong of T-Mobile's video strategy will focus on mobile. The company has not detailed everything it has in mind there yet, but it sounds like T-Mobile will position itself more as a content aggregator/bundler on the mobile side of the video spectrum. (See T-Mobile, Xumo Teaming on 'Snackable' Video App for Metro Prepaid Service .)

"We believe that there's a space for us here," Sievert said with respect to the mobile video sector. But he also acknowledged that the sector is crowded, and that T-Mobile has no plans to come out with an "undifferentiated" skinny TV bundle.

"There are plenty of those  It's subscription-palooza out there," he said. "Every single brand has or is developing an OTT solution."

He sees T-Mobile taking a more "nuanced role" in mobile video, enabling customers to get access to various brands and services and piecing them together. "Most of the fun starts this year," Sievert said.

T-Mobile on cable's mobile moves: Meh
Speaking on the earnings call, T-Mobile CEO John Legere also weighed in on mobile competition from Comcast Corp. (Nasdaq: CMCSA, CMCSK) and Charter Communications Inc. , which both have MVNO deals with Verizon Wireless and ended 2018 with a combined mobile sub base of about 1.35 million. (See Charter CEO: 'Spectrum Mobile Is Ramping Up' and Comcast Pushes Past 1.2M Mobile Subscriber Lines.)

He said those moves are disruptive to the industry, but questioned how they'll be able to become a true competitive force due to the high costs they are paying to be part of that mix.

"The cable players are aggressively coming into the wireless space," Legere said. "But so far aggressively means  that they're spending massive amounts of money with negative cash flow and negative EBIDTA to attain small amounts of customers."

Both Comcast and Charter have acknowledged that their mobile efforts will run at a loss in these early phases. But they remain confident that they will be able to scale up and turn them into businesses that can stand alone on an economic basis.