The study -- based on a blend of company data, Evercore ISI research and info from app data specialist SensorTower -- appears to fit a broader trend -- the popularity of binge-style SVoD services is on the rise as consumer adoption of vMVPD services shows signs of slowing amid a string of recent price hikes.

Virtual MVPD download activity slowed "meaningfully" in Q2 among the top five platforms studied in the US (Sling TV, DirecTV Now, PlayStation Vue, YouTube TV and fuboTV), together accounting for about 3.2 million downloads from Apple's and Google's app stores. That was a 34% year-on-year decline, and a 17% drop from Q1, Jayant found. 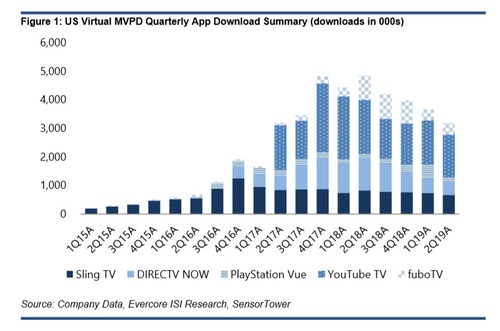 Within that category, DirecTV Now, the AT&T-owned OTT-TV service, saw a sharp drop -- accounting for 15% of app downloads in Q2, compared to a 25% share in the year-ago period.

The overall slowdown in the vMVPD app category also reflects recent subscriber trends. OTT-TV service providers have not yet released Q2 subscriber totals, but virtual MVPD sub adds in Q1 2019 fell to 563,000, compared to about 722,000 in the year-ago period, according to MoffettNathanson estimates.

Meanwhile, standalone SVoD apps had a banner Q2, aided by HBO Now and the final season of its hit series, Game of Thrones. Across the six largest standalone SVoD services studied (Netflix, Hulu, Amazon Prime Video, HBO Now, Showtime and Starz), downloads jumped 15% year-on-year, to 16.1 million. HBO Now saw app downloads rise to 3 million in Q2, up from 1.1 million in the prior-year period, the study found. The laggards in the SVoD group included Netflix (down 2% year-on-year) and Starz (down 27%). 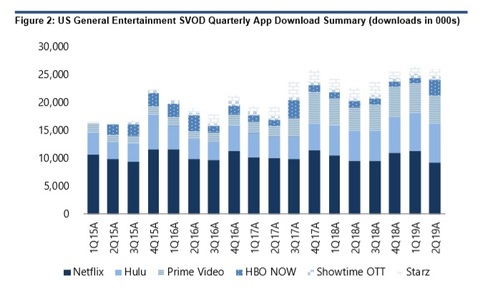 The SVoD app download trends are likely viewed as welcome signs to The Walt Disney Company, AT&T/WarnerMedia, NBCUniversal and Apple, which all have direct-to-consumer subscription streaming services set to launch later this year or sometime in 2020.

Also enjoying download growth is the free, ad-based VoD category. Total AVoD downloads in the US surged 72% in the first half of 2019, the study found.

"Pluto TV and Tubi TV have experienced some of the most robust download growth of all apps we track, and we are beginning to pay closer attention to the ad-supported segment of the TV universe," Jayant noted. 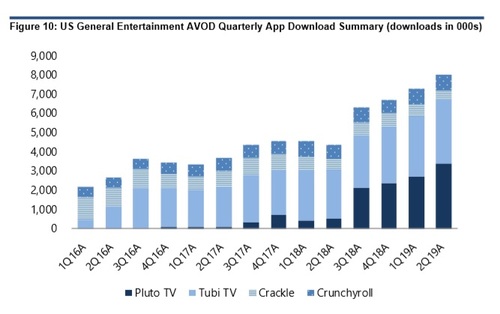