The rabbit hole of Omniverse One World Television continues to wind and weave itself into some weird, strange and interesting places. Is one of those places DirecTV?

Recent evidence seems to suggest that there's a linkage between Omniverse and DirecTV somewhere along the chain, and that the specifics of this situation are occurring unbeknownst to the satellite TV service provider.

As a quick recap, Omniverse is under attack by the Alliance for Creativity and Entertainment (ACE), a legal consortium backed by several major US programmers, studios and OTT video providers. ACE recently fired a suit at Omniverse alleging that the company is violating copyright rules by distributing TV channels and other content to a wide range of partners that offer relatively cheap OTT-delivered pay-TV services "powered" by Omniverse. Examples of those services include TikiLive, VivaLiveTV, Flixon, SkyStream, Clikia and Silicon Dust's HDHomeRun Premium TV offering.

The lawsuit alleges that Omniverse is serving as the "hub," while the OTT-TV services represent the "spokes" in this allegedly illegal arrangement. (See Big Programmers & Studios Bring Hammer Down on Omniverse and What Is Comcast Doing With VivaLiveTV? )

A vexing question not answered in the ACE complaint is Omniverse's specific role as the hub. Where is it sourcing its video feeds from, and what kind of distribution rights does it have, or believes it has? ACE has been asked if it can offer further detail about this part of the allegations.

In the wake of the ACE-led lawsuit, Kansas City, Mo.-based Omniverse issued a statement that it "disagrees with the substance and the specifics" of the complaint, and that it "intends to engage quickly and constructively with the plaintiffs and their legal counsel to resolve their concerns with Omniverse's business... It is our belief that when this process is complete, that both sides will be satisfied with the outcome." But Omniverse didn't spell out how it sources its content and what distribution rights it believes it has. We've reached out to Omniverse's lawyers to get some additional answers, but they have not returned multiple phone calls. (See Omniverse Will 'Engage Quickly' to Resolve ACE-Led Copyright Allegations .)

Per some reporting by Cord Cutter News in October 2018, Omniverse CEO Jason DeMeo claimed to have some kind of magical rights deal that enables Omniverse to sub-lease those rights to its various OTT-TV partners. DeMeo, the report added, acknowledged then that Omniverse had received cease and desist notices, but they were dropped and never reached the courts after Omniverse presented the contract in question.

DeMeo wouldn't provide the online pub with any specific details about the contract, but claimed that there are two others like it in the US that he was pursuing, and feared that providing any more info might enable others to figure out how to track them down. Not only does that sound strange and implausible, but, given the ACE-led lawsuit, it's also clear that there are programmers, studios and other content-owners that strongly disagree with what DeMeo appears to be asserting. And if its existing claims on that crazy-sounding license are legitimate, one would think Omniverse could simply present this to ACE and rapidly resolve the legal issue hanging over its head.

Is Omniverse linked to a 'bulk' TV deal somewhere in the chain?
I've been asking around about Omniverse in recent weeks in an attempt to figure out where it is sourcing its TV feeds. Based on the information I've received and dug up so far, the working theory is that Omniverse is basing itself on some sort of MDU (multiple-dwelling unit) bulk video deal that comes way of a satellite TV provider or an affiliate of a satellite provider that would normally be used to deliver TV services to apartment buildings, college campuses or some other type of MDU.

Based on that theory, it would follow that Omniverse has created a headend of sorts that converts bulk TV signals into OTT streams that are relayed to Omnivere's pay-TV service partners further downstream (like SkyStream or VivaLiveTV), which then repackage them into the individual offerings that they end up marketing and selling. If that's the case, it's also very likely that if the video is coming the way of a satellite TV provider, that the satellite operator is unaware that its video feeds are being used and distributed in this manner.

Another source familiar with Omniverse told me that DeMeo claimed several years ago to have acquired the programming rights for its older Omnibox service (the company once tried to sell a direct-to-consumer OTT-TV service via its own branded streaming device) through Dish TV agreements, with Omniverse using those rights as a third party. I asked Dish about that and they denied that they have anything to do with Omniverse.

But if Omniverse has somehow attached itself to a bulk video contract somewhere down the line, it could explain why its OTT-TV partners are able to sell big packages of TV services at relatively low prices.

For example, TikiLive, one of Omniverse's partners, sells a Premium package of almost 80 channels, including feeds from ABC, CBS, Fox, NBC, FX and ESPN (the most expensive national cable channel in the US), for just $29.99 a month. Among other examples, Clikia's Cable Stream package fetches $31.95 per month for a lineup of 64 channels, and SkyStream has a Premium+ offering for $65 per month with 70-plus live channels, support for up to five simultaneous streams, a 50-hour DVR, and premium networks that include HBO, Cinemax and Showtime. SkyStream even has a grid to show how its service stacks up against competitive virtual MVPD services: 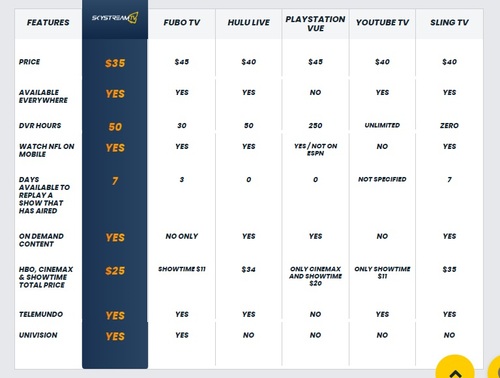 Multiple people familiar with the economics of bulk TV agreements note that such deals are built on wholesale pricing that is somewhere between 40% to 60% less than what consumers would pay if they were getting service directly from a pay-TV provider. The wholesale/bulk rate is lower because it's based on delivering service to 100% of the units in the MDU (video usually is baked into the rent). The margins on the bulk rate pricing are also aided by the fact that there are fewer operational expenses involved -- for instance, there are no truck rolls, no billing, no collections on bad debt headaches to grapple with, and no (or very little) marketing.

"You're paying a smaller license fee, but it's based on 100% occupancy," a source familiar with bulk video agreements explained.

And if there is some sort of bulk video angle occurring in the Omniverse scenario, that might remind some of the competitive challenges the cable industry once faced from a group of unscrupulous SMATV (satellite-master-antenna TV) operators that served a pocket of the MDU market. There was a time when certain SMATV operators -- typically comprised of small mom-and-pop apartment building owners looking to make a few extra bucks -- would buy one satellite TV subscription and connect the receiver to a mini-headend that would serve video to each of their tenants. In turn, the apartment manager would pocket additional video-related fees from each of their individual renters. It wasn't a pervasive thing, but the problem became sizable enough that the satellite TV providers eventually stepped in to clean that up.

briansoloducha 3/5/2019 | 3:25:33 PM
Re: To come; More from Omniverse's side Thank you for this reporting. I find it very very intriguing.
Reply | Post Message | MESSAGES LIST | START A BOARD

Jeff Baumgartner 3/4/2019 | 6:02:19 PM
To come; More from Omniverse's side Jason DeMeo, CEO of Omniverse, reached out to me today and had quite a bit to say. We'll have a lot more to share from his point of view on this situation soon. One thing I will note is that he says Omniverse does have a joint venture with a private cable company that, he says, has a long-term bulke-style video deal with DirecTV.  He is also steadfast in the position that Omniverse is doing everything legal per the terms of the contract. More to come... JB
Reply | Post Message | MESSAGES LIST | START A BOARD
EDUCATIONAL RESOURCES
sponsor supplied content
High Performance Video Transcoding on ADLINK AdvancedTCA Processor Blades with Intel Media SDK
Educational Resources Archive
More Blogs from The Bauminator
Kimberly Maki lends SCTE a helping hand