Apple placed its new, big bet on video Monday, announcing a new version of its TV app that will aggregate and curate OTT subscription services from a wide range of sources, and the teasing of a streaming subscription service that will debut this fall and feature a slate of original series and shows.

Apple TV Channels, announced at Monday's event from the Steve Jobs Theater in Cupertino, is an à la carte-esque collection of streaming apps from individual services from CBS (CBS All Access), Showtime, CuriosityStream, HBO, Starz and Hulu... but not Netflix. That will complement the Apple TV app's integration with MVPD services from Charter Communications, DirecTV, Altice USA, PlayStation Vue and Hulu. 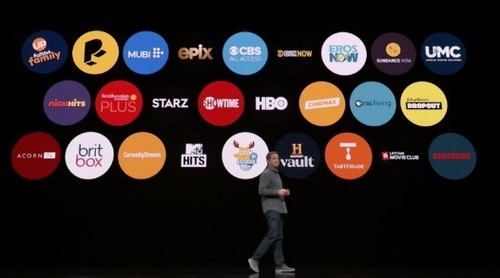 Decked out in an untucked shirt and sneakers, the Apple-ization of former TWC exec Peter Stern is now complete.

"For some of us, the big bundle is more than we need ... This is how TV should work," declared Peter Stern, the former Time Warner Cable exec who now heads up Apple's video, news, books, iCloud and ad services.

Apple's big focus here is on reducing the friction around subscribing to and paying for a multitude of individual OTT services under a redesigned, all-seeing/all-knowing app that can also serve up recommendations and suggestions on what to watch next, using a mix of editors and machine learning technologies.

"No more bouncing from app to app," Stern said, announcing that the updated TV app will be out in May and will eventually be offered in more than 100 countries (versus just ten today for the current version of the app).

Of course, the general idea, which will help Apple get a bigger bite of subscription revenues through its own app store, is not all that novel or new. Similar approaches are being taken by Amazon Channels (the SVoD aggregation service from Amazon Prime) and The Roku Channel, a curated offering from Roku that features both free, ad-supported content and tight integrations with dozens of subscription-based OTT services. Comcast, meanwhile, is nearing the debut of "Xfinity Flex," a video streaming platform/product targeted to broadband-only customers that will cost an additional $5 per month, and provide a way for users to upgrade to pay-TV packages. (See Comcast Targets 'Xfinity Flex' at Broadband-Only Subs.)

In another big move, the new Apple TV app will expand beyond the company's own device ecosystem, as it will launch on Samsung smart TVs this spring. It will follow on connected TVs from LG Electronics, Sony and Vizio, and develop versions for Roku players and Roku TVs as well as Amazon Fire TV devices.

Apple is expanding outside the Apple-sphere also to support Apple TV+, a subscription streaming service coming this fall that will feature a library of new original productions. Pricing and availability for Apple TV+ will be announced this fall, the company said.

Some big names are getting behind the Apple TV+ effort: Steven Spielberg (a new batch of Amazing Stories); Reese Witherspoon and Jennifer Aniston are teaming on The Morning Show, with Steve Carell to be part of the ensemble; Jason Mamoa and Alfre Woodard (for a show called See); Kumail Nanjiani (Little America, an anthology series of true stories about US immigrants); a show for preschoolers with the makers of Sesame Street; and Little Voice, a show from JJ Abrams and singer/musician Sara Bareilles. Oprah Winfrey is also on board for two documentaries. 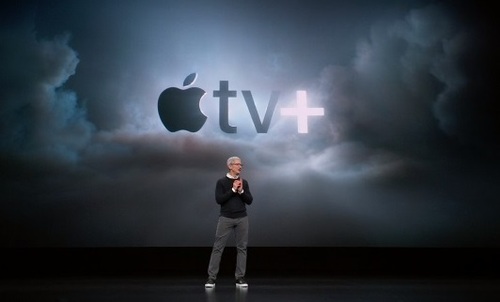 Apple is prepared to shell out more than $2 billion annually on original shows, according to BTIG projections. That's a nice chunk of change, but still trails the $10 billion Netflix is expected to spend on content this year.

But will this big bet pay off? Morgan Stanley reportedly forecasts that a media package from Apple that bakes in video and music could pull in about $22 billion in sales by 2025.

Apple's new video strategies and services were the bigger announcements among several that focused on Apple's move to enhance and expand its services businesses, with lots of special attention on security and privacy, as sales of products like the iPhone flag:

"This represents a landmark moment for Apple with a major event solely focussed on services," Paolo Pescatore, tech, media and telco analyst with PP Foresight, said in emailed comments. "It underlines a growing and strong focus on services as a future source of revenue growth. In essence Apple is seeking to become a Netflix of everything in services; music, news and magazines, video and games."