Driven by more cord-cutting and the rising popularity of entertainment-focused subscription VoD services, the US pay-TV industry lost another 1.2 million customers in Q3 2019, eroding the base by about 3.4% versus the year-ago period, MoffettNathanson estimated in its latest Cord-Cutting Monitor report. 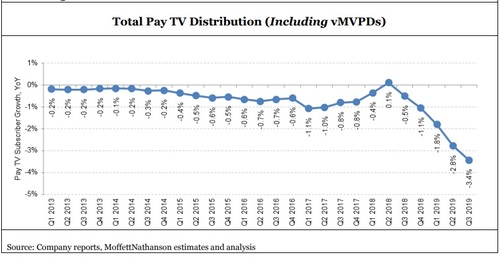 Those losses included subscriber gains from OTT-delivered virtual multichannel programming video distributors (vMVPDs), such as YouTube TV, Hulu, Philo and Sling TV. When those vMVPDs are removed from the equation, the remaining traditional pay-TV providers (cable, satellite and telco) combined to shed 1.8 million customers in Q3, leading to a sub loss of 6.2% from a year earlier. 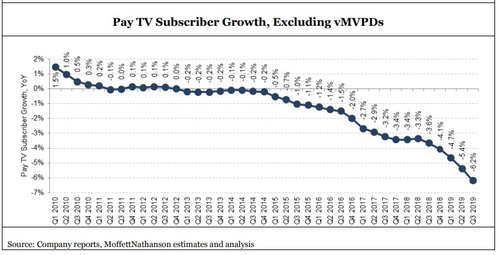 Severe losses at DirecTV in the quarter also played a major role in widening the gap between cable and satellite TV subscriber losses -- cable was down 2.8% in Q3 compared to -12% for satellite.

Meanwhile, sub gains among virtual MVPDs once again were not strong enough to make up the difference. Based on estimates and publicly reported numbers, MoffettNathanson said those OTT-TV service providers tacked on 585,000 subs in Q3, a small jump from 529,000 gains a year earlier, ending the period with 8.94 million subs.

The market analyst firm estimates that the conversion rate of virtual MVPDs -- their ability to capture subs leaving traditional pay-TV providers -- has fallen to about 40% over the past 12 months. "Unfortunately, customers are not leaving linear TV for vMVPDs. They are simply leaving live TV altogether," MoffettNathanson Analyst Craig Moffett writes in the report. He blames that trend partly on the rising popularity of entertainment-focused, direct-to-consumer SVoD and free, ad-supported streaming services that are increasingly taking the place of linear TV networks with similar types of programming and content.

Live, entertainment TV suffering as on-demand services surge
While it's an overstatement to call live TV "dead" yet, it's certainly not healthy, Moffett explained. "The vMVPD model that simply reproduces the familiar cable network model online isn't proving to be the answer customers were looking for," he wrote. "What IS dead, or at least rapidly dying, is live entertainment. The live TV model for entertainment programming is being displaced by SVOD and AVOD much more rapidly than the cord-cutting numbers alone would suggest. The long-awaited bifurcation between live (sports and news) and on-demand (entertainment) is gathering momentum."

Moffett estimates that nearly 24 million US households have either cut the cord or have never taken a traditional pay-TV service since 2010, the year that pay-TV subscriber growth dropped below new household formation. Of that total, about 9 million have gone with an alternative virtual MVPD, leaving about 15 million US households that have abandoned live TV or at least are not paying for a live TV service, the analyst said.