As Disney, Apple, WarnerMedia and NBCU prepare to launch subscription streaming services, much of the discussion has centered on the battle for subscribers as they threaten the turf held by Netflix, Hulu and Amazon Prime Video.

While new services outfitted with exclusive originals will certainly be part of the draw, the bigger battle will likely center on the pocketbook, and the entertainment dollars that consumers are willing to shell out for this expanding mix of OTT services.

That's, of course, a finite total for most consumers, and an amount that will be fiercely fought for by the OTT incumbents and newcomers.

But the sheer number of streaming services are "overwhelming" many US consumers and causing them to grapple with "subscription overload," according to Amdocs's "2019 Subscription Management Report," based on a survey of 1,000 US consumers.

While many people are willing to pay top dollar for these subscriptions, just 27% spent more than $100 per month on subscription services, the study found.

"Enticing them to spend more on subscriptions will be the difficult part, particularly for established players," added Amdocs, which got closer to the content side of the services game via its acquisition of Vubiquity in early 2018. "The data revealed that media and communications companies must offer more than competitive pricing to retain and attract new subscribers."

More than a third of US consumers surveyed (37%) listed price as the top reason for changing platforms. However, relatively low price points still might be enough to move the needle, as 59% of study respondents said they are presently happy with their current subscriptions and aren't looking to change. 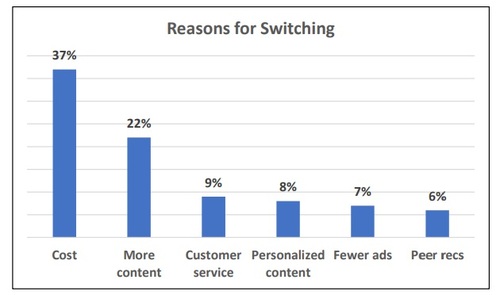 Among issues outside the spending sphere, the study found that about one-third of respondents viewed remembering passwords to multiple streaming service accounts as their biggest pain point. But 39% also said a platform that bundles together all of those services, backed by a single sign-on system, would help to ease that pain.

While that seems to fly in the face of consumer desire for à la carte, this apparent need for a technical bundling of the platform, billing and authentication system could likewise serve as good news for OTT and pay-TV players alike. Companies on both sides of that equation have already created ways for consumers to subscribe to multiple streaming services through a single device and billing platform.

On the OTT side, Apple (Apple TV Channels), Amazon (Amazon Channels) and Roku (The Roku Channel) have already solved for this. Among examples on the pay-TV end, Comcast has integrated several popular subscription streaming services on its X1 pay-TV platform as well as Xfinity Flex, a streaming/smart home product targeted to broadband-only subs (plus a coming option to upgrade to a full pay-TV service).

ianpundt 2/6/2020 | 1:49:17 AM
Re: Great Data Yes, in 2019 we already saw them increase by 50% yet in society there is not really much of a difference, employees from  were asked about this issue and there are a lot of negative comments surrounding this issue
Reply | Post Message | MESSAGES LIST | START A BOARD

JohnnyBells5000 12/22/2019 | 9:50:54 PM
Great Data I agree what these subscriptions are going to increase over time. In 2019 we already saw them increase by 50%! The question is, will there be organizations established to look at sudden increases and act as 'whistleblowers'? So far, it seems this is not being done. For instance, there was an influx of personal trainers in Guelph who had this issue, but their services were not considered. Anyways, we will see what happens in 2020.
Reply | Post Message | MESSAGES LIST | START A BOARD