Facebook Flexes Its Video Muscle With Launch of 'Watch'

Facebook has announced the launch of Watch, a new 'channel' dedicated to video shows on the social network. It will be available across multiple devices -- mobile, computers, TV apps -- and will comprise multiple episodic shows (recorded and live).

Facebook announced the launch of the service, which will be made available soon to a limited number of users, via a post on its site Wednesday. The author of the post, Daniel Danker, Facebook's Director of Product, said that while users liked the "serendipity of discovering videos in News Feed," he felt they also wanted a dedicated place for video. That led the team to launch a video Tab for US users last year: Watch is designed to expand and improve that experience. 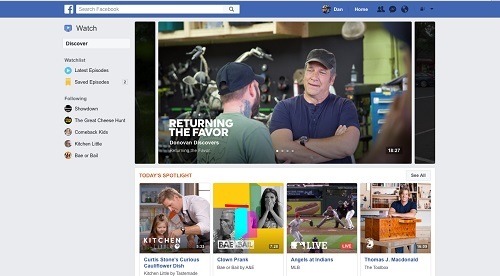 Watch will be personalized and will have a "Watchlist" to remind users of shows waiting to be seen. It will list shows friends are watching, shows that spur the most comments and discussions, and the shows that make people laugh (i.e., that get the most "Ha Ha" comments). It also allows users to add and view comments, connect with friends directly while watching shows and join dedicated Facebook Groups for a particular show.

Danker also identified a few formats he thought would be well-suited to the nature of the video service. The first genre he listed was shows that engage with communities, citing Nas Daily, which is created along with fans of the show's producer. Other examples cited include: A motivational speaker who answers questions in real time; a show that instructs children how to cook a dish and then has them teach professional chefs; and a game per week from Major League Baseball (MLB).

Facebook has already funded some shows to demonstrate the community-oriented type of content that it believes will be successful on its platform. It's CEO, Mark Zuckerberg, has repeatedly talked about the importance of video to the social network's future strategy. (See Video Bigger Business Driver Than Messenger – Zuckerberg.)

In a post on Facebook yesterday, he noted: "We believe it's possible to rethink a lot of experiences through the lens of building community -- including watching video. Watching a show doesn't have to be passive. It can be a chance to share an experience and bring people together who care about the same things."

It makes sense for Facebook to try and create a new form of video entertainment, given the staggering quantity and variety now available across pay-TV, YouTube and the various subscription VoD services. And it's logical to try and take advantage of its huge base of 2 billion-plus monthly active users by linking interaction, discussion and "community" elements to the video experience.

Still, Facebook is optimistic it can attract that kind of content as well. It's looking for more deals with major content providers such as the MLB as well as encouraging content creators and publishers to use its platform. While revenue shares and pricing have not been disclosed by the company, a report on TechCrunch states that content creators will receive 55% of ad revenue generated on their content, while Facebook keeps the rest.

The service is due to launch today, but only to a limited audience. The service will be launched across the US in coming weeks, and approximately 40 shows will be debuted to the broader audience on 28 August, according to sources quoted in a Business Insider report.

Given the size of Facebook's staggering user base, anything it does is likely to have an impact. But at the same time, there's a lot of video services out there. A straightforward Netflix-like strategy is unlikely to work for the company, so it does need to look at a different way to approach the market, even if the eventual goal is to become the primary source of all video entertainment across genres.

The key to the social network's success with video is how well it does two things: Firstly, whether it can develop the right content for the niche it is targeting, this "community-led" video experience, that combines high-quality production with comments, discussions and interaction; and secondly, whether it can integrate that content effectively with the user-generated content it offers via live streaming and news feed posts.

If it's able to engage viewers across both formats, then it should be possible to monetize those experiences. And it will provide a very strong foundation for the social network to then expand to more traditional, longer-form genres of content, such as TV shows and movies, taking on both pay-TV providers and the OTT heavyweights such as Netflix and Amazon.

kq4ym 8/23/2017 | 5:08:53 PM
Re: Watch out! As noted, " it's logical to try and take advantage of its huge base of 2 billion-plus monthly active users." While there obviously lots of eyeballs out there on the platform, I would guess there's probably going to be less "interactivity" than Facebook might want, but there will be lots of folks just merely curious or bored that will watch millions of hours of video there.
Reply | Post Message | MESSAGES LIST | START A BOARD

242ak 8/14/2017 | 7:50:18 AM
Re: Watch out! Yes, definitely more of a threat to YouTube than Netflix. And Snapchat more than either, I suspect. I think FB is genuinely trying to find the right kind of video content to suit the nature of its platform, so more inherently social, interaction-oriented and maybe even individual-centric. Snapchat is probably the closest in terms of the type of content it is offering, and working towards offering.

I think the threat to Netflix is more long term, if FB does become an important repository for professionally produced content and decides to grow its library, and add longer-form movies, dramas, comedies etc. But also I think Netflix will start to broaden the type of content it offers as well -- we'll see more celebrity-following, reality-type content start to show up because the economics are great. But i think that's still a little while out.
Reply | Post Message | MESSAGES LIST | START A BOARD