In another move tied to a bigger crackdown on alleged illegal streaming services, several major US studios and programmers have banded together to file a lawsuit against Omniverse One World Television, a company that, they allege, is "powering" an array of relatively inexpensive OTT-TV services illegally.

The lawsuit, filed Thursday in the US District Court/Central District of California, Western Division, alleges that Kansas City, Mo.-based Omniverse and its top exec, Jason DeMeo, are distributing copyrighted movies and TV shows without authorization to third parties under a sub-licencing arrangement. The suit claims that this alleged illegal setup is now delivering pay-TV services to "an already large, and rapidly growing, number of end users." The suit didn't disclose or otherwise estimate what that "already large" number was.

Variety, the first to report on the lawsuit, has posted a copy of the complaint here. The Alliance for Creativity and Entertainment (ACE) -- a legal consortium consisting of several programmers, studios and OTT players such as Hulu, Amazon and Netflix -- confirmed that it is running point on the suit. The complaint lists the following companies, all ACE members, as plaintiffs: Paramount Pictures, Columbia Pictures, Disney Enterprises, Twentieth Century Fox Film, Warner Bros. Entertainment, Universal City Studios, Universal Television and Universal Content Productions.

The suit (Case No. 2:19-cv-01156), identifies several OTT-TV services claiming to be "powered by Omniverse," including SkyStream TV, Flixon and Silicon Dust's HDHomeRun service. Other known Omniverse partners include TikiLive, VivaLiveTV and Clikia. 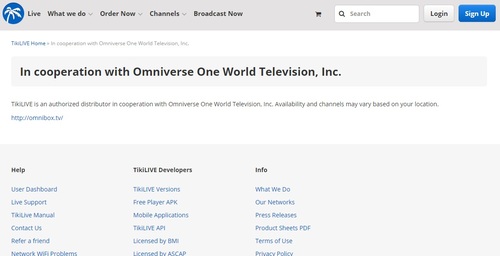 The sites of OTT-TV services like TikiLive are clear in their association with Omniverse. The suit filed by the programmers and studios allege that Omniverse does not have authority to sub-license their programming to third parties.

Some Omniverse partners already considering options
A bad result at the court could spell doom for those services or at least be extremely problematic and cause them to seek out alternatives.

Johnny Falcones, chairman and CEO of Viva Entertainment, said via email that his company does have a plan for dealing with the Omniverse lawsuit. When asked to elaborate, he added that it's "early" into that process and that the company is "doing our homework."

Last year, Viva Entertainment revealed in Securities and Exchange Commission (SEC) filings that it has a content and technology services agreement with Comcast Technology Solutions . There's no evidence yet to suggest that this agreement does or could later include distribution rights to TV programming. A source from Comcast familiar with the arrangement with Viva Entertainment said the agreement is more tech-focused for elements like video streaming service "workflows." (See What Is Comcast Doing With VivaLiveTV? )

"We are still evaluating the current situation and will be in a position to comment in the near future," Clikia CEO David Loflin told Light Reading when asked for comment on the lawsuit.

Light Reading has reached out to Omniverse for comment. We'll update the story if we get a response.

Update: Omniverse issued a statement on February 19 that it "disagrees with the substance and the specifics of the allegations" in the ACE complaint, but is "highly supportive" of ACE's and the plaintiffs's mission. "Consistent with our shared goals for the industry, Omniverse intends to engage quickly and constructively with the plaintiffs and their legal counsel to resolve their concerns with Omniverse's business and where possible support them in their greater goal of eliminating piracy from our industry. It is our belief that when this process is complete, that both sides will be satisfied with the outcome."

Light Reading has left messages with Omniverse's legal representation based in Winter Park, Fla., for further comment and for more detail about the distribution rights that Omniverse believes it has.

The lawsuit claims that this legal action goes beyond just an infringing, consumer-facing service akin to the Dragon Box, which recently settled with ACE. It alleges that Omniverse instead operates "at a higher level in the supply chain of infringing content -- recruiting numerous downstream services like Dragon Box into the illicit market and providing them with access to unauthorized streams of copyrighted content." (See ACE Slays the Dragon Box and Netflix-Backed ACE Sinks Another Video Piracy Threat .)

The suit characterizes Omniverse as a "hub" and the downstream services (like SkyStream) as the "spokes."

"Omniverse's offering is illegal, it is growing, and it undermines the legitimate market for licensed services," the suit alleges.

When asked about Omniverse's approach several months ago, an exec with an OTT service familiar with Omniverse told Light Reading the company operated in a "gray area" that was cause for concern.

The suit alleges further that Omniverse misrepresents to those downstream services that it has the authority to license the content it's distributing. "Omniverse has no such sub-licensing rights," the suit adds, shooting down claims DeMeo made in a recent interview with Cord Cutter News that Omniverse has "acquired the rights" to sub-license certain channels to white-label partners.

"Plaintiffs have not granted licenses that permit Defendant DeMeo or Omniverse to stream the Copyrighted Works or sublicense streams to whatever counterparty they wish," the suit says.

The suit also claims that DeMeo and Omniverse, prior to their deals with these third parties, had offered their own "infringing direct-to-consumer service" via a device branded as the OmniBox, and used it to sell "hundreds or thousands of live and on-demand channels" for less than $25 per month, plus the one-time purchase of the box.

For more on the OmniBox, see the YouTube video below that appears to have been posted by DeMeo in 2012.

Jeff Baumgartner 2/19/2019 | 6:30:42 PM
Omniverse comment We've updated the story with a statement from Omniverse responding to the complaint. It's vague, but they don't agree with ACE but aim to resolve the dispute quickly. JB
Reply | Post Message | MESSAGES LIST | START A BOARD

Jeff Baumgartner 2/15/2019 | 3:06:51 PM
Re: Injunction Great question, and one I'm sure the Omniverse partners will want to know. Is there a lawyer in the house? JB
Reply | Post Message | MESSAGES LIST | START A BOARD