LAS VEGAS -- Here's a recap of some other news and views from this week's tech-fest in Sin City: 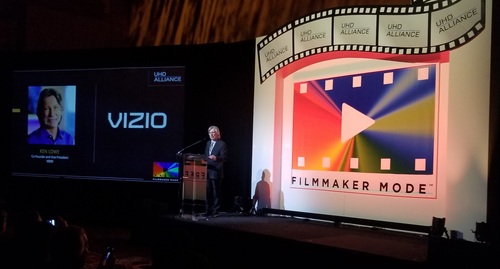 The general idea behind FMM is to eliminate motion interpolation, a video processing technique that can cause motion-blur in HDTVs, as the home entertainment market gets flooded with premium OTT video services. For streaming content that supports the specs, TVs will be made to automatically go to FMM or allow consumers to toggle to that mode manually.

FMM was introduced last August. Here at a press event Monday, UHD Alliance, which counts Charter Communications among its backers, said FMM has received endorsements from a handful of Hollywood-focused organizations -- The Directors Guild of America, The Film Foundation, the International Cinematographers Guild and the American Society of Cinematographers.

FMM will also be supported by an initial set of TV makers -- LG Electronics, Panasonic and Vizio. LG, for example, will include FMM in all new 8K and 4K TVs introduced in 2020, said Tim Alessi, LG's senior director of marketing. Panasonic will start FMM support on 2020 OLED TVs, and Vizio is working to add FMM as an automated feature and as a manual option for consumers in its TV models, said Ken Lowe, co-founder and VP at Vizio.

Pinoskij 4/9/2020 | 1:29:07 PM
Nice Nice information my friend thank you so much and good luck i will share this now, this is important for me good luck bro.  free online, good luck.
Reply | Post Message | MESSAGES LIST | START A BOARD