After cutting its teeth on 4K with VoD fare, Comcast is now ready to bite into its first live TV offering in the pixel-packed format.

Comcast said it would use its X1 platform to offer live 4K coverage in both English and Spanish for the FIFA Women's World Cup from Fox and Telemundo of all 52 tournament matches. The 2019 Women's World Cup gets underway today as tourney host France takes on South Korea. 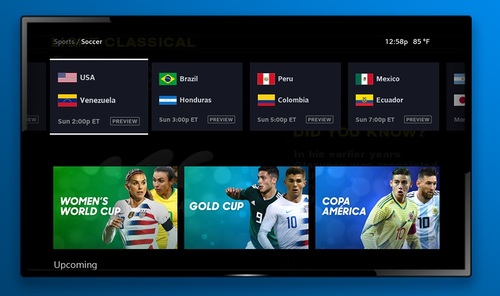 Alongside its 4K coverage, Comcast will also use its X1 platform to aggregate access to live matches, replays, stats, news and other features and coverage tied to the FIFA 2019 Women's World Cup

Comcast will deliver the 4K streams into homes via its managed IP network (not OTT). A company official said those streams would be encoded in HEVC at a bit rate of 18 Mbit/s.

The 2019 FIFA Women's World Cup marks the first time Comcast will deliver live 4K TV, and will likely set the stage for more live coverage in the advanced format.

Comcast has been offering a mix of 4K content via VoD, including coverage from recent past Olympic games and World Cup tournaments, as well as from OTT-delivered apps such as Netflix, YouTube and Amazon Prime Video.

While this is a first for Comcast, it's not the only US pay-TV provider offering live coverage of the 2019 Women's World Cup. Dish Network and fuboTV are among others that have announced plans to provide 4K coverage of the tournament from France.

Update: According to Fox Sports, other MVPDs that are distributing Women's World Cup coverage in 4K include DirecTV and Altice USA. The network is also providing 4K streams from the tournament through the Fox Sports app and the Fox Now app.

Update: Verizon is also providing 4K coverage of 52 tournament matches, noting that this also marks the first time that Fios is offering live 4K. To access that 4K coverage, customers will need a Fios TV One set-top and a subscription that includes Fox, FS1 and FS2.

Comcast said it would integrate some other bells and whistles on its X1 for the Women's World Cup:

Hopefully they're gonna settle down in Europe as well.

Great with new competition on the market!