Verizon explains exactly how it will make money from 5G

Verizon hosted a strategy session for investors this week, detailing its 5G network upgrade efforts and  perhaps more importantly  how it plans to make money from the construction of that network.

In a response to questions from analysts on the topic, Verizon CFO Matthew Ellis said that the operator expects to recoup its investment into 5G.

Much of Verizon's presentation focused on the operator's 5G network and its efforts to improve services on both its lowband spectrum holdings as well as its highband, millimeter wave (mmWave) spectrum holdings.

Overall, Malady said that Verizon has managed to keep pace with its customers' data demands, even in the face of rising network usage stemming from stay-at-home orders sparked by the pandemic.

Verizon updated the chart it published earlier this year, arguing its network capacity has increased since then. Click here for a larger version of this image.
(Source: Verizon)

"COVID really shifted our usage patterns," Malady explained. "People moved out of urban [areas] and moved into rural and suburban [areas] during the pandemic."

He said the operator responded by adding more capacity to its network than it had previously planned. Verizon is in part using the newly freed CBRS spectrum band to add capacity to its 4G network.

Verizon said it added extra capacity to its 4G network due to the pandemic. Click here for a larger version of this image.
(Source: Verizon)

As for 5G, Malady said Verizon continues to work to expand its coverage area and increase speeds. He said the operator's recent deployment of Dynamic Spectrum Sharing (DSS) on Verizon's lowband 5G network has not affected customers' overall speeds.

Verizon used DSS technology to offer a 5G signal nationwide in conjunction with the launch of the 5G-capable iPhone. Click here for a larger version of this image.
(Source: Verizon)

Verizon officials have said that the operator's lowband 5G network isn't much faster than its 4G network, at least so far.

As for Verizon's blazing-fast mmWave 5G network, Malady said that the operator continues to add additional cell sites to that network.

"The team has built a machine over the past 18 months that is allowing us to put up thousands of Ultra Wideband [the brand Verizon has applied to its mmWave 5G service] sites per month," he said. "In some cases we're putting on several hundred Ultra Wideband sites per day."

Malady did not provide firm numbers for Verizon's efforts.

Verizon said it deployed the same number of basestations during the third quarter of this year as it did during all of 2019. Click here for a larger version of this image.
(Source: Verizon)

"Investors should be asking for this Verizon slide to be re-released with y-axis that has data," tweeted Walter Piecyk, a financial analyst with LightShed Partners who attended Verizon's event.

It's worth noting that the financial analysts at New Street Research recently estimated that Verizon covers around 1.8 million people with mmWave 5G services, or less than 1% of the country's population.

Verizon, for its part, said it remains on track to cover "parts" of 60 cities with mmWave 5G by the end of this year. The company has not yet disclosed its 2021 5G buildout targets; it is expected to do so early next year.

Verizon is also expected to dramatically expand its 5G spectrum holdings via purchases of licenses in the upcoming C-band auction. Indeed, the company just this week sold a whopping $12 billion in bonds in part to fund spectrum acquisitions.

Ronan Dunne, the head of Verizon's consumer-focused business, offered perhaps the clearest insight yet on how Verizon expects to make money from the sale of 5G-capable smartphones to consumers.

When it first launched 5G, Verizon said it would charge an extra $10 per month for 5G services. The operator did apply that fee to its cheapest unlimited data plan, and earlier this year had hinted that it would do so on its more expensive unlimited plans. However, Verizon's newest unlimited plans do not include that stipulation, which indicates that Verizon has backed off its initial plan to charge extra for 5G across all its plans.

However, Dunne explained that Verizon will make money from 5G by using it to entice customers to upgrade to its more expensive unlimited plans, which offer 5G for no extra cost. 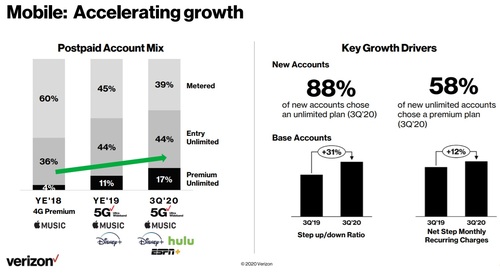 Verizon is working to encourage customers to subscribe to its more expensive unlimited data plans, in part by dangling the option of 5G access alongside services like Disney+. Click here for a larger version of this image.
(Source: Verizon)

Described as "step-up economics," Dunne said that around 58% of Verizon's new customers in the third quarter selected one of its premium, 5G-capable plans. He added that the operator is on pace to get close to 19% of all of its postpaid customers to subscribe to Verizon's premium plans by the end of the year.

Importantly, he said that Verizon sees average revenues per user increase by a "high single-digit dollar" amount when customers upgrade to a premium unlimited plan.

"That's the model that is driving the real accelerated value proposition inside the base, and is the core of our confidence of our growth around our service revenues," Dunne said.

Another potential source of 5G revenues for Verizon is the operator's fixed wireless access (FWA) service, dubbed 5G Home, which competes directly with other wired, in-home broadband offerings. Verizon launched the service in 2018 but recently began expanding it to more cities because of the introduction of new Qualcomm equipment that can transmit signals farther, as well as a new installation process that customers can do themselves.

"We're really happy with that," Dunne said of Verizon's refreshed 5G Home offering. Over the next 5-7 years Verizon hopes to expand the offering to fully 30 million US households, or around 38% of the entire US population.

Verizon officials reiterated that the company expects to record meaningful revenues from 5G Home starting in 2021.

Verizon officials have said the operator expects to begin recording meaningful revenues from MEC starting in 2022.