MADRID -- Network Virtualization Europe -- Telefónica is edging closer towards a distributed telco cloud with the deployment of disaggregated access network infrastructure and compute resources in a select number of its central offices across Spain, executives from the operator revealed this week.

The operator has been working for some time on a revamp of local exchange facilities, and the development of more efficient video and broadband service delivery, under a program called OnLife, which uses the CORD (Central Office Re-architected as a Data Center) model as a guide.

Now, having conducted some tests with a small number of live customers from three OnLife Pods, including a central office in Madrid, the operator is ready to: Expand its rollout to additional central office facilities; deliver services from its open access 'CTpd' architecture to up to 500 paying customers; and begin the process of revamping 1,000 central offices to become edge computing hubs. (CTpd, by the way, stands for Central Telefónica de procesamiento de datos -- it sounds so much sexier in Spanish, right?)

Alfonso Carillo, Chief Architect at the OnLife project, noted that the "open and modular architecture" designed for the next-gen central offices -- which incorporates servers, switches and passive optical networking (PON) broadband access equipment built to OCP (Open Compute Project) specifications -- will support residential enterprise and mobile access services, perform traffic filtering and other functions at the edge of the network, and provide the platform to host a range of service developed by Telefónica and third party partners. One such potential partner is Amazon. (See Telefónica in edge talks with Amazon Greengrass.)

And, of course, it's designed to reduce costs compared with current deployment models. But is there any evidence from the early trials of such efficiencies? Carillo said there would certainly be "significant" capex savings once larger volumes of customers are supported with the new CTpd system, but that analysis of potential opex savings are "ongoing."

The capex savings come from the modular design of the CTpd rack, which will be pre-integrated and pre-loaded with "open hardware nothing proprietary," before being installed in the central offices, so that the rack needs only to be hooked up to the power supply and the transport network links. The rack comprises OCP servers and switches with 40 Gbit/s network interfaces and OCP xPON OLT (optical line terminal) units to provide fixed broadband services. "The 48-port GPON blades are very dumb boxes -- all the control is outside the box and it's very easy to program" using the ONF's vOLTHA (Virtual Optical Line Termination Hardware Abstraction) software to manage the virtual OLT VNF. "We are piggybacking on AT&T's work here," he added. (See AT&T Hits Milestone on Software-Defined Access.)

Ready to plug and play 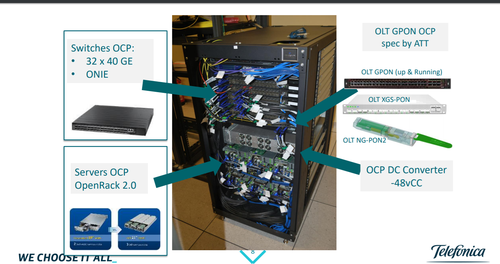 An OnLife CTpd rack of OCP server, switch and OLT elements (image from a November 2017 presentation).

The operator has the GPON blades up and running and is currently trialing XGS-PON.

In addition to vOLTHA, Telefónica is using the Open Source MANO (OSM) code (to which it contributes) for orchestration, Openflow for SDN capabilities, Open Nebula for cloud management and Ubuntu as the server operating system. (See ETSI's Open Source MANO Gets a Makeover.)

Carillo also noted that a revamped central office would not look or feel like a mini version of a centralized data center. "It won't have hundreds of servers it will be possible to provide services with three or four [CTpd] racks," he said.

David Artuñedo, CEO at OnLife Networks, then stepped in to talk about the service potential of the next-gen central office. By having the compute resources closer to the customer, a latency of below four milliseconds is not only possible but "guaranteed" over a fiber connection to a home or business, compared with 50 milliseconds from the public cloud.

That's enabling the OnLife team to test various applications, including virtual and augmented reality, streaming video gaming and industrial applications. Those tests will extend to two additional OnLife pods later this year, including one in Malaga.

Artuñedo also noted that the OnLife team is also working very closely with various industry initiatives: It has a CTpd rack installed as part of a Telecom Infra Project (TIP) Community Lab trial at Facebook's Menlo Park facilities, and is involved in an ETSI MEC (multi-access edge computing) trial for private LTE and 5G applications at BT's Adastral Park labs. There are also plans to participate in a 5G testbed as part of a European consortium effort.

In many ways Telefónica is at the vanguard of such developments, helped by having the same technology leader, Enrique Blanco (now group CTIO), at the helm of its virtualization efforts. The Spanish telco's efforts have not been without challenges, but Blanco's drive and determination are paying off.