How and why FedEx is getting into edge computing, 5G

Today you can ship a package through FedEx. In the near future, you might run an augmented reality application through a data center running inside a FedEx distribution center.

And, at some point in the future, there is certainly the potential for 5G operators to run their network functions inside of data centers secured by FedEx.

At least, those are some of the broad takeaways from an announcement recently from delivery company FedEx, computer and software provider Dell Technologies, and data center vendor Switch. The companies said they will begin building mini edge computing data centers supplied by Switch on land owned by FedEx, and running software provided by Dell.

They'll start in Memphis, Tennessee, and expand to an unspecified number of locations thereafter.

Robots at the edge

So what will these mini data centers do? First, they're going to run FedEx's computer programs. "FedEx has numerous initiatives in progress that can benefit from high density and highly resilient edge computing," a FedEx spokesperson wrote in response to questions from Light Reading. "Examples would include advanced automation, robotics and RFID [radio frequency identification, often used for package tracking], among others. All of these technologies generate and consume massive amounts of data near the edge of our network."

Rob Carter, FedEx's EVP and CIO, offered additional clarity on the company's plans to Bloomberg. He said the shipping provider will use Switch's edge computing data centers to process information generated by the delivery robots the company is currently testing.

FedEx's plans help highlight a major new trend in the cloud computing industry: the move toward the edge. The trend represents a major new wrinkle in the cloud computing sector  currently dominated by the likes of Amazon and Microsoft  because it would shift computing operations from massive data centers in major metropolitan cities into smaller locations scattered around the country and the world. This kind of design would reduce network latency, or the time it takes for a user's information request to be answered by a computer, by physically locating computing resources closer to users.

"Since FedEx operates at the intersection of the physical and digital worlds, there is an increasing amount of data that is generated and consumed within our operational facilities," FedEx explained to Light Reading. "The primary benefits of this new edge computing initiative are: Provide low latency access to a highly resilient computing environment to store and access the data needed to operate our logistics network; and allow us to transform our digital network that interconnects thousands of FedEx locations for greater efficiency and lower cost."

Now, here's where things get interesting: Switch said FedEx will use its Switch MOD 15 mini data center for the effort. As noted by Data Center Frontier, Switch's mini data centers aren't any wider than 15 feet and are light enough to be transported on airplanes. FedEx said it will provide the real estate and a portion of the construction and infrastructure costs to build the data centers in its facilities. 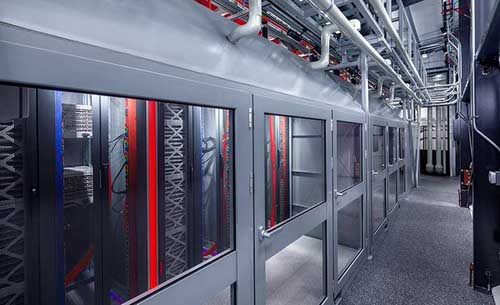 And for those fans of the movie The Terminator, Switch has developed 6-foot-tall autonomous robots, outfitted with night vision goggles and motion sensors, to patrol its data centers. The company did not answer questions about whether its "Sentry" robots would patrol FedEx's edge computing facilities. 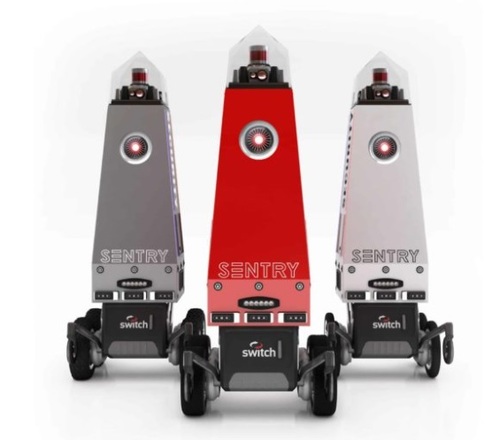 5G as a customer

But FedEx won't be the only customer using the data centers. Dell, Switch and FedEx plan to rent space within those edge computing data centers to other enterprises looking for the low-latency capabilities such designs can support.

"This initiative will focus on bringing multi-cloud resources and exascale compute power closer to where customers run their businesses," the companies explained in their release. "Taking this approach allows organizations to make real-time decisions using capabilities like artificial intelligence, machine learning and 5G."

Thus, FedEx, Switch and Dell will compete with the likes of Verizon, EdgeConneX, American Tower and others that are also building small data centers around the country for edge computing services.

And, as FedEx, Switch and Dell explained, 5G is widely viewed as a major factor in edge computing offerings. After all, the blazing-fast speeds of 5G would be hampered by the need to send computing requests to far-flung data centers.

But 5G network operators are also viewed as prime customers for edge computing services because they may need to house extensive computing functions near their cell sites. Thus, the FedEx, Switch and Dell partnership could set up the potential for a 5G operator like T-Mobile or Dish Network to purchase computing resources inside the edge computing data centers that FedEx, Switch and Dell are building in order to run the network functions necessary to operate a 5G network.

"For pricing edge capacity, expect Switch to price similarly to its core colocation facilities of $2,400 per cabinet/month, and in the Switch sites there are expected to be about 24 cabinets," wrote the financial analysts at Credit Suisse in a recent note to investors following Switch's deal with FedEx. "On coverage costs and breakeven, as long as two customers deploy into each edge data center facility Switch hits its breakeven and the following business could vary depending on product/service/requirements ... On next steps, Switch is engaged with several more potential prospects and expects to release several new announcements on its edge data center developments in the near future and notes that in each major metro there is expected to be five to six micro data centers supporting core telecom networks. The importance of edge sites only increase with 5G deployments."

There's one final element to consider in the new announcement among FedEx, Switch and Dell, and that's whether FedEx might use its new edge computing resources for some kind of private wireless network for its own operations.

After all, private wireless networking is the newest, hottest trend in the 5G industry, as it allows enterprises like FedEx to construct their own private networks for their own internal uses. Already enterprises ranging from UPS to John Deere are toying with such networks, given that they support high-speed, latency-sensitive services like manufacturing operations and robots.

The FedEx representative declined to answer any questions from Light Reading on FedEx's networking operations and needs, including how it might purchase wireless services from commercial operators and whether it might be dabbling in the notion of owning its own wireless network in select locations.

If FedEx does indeed embark on some kind of private wireless 5G effort, the company would undoubtedly leverage its new edge computing data centers for the effort.