Telco partners Deutsche Telekom and SK Telecom have struck a co-investment agreement that will provide fresh cash injections and Tier 1 operator support to two startups that are focused on key areas of 5G platform development.

South Korea's SK Telecom (Nasdaq: SKM) (SKT) is to invest an unspecified sum in MobiledgeX Inc. , the edge computing startup funded since the start of this year by Deutsche Telekom. SKT has previously been identified as a possible investor in MobiledgeX, which is busting a gut to attract the attention of mobile operators in the build-up to MWC 2019. (See MobiledgeX Revs Up & Shifts Into Gear and SKT in Talks With DT to Join MobiledgeX.)

The startup, which is developing a middleware platform that will enable third-party developers to run their applications on edge computing platforms, is also now at the heart of an open source effort that is part of the Telecom Infra Project (TIP) and which is being backed by DT and Intel. (See TIP Forms New Edge Computing Unit.)

Other operators have shown interest in MobiledgeX, including Vodafone and Verizon, while Telefónica has included the Menlo Park, Calif.-based startup's tech in a distributed cloud architecture initiative called CTpd. (See Telefónica Joins the MobiledgeX Fan Club.)

IDQ has been developing quantum key distribution (QKD) security tools for years and its products are seen by SKT and others as being suitable for the demanding security requirements of distributed cloud environments, IoT and 5G. (See Network Security: Innovation in Isolation? and ID Quantique Develops Quantum Crypto.)

It has also been developing optical instrumentation products that can be used to secure optical transport networks: The startup, SKT and Nokia recently announced successful interworking between IDQ's QKD System and Nokia's optical transport system on the SKT network.

IDQ says both SKT and DT, which have been close technology partners since early 2016, are currently "qualifying [its] quantum cryptography technologies on their respective trial networks." 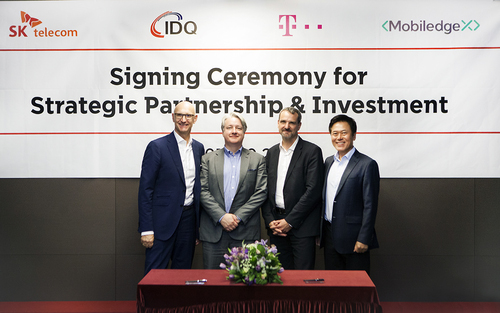 UPDATE: Both Deutsche Telekom and SK Telecom declined to comment on how much they would invest in the startups.

Edge computing and next-gen network security are both very important considerations for network operators as they develop their 5G strategies, but are just two of the many technology and operational process elements that make up the 5G big picture. (See Piecing Together the 5G Big Picture.)