CableLabs Is Building a VR Media Spec... With the Holodeck in Mind

The CableLabs principal architect and futurist flat out announced that she's working on a new media format for glasses-free virtual reality, and didn't back down one iota when her fellow panelists in the session on VR, AR, MR: Identifying the Operator Opportunity at Light Reading's Big Communications Event expressed doubt.

The new specification? It's for delivering content that can be displayed as rays of light directed from a panel in a way that creates image volume and not just a flat two-dimensional image. The goal is to make the spec agnostic of whatever display technology is used and to figure out how to build media delivery networks to support it. At a guess, Hinds says she thinks it will ultimately be possible to deliver content in this form to an 85-inch diagonal display with broadband throughput of 2 gigabits per second.

"CableLabs is working very closely with some of the VFX (visual effects) companies to stand up a spec around a well-used VFX media format," says Hinds. "So all we're doing is we're documenting best practices and using that as a basis for us to architect the networks to support the light field displays."

The existing format Hinds refers to is called ORBX, but she notes that CableLabs will probably rebrand its version with a more user-friendly name. She says CableLabs is aiming for the spec to be ready by the end of this year. 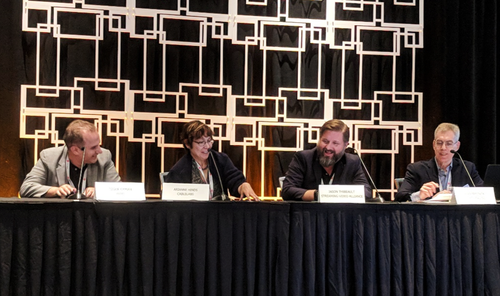 From left to right, Dr. Ozgur Oyman of Intel, Arianne Hinds of CableLabs and Jason Thibeault of the Streaming Video Alliance speak on a panel with Heavy Reading moderator Alan Breznick.

If Hinds is optimistic about creating a new holographic media ecosystem, however, Jason Thibeault, executive director of the Streaming Video Alliance , is less sanguine. To begin with, Thibeault doesn't think it makes sense to create virtual and augmented reality standards today. The technology is changing too fast.

Beyond that, Thibeault cautions that content producers have to be involved in the process of bringing a new media spec to market.

"Because," he explains, "they're going to be the ones to encode in that mezzanine format and distribute. So is it cacheable? Is it not cacheable? How does all that work? Involve them in that process because that will really help draw people into that possible container for producing VR content and you won't have as much backlash from people going 'I don't know what to do with this.'"

Thibeault believes it could take up to two decades to develop a viable market for advanced forms of virtual reality.

But once again Hinds has a much rosier outlook. She's seen the prototype technology and she thinks creating an experience similar to the famed holodeck from Star Trek will be doable in ten years.

Now that would be a big communications event.

silamira 11/22/2019 | 10:52:49 AM
Reply I can't believe I didn't ponder this subject before.  I've got 2 kids from a interracial relationship.  I deal with IR topics daily and I never thought of this.  So I want to toss out some ideas and leave it open to my readers to comment on also.